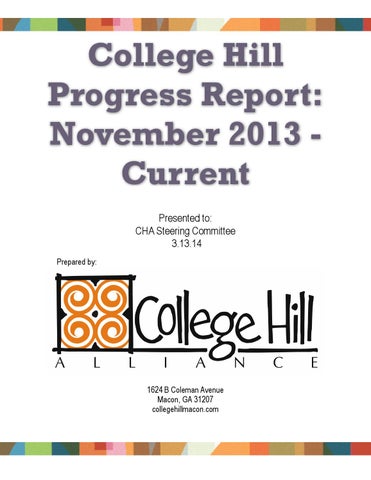 The Basics: Clean, Safe, and Branded Corridor Maps & Monumental Signage Four out of five College Hill wayfinding kiosks, complete with lighted maps, have been installed throughout the Corridor, with the most recent kiosk being moved to a more ideal location on Coleman Hill thanks to additional financial support from the Knight Foundation. The final map will be installed in Tattnall Square Park during TE construction. The signage is funded by a $133,000 Knight Neighborhood Challenge (KNC) grant and will be complete with the addition of two monumental signs on the corners of Tattnall Square Park along Oglethorpe St. Map kiosk installed in Mercer Village

The Basics: 93% Complete! Ninety-three percent of recommendations from The Basics goal area of the College Hill Master Plan are complete, from integrated signage and branded trash receptacles to thriving neighborhood associations and better lighting. Residents, students, and visitors feel safer and play an integral part in weaving the hip and historic social fabric of the Corridor.

The Vibe: College Town Cool Christmas in the Corridor The Christmas in the Corridor event brought over 3,000 diverse visitors to Mercer Village to enjoy food and Christmas cheer as well as a 100 ft. snow slide and snow play area. Attendees ranged from Mercer students to local families, young and old. The College Hill Alliance (CHA) also hosted its first Holiday Maker Fair, with over 20 participants selling local wares. Individual “makers” generated over $1,000 in sales during the four-hour event, while Margarita’s reported their single highest day of sales ever. Christmas in the Corridor also highlighted the benefit of partnering with Mercer University’s Student Government Association, Quadworks, and Village merchants to create events that serve the entire city.

Mardi Gras in Mercer Village Mercer Village transformed into the French Corridor for Mardi Gras in Mercer Village, featuring a full day of Fat Tuesday festivities. Village restaurants became pop-up New Orleans style cafés serving cajun favorites like andouille sausage pizza, crawfish nachos, jambalaya, gumbo, po’ boys, beignets and Hurricanes. The day-long celebration combined festivity with support for the Bears! At 6 p.m. a Mardi Gras style krewe parade of local businesses and student organizations led Mercer fans to Hawkins Arena for the first round of the Atlanta Sun Basketball Championship. Despite the cold weather, the event served as a fantastic pre- and post-game destination. Francar's owners reported generating three times more sales than a usual game night and described the event as “tremendously successful as well as exponentially busier and more profitable than our usual events.” Fountain of Juice owners said, “Mardi Gras at least doubled our business for the day . . . It was fun and great publicity for the Corridor.”

The Vibe: College Town Cool Second Sunday & Bragg Jam CHA is currently working with the Bragg Jam Festival organizers to help sustain Second Sunday. This season Bragg Jam is assisting in booking talent and obtaining best prices. The Alliance has also applied for a KNC grant on behalf of Bragg Jam to provide a â&#x20AC;&#x153;funding safety netâ&#x20AC;? during the event's transition. If the grant is awarded, Bragg Jam will assume all costs of talent this year. In 2015, they will take on talent as well as production expenses. Second Sunday Finale with Percy Sledge Photo credit: Maryann Bates

Music Ambassadors: Macon CHA continues its collaboration with the KNC-funded Music Ambassadors: Macon program by promoting and assisting in the implementation of several free shows in as well as house concerts. Since October 2014, the Alliance has focused efforts related to the program on encouraging student participation through targeted marketing and arranging lunch specials with Mercer Village merchants. Bombadil performing in Mercer Village

The Connection: Cooling the Streets TE is Underway! CHA continues to be an active channel of communication between residents, Alexander II Elementary School, project managers, and city officials. The Alliance offer frequent updates on progress via social media outlets as well as by directing questions to relevant sources of information. Plans to reschedule the official groundbreaking ceremony are underway with various stakeholders participating.

Stumble Into Fun The Alliance is working with a Washington, D.C.-based public art consultant to install temporary pieces that will connect Mercer University to Downtown Macon and encourage people to get out of their cars and explore the area on foot. One of the projects this consultant oversaw was National Yarn Bomb Day in Rosslyn, Virginia. Over 100 local volunteers were coordinated to stitch up an area connecting a local metro station to a performing arts center.

Bike Sharrow Update & Expansion CHA received a Knight Neighborhood Challenge grant to replace the original painted sharrows with more durable and long-lasting thermoplastic units as well as to extend the route connecting all of College St. before ending at Riverside Drive. A total of 70 sharrows have been installed along two routes. The first route begins on Montpelier Ave. at Mercer Village, continues along College St., and then follows Forsyth St. before ending at City Hall. This route will replace the painted sharrows that have faded. The second route connects with the first at the intersection of College and Forsyth Streets, and continues along College St. before ending at Riverside Dr.

Focusing Neighborhood Engagement During the College Hill Master Plan refresh an opportunity arose to engage new leadership in both the Pleasant Hill neighborhood and at the Medical Center of Central Georgia. Since then, the Alliance has focused outreach and programming efforts to ensure those constituents are aware of College Hill happenings and are fully integrated into the Corridor before the Alliance sunsets.

The Work: The Future of Entrepreneurship & Innovation in Macon The Next Big Idea The Next Big Idea business plan competition is a new initiative of College Hill Alliance aimed at encouraging college students in Central Georgia to become entrepreneurs in the region. Six colleges and universities are participating: Central Georgia Technical College, Fort Valley State University, Georgia College, Mercer University, Middle Georgia State College and Wesleyan College. There are currently 42 student teams registered, with business ideas ranging from a pop-up concert business to a gluten-free bakery. The semi-finalists from each school will be announced on March 21 and compete during a live pitch competition, on April 5 at Mercer University, for the grand prize of $10,000.

The Makers Movement After intensive research, interviews, and surveys with respondents asking for ways to meet “people like me,” CHA has started offering networking events, called Makers Mingles for “makers” and small businesses owners in the area. The events offer a more casual and hip alternative to the traditional business afterhours style events. The first Mingle was held in late February and was attended by more than 15 makers who shared ideas, stories, and resources.

Small Business Meetup In an effort to support local entrepreneurship, the College Hill Alliance is hosting Small Business Meetups designed to encourage business owners to connect in a relaxed atmosphere. The first meetup was held on March 7 and brought together over 40 entrepreneurs at the Tic Toc Room in Downtown Macon. The next meetup will occur on April 4 and continue to serve as a place for business owners to mingle as well as suggest topics for future meetings. The events are hosted in conjunction with the Technology Association of Georgia.

The Work: The Future of Entrepreneurship & Innovation in Macon

In partnership with the mayor's office, the Alliance is working to promote the tools that Google offers for entrepreneurs, which range for events to free website design. Macon has officially partnered with Google for the Get Your Business Online City Challenge. Throughout the upcoming months, CHA will be encouraging local businesses to make sure they have a presence online via a functional, up-to-date website. Two events sponsored by Google that the Alliance is expanding into Macon: • Lemonade Day: The Alliance is working in partnership with the Greater Macon Chamber to create a Macon Lemonade Day, an event designed to encourage youth entrepreneurship by teaching kids how to start, own and operate their own business, a lemonade stand. • Start-up Weekend: CHA staff will be attending Athens Start-up Weekend to learn more about the event and how it can be brought to Macon. Start-up Weekend is a 72-hour crash course in entrepreneurship. The event allows participants to pitch their business ideas and then form teams to implement the best of those ideas, from product development to marketing.

Start-Up Land After auditing the process of starting a new business in Macon, CHA created a “roadmap” for local entrepreneurs to help streamline their start-up process. Start-Up Land was created to help simplify the path for new businesses and help direct them to the appropriate resources. The map is available in both a print and interactive digital version. The final edits are being made and the pieces will be ready for distribution within the next few months.

A GUIDE TO launching your NEW BUSINESS IN MACON 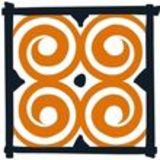 The latest quarterly update on College Hill Corridor projects presented to the Steering Committee on March 13.

The latest quarterly update on College Hill Corridor projects presented to the Steering Committee on March 13.