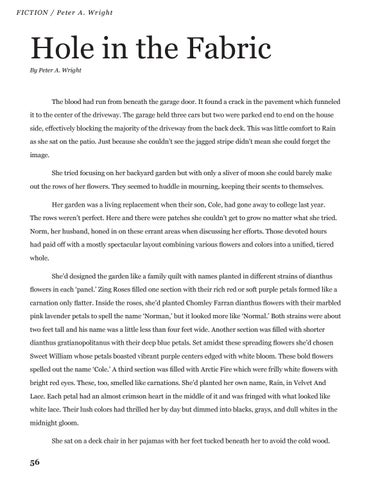 Hole in the Fabric By Peter A. Wright

The blood had run from beneath the garage door. It found a crack in the pavement which funneled it to the center of the driveway. The garage held three cars but two were parked end to end on the house side, effectively blocking the majority of the driveway from the back deck. This was little comfort to Rain as she sat on the patio. Just because she couldn’t see the jagged stripe didn’t mean she could forget the image. She tried focusing on her backyard garden but with only a sliver of moon she could barely make out the rows of her flowers. They seemed to huddle in mourning, keeping their scents to themselves. Her garden was a living replacement when their son, Cole, had gone away to college last year. The rows weren’t perfect. Here and there were patches she couldn’t get to grow no matter what she tried. Norm, her husband, honed in on these errant areas when discussing her efforts. Those devoted hours had paid off with a mostly spectacular layout combining various flowers and colors into a unified, tiered whole. She’d designed the garden like a family quilt with names planted in different strains of dianthus flowers in each ‘panel.’ Zing Roses filled one section with their rich red or soft purple petals formed like a carnation only flatter. Inside the roses, she’d planted Chomley Farran dianthus flowers with their marbled pink lavender petals to spell the name ‘Norman,’ but it looked more like ‘Normal.’ Both strains were about two feet tall and his name was a little less than four feet wide. Another section was filled with shorter dianthus gratianopolitanus with their deep blue petals. Set amidst these spreading flowers she’d chosen Sweet William whose petals boasted vibrant purple centers edged with white bloom. These bold flowers spelled out the name ‘Cole.’ A third section was filled with Arctic Fire which were frilly white flowers with bright red eyes. These, too, smelled like carnations. She’d planted her own name, Rain, in Velvet And Lace. Each petal had an almost crimson heart in the middle of it and was fringed with what looked like white lace. Their lush colors had thrilled her by day but dimmed into blacks, grays, and dull whites in the midnight gloom. She sat on a deck chair in her pajamas with her feet tucked beneath her to avoid the cold wood.