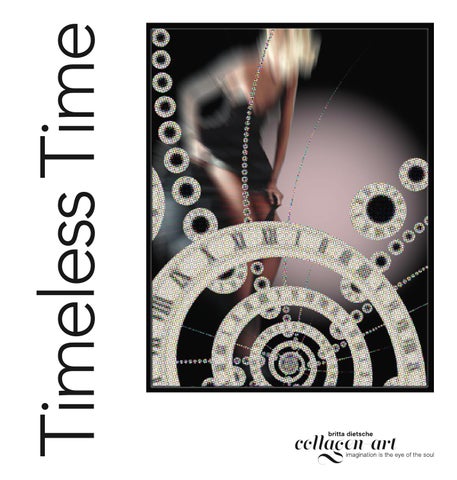 The artistic research of Britta Dietsche is a constant enquiry into the use of collage, a technique characteristic of the avant-garde movements, and its relation to the recent developments of the new media. A self-taught artist now active for more than 25 years, Britta Dietsche elaborates a very personal language to investigate typical issues of contemporary society. Its personal practice is a perfect expression of the most recent developments of collage, the art technique consisting of associating various materials such as photographs or other fragments, which is currently undergoing a process of deep transformation. Born in the beginning of the 20th century, collage is one of the most important contributions of the Dadaist and Cubist movements to Western art. Discovered by some very innovative artists, such as Pablo Picasso, George Grosz and Hannah Höch, its diffusion was also the consequence of an unprecedented availability of images, due to the appearance of two major technical innovations: photography and a fast printing process. As a result, for the very first time artists had the possibility to reuse large amounts of images to produce new compositions. At the end of the 20th century, a similar breakthrough occurred with the diffusion of digital media and internet, which offered to the artists incredible new possibilities in dealing with uncountable images, freely available and easily reproducible. Britta Dietsche’s career as an artist began during this period of fast innovation. Fascinated from the beginning by the collage as a possibility to shape surprising compositions, in the first phase of her experimentations she developed a rather traditional approach to this medium, with works recalling renown Pop art pieces such as Richard Hamilton’s “Just what is it that makes today‘s homes so different, so appealing?”.

Since 2010, the new media gained an increasing importance in her work, manifested in an astonishing production of large format images. Britta shifted from reusing magazines and other materials to the reemployment of digital images, either selected from the internet or self-produced, which are consequently reworked by means of computer programs and new media tools, exploring thus the possibilities offered by this wide range of new technologies. The new media permeates all aspects of daily experience and are a very appropriate way to express issues characteristic of contemporary life. This is especially true in the research that Britta Dietsche conducts on topics related to temporality. The general acceleration of the flow of time, which characterizes contemporary society, is indeed one of the most incisive consequences of the apparition of the new technologies. Computers and other electronic devices, created to optimize human tasks, have quickly destroyed the barriers which traditionally divided working and resting time, fostering the general need of a higher productivity. Through intimate and archetypal images, Britta Dietsche defines two different temporalities. On the one hand, the numeric time, measurable and quantifiable, characterizes aspects of life such as work, production and often also consumption. On the other hand, the subjective temporality is the place where intimate experiences occur and sensorial life is nourished. This distinction, brilliantly described by the artist, recalls the concepts of Kronos and Kairos developed by the Ancient Greeks. While Kronos designated the impersonal and destructive flow of time, Kairos embodied the moments of personal experience, the very special occasions that every human being encounters in life.

In Britta Dietsche’s production, numeric time is depicted through the use of the clock, a recurrent object in many of the works of art exhibited in Timeless Time, such as “Time forever”, “No Time” and “Ice Time”. In other pieces, such as “Main Station”, time is divided into its main components, the numbers, which basically offer a measure for everything. “Sleeping numbers” is a reference to holidays, where, for a very short lapse of time, the calculations of daily life are suspended. The two pieces entitled “In a hurry” express clearly the overwhelming presence of measurable time. In these images, the clock is opposed to the charm and natural beauty symbolized by a feminine figure, an archetypal representation of the sensitive perception and the delicate splendor of the instant. Out of focus, the silhouette evokes the presence of a fleeting gaze. Similarly, “Mirror mirror” stages the presence of the viewer observing a beautiful woman through a grid formed by a clock. These images question the possibility of measuring the experience of beauty, which is fleeting and always different, and is therefore quintessential of the intimate sphere. The subjective time is also where playfulness and dreams appear, where temporality is momentarily suspended and decomposed. These issues are perfectly expressed by “Teddy in Arosa”, a calm landscape inhabited by sleeping toys. Similarly, in “Wonderworld”, the clock opens on a dreamlike cave, adorned with crystals and jewels. “Northpole” is a praise of sensual life, with a graceful silhouette redoubled over an iceberg, whose mass invades our gaze with its slow coldness. “Icebergs”, growing over the course of millennia, are archetypal images of the rhythm of natural life, testifying the existence of temporal dimensions, hardly graspable by the human mind. This image also pays homage to the American photographer Lynn Davis, who deeply inspired the artistic researches of Britta Dietsche. Temporality is completely suspended in “Lost Face”, which stages the surreal and mysterious side of feminine representation, with a mesmerizing face slowly disappearing in the landscape. In the traditional collage, the appropriation of an image often implies the destruction of the previous support and consequently every selected element can only be used once. With the spread of the new media, it is possible to reproduce and rework a cliché through a never-ending process. By applying several filters and patterns to the same initial image, Britta Dietsche produces variegated pictures, each one with its very own atmosphere.

This artistic practice also has a strong symbolic value if studied in the broad context of Dietsche’s long-term research. Indeed, the continuous quest for differentiation, for nuances and expressive details, is a way to stress the tension between the serial and objective repetition on the one hand and the flow of creativity of the subjective experience on the other. In the series “Twins”, the concept of repetition is questioned at its core. Generally twins are extremely similar beings, although each one has its own individuality. And so are the images produced by the artist in which the repetition is the occasion for infinite variations, each manifesting an individual character. Other artworks, such as “Grammophone”, are a more playful expression of this same problematic. In “Twins II” and “Twins III”, issues of repetition and time clash drastically: clocks cover the faces of redoubled human figures, substituting the very own place of human expression with a kind of surreal and uncanny mask. Using the new media to comment on such issues as time and repetition, Britta Dietsche elaborates artist strategies in which the tool is also partially the subject of the representation. By diverting the new media, which plays a central role in the acceleration of the flow of time and in the general quantification of human activities, the artist opens new spaces for creation and expression. As a brilliant analyst, she demonstrates that art, with its deep concern for beauty and feelings, is the place where an encounter between the machine and the artistic experience can occur through a very innovative synthesis of objectivity and intimate expression. 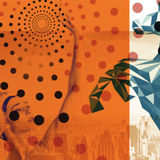 This is the work of Britta Dietsche, a Swiss artist dedicated to collages and new media. These pieces of art will be shown at an exhibition...

This is the work of Britta Dietsche, a Swiss artist dedicated to collages and new media. These pieces of art will be shown at an exhibition...