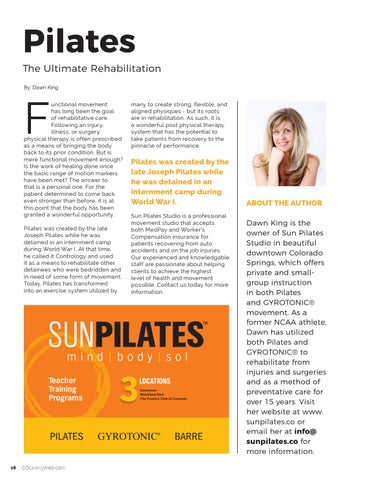 The Ultimate Rehabilitation By: Dawn King

unctional movement has long been the goal of rehabilitative care. Following an injury, illness, or surgery, physical therapy is often prescribed as a means of bringing the body back to its prior condition. But is mere functional movement enough? Is the work of healing done once the basic range of motion markers have been met? The answer to that is a personal one. For the patient determined to come back even stronger than before, it is at this point that the body has been granted a wonderful opportunity. Pilates was created by the late Joseph Pilates while he was detained in an internment camp during World War I. At that time, he called it Contrology and used it as a means to rehabilitate other detainees who were bedridden and in need of some form of movement. Today, Pilates has transformed into an exercise system utilized by

many to create strong, flexible, and aligned physiques - but its roots are in rehabilitation. As such, it is a wonderful post physical therapy system that has the potential to take patients from recovery to the pinnacle of performance.

Pilates was created by the late Joseph Pilates while he was detained in an internment camp during World War I. Sun Pilates Studio is a professional movement studio that accepts both MedPay and Worker’s Compensation insurance for patients recovering from auto accidents and on the job injuries. Our experienced and knowledgable staff are passionate about helping clients to achieve the highest level of health and movement possible. Contact us today for more information.

ABOUT THE AUTHOR Dawn King is the owner of Sun Pilates Studio in beautiful downtown Colorado Springs, which offers private and smallgroup instruction in both Pilates and GYROTONIC® movement. As a former NCAA athlete, Dawn has utilized both Pilates and GYROTONIC® to rehabilitate from injuries and surgeries and as a method of preventative care for over 15 years. Visit her website at www. sunpilates.co or email her at info@ sunpilates.co for more information. 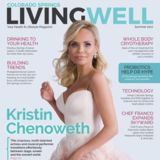