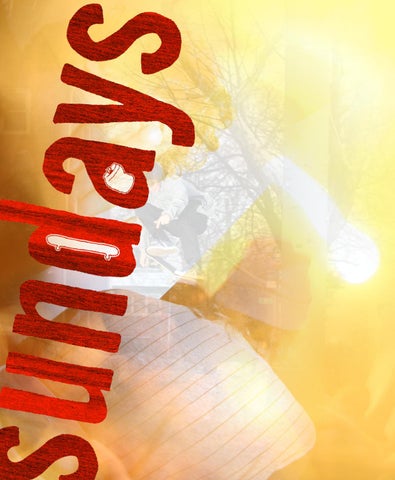 sundays is a zine dedicated to enjoying life. The way we do that is by skating, partying, cooking, bar-be-queing, poorly hitting on ladies and having fun with friends. If you donâ&#x20AC;&#x2122;t want anything to do with that, then you can get the fuck out. This issue is dedicated to skateboarding and skateboarders everywhere, mainly Philadelphia and New York City, as this issue is heavily weighted in both areas. So crack open a fresh one, get the ribs on the bar-be-que, and enjoy.

Up and Coming --- Andrew Wilson

words by max hull Checkin’ out Andrew Wilson It’s hard to put in words, something so visual. Maybe it’s the way he flicks his hair after landing a trick, or perhaps it’s his boyish charm that can seduce any older woman into sleeping with him…even on a couch. Whatever it is, Andrew Wilson’s got it and everyone knows it. Recently Andrew and Johnny, the youngest of the Wilson legacy, came to Philly for a weekend. That same weekend I happen to be borrowing a friends’ HD Camera. My initial goal was to make a sweet HD montage, primarily at FDR, but after the first day of shredding with Andrew and Johnny, I knew they would take over. Each day they were here, I was awoken at 9 am with a text: “Skate?” While everyone else was still sleeping we barged the city, and any spot we went to Andrew was guaranteed to kill, with power, speed, and precision, while Johnny was there to capture it all on camera if he wasn’t killing it himself. It’s extremely exhausting keeping up with Johnny and Andrew as they are, by Paul Overstrom’s definition, Skate Rats. Very conducive Skate Rats. On a side note: Imagine if their parents had had a girl?? wooaahh

words by colin sussingham Headed down to Philly on Thursday night. It was Dylan James, Paul Tucci, and me. We were going down to see Max Hull, Mitchell Wilson, and Conor Prunty. Word on the street was that their friend Jono was coming back to visit Temple (he took the semester off to recover from a broken ankle,) and they were gonna throw a big party for him. They delivered.

there’s a ramp down there so it’s cool, and the living room was a pretty random growing dance scene full of strobe lights and shit. Where was the fog machine at?

We got down to Philly that Thursday night, hung around and got some rest so we could get up early and skate the next morning. We got up at around 9:30, got some coffee and some crepes, skated Cecil for a bit and then drove around for the next 6 hours skating all different shit. After that we went back to get some food and chill before we went back to Conor’s for the party.

I ended up hitting up on this girl, who I soon came to find out was this dude’s girlfriend. So I had to that stop that instantly. I’m not gonna mention any names, but he’s one of the nicest guys I know so if you know who you are I’m sorry man!

At first it looked like it was gonna be a dude night full of skate videos and cheap beer, which isn’t the worst thing in the world but ladies are always a plus. Sooner or later people started showing up and before we knew it we were having us some good ol’ fashion fun. I don’t know how or where disco lights came from but the kitchen/living room was pretty crazy. It was like there were 3 different parties going on at one place. In the hallway you had people doing keg stands and girls teaching you how to roll dice, which looked pretty similar to yankin’ chain. The basement was whatever, but

Two “Lokos” for me and 2 kegs for everyone else is a perfect combination for some wild stuff. I was pretty Loko’d up within minutes and was snapping photos left and right.

I remember saying two things specifically that night. One was “Yo where’s that girl in the red dress?!” about 30 times to the girl in the red dress’s friend. The other thing was when we were leaving I went up to Dylan and said “Yo dude, Max and I are heading out.” Dylan, for no reason might I add, proceeded to slap my camera lens and push me. Luckily I know the signs and symptoms of a very drunk Dylan, (we recall the time he spent in the kitchen cabinet for a while on his 21st birthday) so I gave him a shove back and left. Thirty seconds later Dylan came stumbling out onto Jefferson Street, with absolutely no recollection that he had just slapped my lens. He eventually caught up with Max and I and I let it pass over, but I’ll remember this Dylan.

Light shows, mini skirts, girls licking eachothers faces, and one hell of a messy floor. That just about sums up that whole night. Ladies just to let you know, Max wasn’t shooting photos up your skirts, he was taking shots of the floor. By the end of the night, some dudes from the neighborhood who weren’t invited had showed up and basically started having their own party in the living room. Now I wasn’t there to witness this, but word has it that they were trying to steal some computers and speakers and the cops had to be called. A rare thing for skateboarders to actually have to do, but I heard that Paul Overstrom sent them on their way before things got out of hand, and before the cops showed up. Taking their sweet ass time I’m sure. All I have to say I guess is, “Heck Yeeaah!”

words by dan king Skateboarding in New York City is a type of skateboarding that takes more motivation than other places. You’re skating to the spots for most part, not driving, if you want to skate a spot chances are you are going to get kicked out and if you’re lucky enough to get a try at a spot you will find decrepit streets and gigantic cracks you have to deal with. There are also black holes. For example; Tompkins Square Park, 12th and A, and the newly opened McCarren Park. If you find yourself in any of these places you can plan on being there for a while. You can try to enjoy skateboarding during the few nice months we have here in the city, and in the winter you can pay some money to skate some places indoors or man up and skate through the cold. Skating around here means you will know everyone else that skates around here too. You will see the same people everyday and you might never find out their name. That’s why skateboarding in New York is the best.

I met Paul Tucci through Dylan, and everytime I skate with him he always seems to surprise me. Paul will get to a spot and just start going for it. He’s got the basics down to perfection and will throw a stylish wallie or back feeble down on anything. Paul seems to love 90’s skateboarding, and you can see that in some of the things he does. No he doesn’t rock the baggy pants and small wheels, but he’ll make the most of any spot on the street, and watching him will usually just make you happy. His style is always smooth and quick. Good shit if you ask me. Paul’s usually got some fast little line planning in his head where ever we go. He’ll just be like “Ok. I’ll alley-oop front 180 up that curb, switch crook that ledge and switch back 180 off the curb again. But you’re gonna have to push fast ok?” and I’ll be struggling to keep up with him and film. He helps keep the scene at a good mellow pace. Always encouraging people, never putting people down.

Paul has become our 5th roommate basically. He’s usually in Brooklyn two or three weekends a month, and humbly takes his place on the couch or the lay-z-boy, I’m not sure which one is his favorite. He’s down to watch any skate video, and knows just about everything about every team out there. The good and the bad. I guess that’s the knowledge you gain from working at 2nd Nature. Overall, Paul’s a ripper in my book.

Sun: Worst customer at the shop? PT: sneakerheads with bad attitudes and people who make a mess of the products. Sun: Best Craig story? PT: oh man theres so many, one time he was driving a boat for like a country club or somthing and he got lost and happend to pass by coast gurads and they thought he was stealing the boat. Sun: Blunts or Babes? PT: try to fit both into my schedual Sun: TIght or loose? PT: more on the loose side Sun: Whats with that little metal tube you’re always carrying around, huh? PT: convenience is key Sun: I heard someone puked on your back once? PT: yeah i hate that guy, his names conor or something Sun: Favorite way to pass the time while not skating? PT: painting and working

Sun: Band/Song of choice? PT: been listening to some lou reed recently Sun: Final words? PT: i love you

I’m from Jersey, but went to Spain for a while to try to live and skate there, but had to come back to America, and decided to try my luck in Philly. I got into a school, and started class without having an apartment, or knowing anyone in the city. The commute was too burnt to keep up. Then my homie called me and said his buddy was subletting his place in Philly in a house of skaters, two blocks away from Cecil; a Philly skate meeting point where people gather to skate flat, smoke cigarettes, and skip class. I moved in immediately, and started learning hardflips and shit. We’d watch skate videos all night, and skate Cecil every day. Everything became about skating. It got to where on rainy days, I’d go through withdrawal and be in a daze thinking about skating. I’d skate in my dreams. On weekends skate rats would come to the city to skate and party and crash on the floor, then go skate in the morning. Filmers would show up at the house and we’d all squeeze into a car and go to spots I’d probably never have found. Everything was soul. There were skate video premieres, and skate art shows, and stuff like that. If I ever needed a bearing or bolt or tool, there was probably one in the couch cushions. Next year I’m living in the same place but with even more skate homies. I’m stoked.