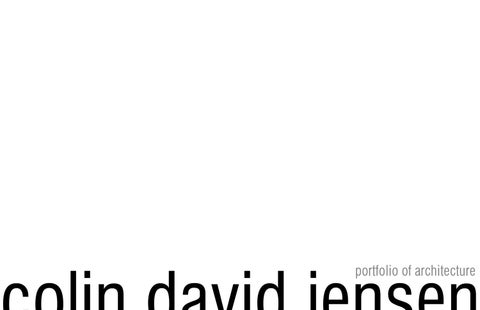 finnish academy for the arts

Posed with the challenge of creating a “resource library” for a suburban neighborhood in SW Portland, I developed a program for a building that sought to connect the neighborhood with craft, fabrication, and cultivation. My so-called “self-sufficiency resource” was called UrbanAg. The building separates itself programmatically into “dirty” and “clean” spaces, where the processes of “making” and “learning” happen respectively. A large and vibrant fabrication space forms the heart of the project, and the architecture is exaggerated in its functionality, with large kinetic components such as track-cranes and large operable openings, all contained within an extroverted red steel structure. The overall project is an exploration in materiality, simplicity, light, and elemental forms of wood, stone, and living matter.

The challenge undertaken in this studio was to create a headquarters for a nonprofit on an infill site in Colombo, Sri Lanka. I conceptualized the fictitious ENDLESSurf company as a progressive nonprofit that advocated for the advancement of the sport of surfing as a means of rehabilitating and empowering youth in underpriviledged coastal areas around the world. The headquarters design featured a program that supported a retail storefront that sold handcrafted balsa boards crafted by local artisans, as well as a rental shop and dispatch for surfing trips to the local coastline. A verdant courtyard integrates the outdoors with the interior components of the project, where breezeways and outdoor circulacircula tion immerse the employees and visitors to the site in lush botanical gardens and water features. A contemporary architectural expression of the building blends aspects of traditional Sri Lankan building heritage with modern materiality and form.

An understanding of regional Sri Lankan architecture was at the forefront of efforts in design development. A free-form design exercise started the conversation, and its product brought to mind ideas of openness, indoor/outdoor spaces, and gestural planes. Further investigation into regional precedents highlighted the importance of climactic response, particularly passive cooling and solar shading. As the concept of a surf shop materialized, the social aspect of the sport galvanized the design.

The Walnut Street Music school answered the call for a building that would support the bustling activity of a childrenâ&#x20AC;&#x2122;s music school, while simultaneously instilling the serenity and focus inherent to the Suzuki method of teaching. With a hierarchy of spaces ranging from small private lesson rooms to group classrooms, and a large performance hall seating up to 200, the building needed a central, underlying element tying it together. That space became a â&#x20AC;&#x153;dynamic courtyardâ&#x20AC;? that allowed spaces to flow and blend into it through the use of roll-up doors and the repetition of solids and voids.. The auditorium addresses the courtyard directly with a movable stage partition that allows the indoors to spill outside and for hybrid indoor-outdoor performances to occur. The space draws upon a range of wood framing members, from spanning trusses to heavy timber columns, to accommodate large open spaces and create a sense of solidity and enclosure.

The scheme wraps around the courtyard, with primary spaces (consisting of large classrooms and the auditorium) comprising three sides, while the private lesson rooms and services form the southern bar. The dashed lines in the hallway represent strips of skylight, which merge into solid concrete masses with built-in seating as they meet the walls and ground. This solid/void dichotomy is further enforced by the large roll-up doors inset between the masses around the perimeter of the courtyard. The elements all combine to create stimulating views, passive climate control, and an ever-changing circulation system for the building.

The auditorium of the music school serves as the crowning element of the building, grand in its stature and construction. Massive rough wood columns support glu-lam trusses on which rests the acoustically-canted roof of the space. Along the walls, an undulating series of wood panels over acoustic cloth creates an artistic and pragmatic treatment. Rows of simple pews comprise the seating, which can be moved when the functions of the space change. The large barn doors of the auditorium can be open or closed, allowing the outdoor courtyard to flow in and out of the space.

finnish academy for the arts

Sited in the heart of downtown Portland, the Finnish Academy is a place for artists and scholars of Finland to pursue their studies and practices immersed in a different culture. Fostering collaboration and cultural exchange between two nations, the Academy is part embassy and place of learning, drawing inspiration from the American Academy in Rome. The design for the Academy centers around an exploration of â&#x20AC;&#x153;slow circulationâ&#x20AC;? and its ability to foster spontaneous encounters and the exchange of ideas. A long slice of atrium bisects the building axially, housing a meandering system of ramps that provides the primary circulation for the building. These ramps form the heart of the building, creating an opportunity for conversation and exchange as the students traverse the layers of the building during the course of the day. From a systems standpoint, the atrium serves as a giant stack ventilation system, passively cooling the building, while southern light permeates the space year round, allowing the primary spaces that adjoin to enjoy both day-lighting and solar gain.

The fourth floor houses two important program eleele ments - the library and dining hall. Both spaces have been situated with a connection to the sole outdoor space in the building, a roof deck with views of the park blocks and a sense of privacy afforded by its elevation high above the street.

The materiality of the project speaks to the delicacy and refinerefine ment of modern Finnish architecture. The celebration and exploitation of light is a tradition stemming from Finlandâ&#x20AC;&#x2122;s harsh Nordic climate, and it is only fitting that the atrium, bathed in southern light, be a central facet of the building. An envelope of vertical light gauge steel clads the facade, emphasizing the geometry of the building and lending significance to the dining hall and outdoor roof terrace around which it â&#x20AC;&#x153;coilsâ&#x20AC;?. In section, the direct juxtaposition of program spaces with the vertical circulation and life-giving atrium is plainly revealed. The atrium and its ramps is literally the heart and the engine.

Shifts in both the global economy and the changing nature of building culture itself were at the root of this studio’s explorations. How can a building satisfy the needs of occupants now as easily as those of occupants 50 years in the future? Can architecture foster a place where living, working, and “third places” commingle and support life, while occupying a footprint that is sustainable and reproducible? These were the questions I entertained in the process of this studio - the result was a homegrown community where people of all walks could create an existence, while the spaces they occupy grow, shrink, and otherwise adapt to the needs of their home, work, and social lives.

A language of construction and building was arrived at in the process of design. Simple wood models spoke to the modularity of buildings, and allowed for rapid modification and exploration of space - in effect accelerating the process of time and revealing its impact on the building form.

Sketches and diagrams focused on key issues of flexibility and adaptability, while trying to reach and understanding of how buildings and streetscapes evolved over time. Building layouts and program juxtapositions focused on simplicity and ease of use, trying to foster as many connections as possible.

A section through the heart of the live-work component of the project shows simple stacked living modules juxtaposed with large shared production spaces, fostering the opportunity for a variety of direct connections or spatial transparencies. The flexibility of the spaces allows for occupants to define the degree of intermingling they desire between their work and home life. Manipulations to the simple layouts of living and working units can allow for a broad spectrum of live-work hybrids.

The heart of the project is a carefully landscaped interior corridor, which ties the live-work core to the social hubs at the north and south ends of the site. A small public plaza engages the corner of Mississippi and Fremont streets, creating a venue for the public to mingle and enjoy the bar and cafe on the site.

While interning during the summer of 2012 at WORKSBUREAU, formerly Will Bruder + partners, I had the opportunity to work on the King Abdullah Financial District Spas project. This large “attractor building” for the multi-billion dollar development in Riyadh, Saudi Arabia, will feature an innovative perforated titanium skin, and open and expansive interior spaces featuring breathtaking living walls. In my 11 weeks on the project, I spent a good deal of time with the project architect and interiors team designing and drafting casework details for the Men’s and Women’s spa pool areas. The rendering at right depicts the space that I worked on, drafting detail drawings and interior elevations. The attendant desk in the rendering was one of the areas I designed. Masters of Architecture Portfolio 2010-2012. Work done at the University of Oregon Eugene and Portland campuses.

Masters of Architecture Portfolio 2010-2012. Work done at the University of Oregon Eugene and Portland campuses.