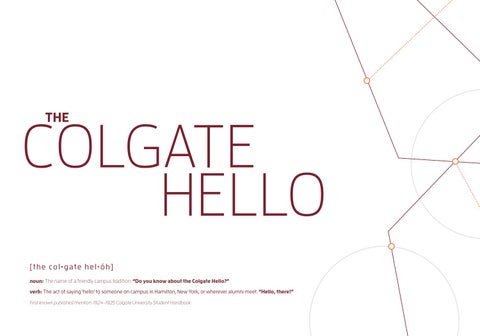 COLGATE HELLO [t he co l • g a te hel • ó h ] noun: The name of a friendly campus tradition. “Do you know about the Colgate Hello?” verb: The act of saying 'hello' to someone on campus in Hamilton, New York, or wherever alumni meet. “Hello, there!” First known published mention: 1924-1925 Colgate University Student Handbook

“I have made some of my best friends here simply by saying hello to someone new.” COLBY KINGSTON ’18 Kennebunkport, Maine

“I joined Outdoor Education because I got great vibes from the people and it, put simply, has made my Colgate experience.”

Fraternities and sororities at Colgate date back to 1856. About one-third of Colgate students are involved in Greek letter organizations.

INTERFAITH COMMUNITY Annie Hoefler ’15 and Ben are both members of Interfaith Community, one of eight religious groups on campus. KAPPA KAPPA GAMMA

Sisters of the Round Table

SHARLENE DISLA Annie, of Anchorage, Alaska, is a member of Colgate’s Pep Band.

Performed in the Vagina Monologues

“On the quad, people are taking their time going places and saying `Hi’ to everyone they run into. It’s like a scene out of one of those college pamphlets.” — SHARLENE The Academic Quad

This place is home

SISTERS OF THE ROUND TABLE

Sharlene met Grace Western ’17 at a meeting of this organization dedicated to raising awareness of issues related to women and women of color.

“Whether it’s professors, peers, or staff, I have the most incredible conversations and learn so much, not just about academia, but also about humanity.”

GRACE Sisters of the Round Table Association of Critical Collegians

Assistant director of the Vagina Monologues

Danielle Iwata ’15 and Grace have both been part of the Dancefest tradition. Anyone not involved in one of the two dozen dance groups is probably there cheering on their friends. COMMUNITY LEADER

“I’ve learned so many things that have helped me grow as a person. I didn’t expect to learn this much about the world, and myself.”

1” short page for center fold out

“I’ve learned so many things that have helped me grow as a person. I didn’t expect to learn this much about the world, and myself.”

As leader of the Colgate African Student Union, MariaDorin organized an African fashion show with designers from New York City.

“My friends and I created ‘Diner Sunday,’ where we would seek out a different local diner every week to try out.”

Ryan Clements ’16 and Marvin took advantage of the guidance provided by the alumni mentors who return to campus each month to help students develop their own business ventures.

“Last summer, I went on a six-week geology trip to Colorado, Utah, and Wyoming. It was awesome.”

Natalie Sportelli ’15 and Ryan are

part of this select 26-member

MAJOR: English with an emphasis in creative writing

hallmarks are outstanding leadership, dedicated service to the community, and the preservation of tradition.

“My internships with CNBC and Forbes, powered by alumni connections, have prepared me to enter the real world.”

WOMEN IN BUSINESS From the floor of the New York Stock Exchange to the offices of Google and Morgan Stanley, Women in Business members connect with

Colgate’s radio station 90.1 FM was founded in 1951. Students are DJs, producers, and also help out with publicity, news, and the technical side of broadcast radio.

TAYLOR WASHING Caroline Brawner ’15, of Edmonds, Washington, is a midfielder on Colgate’s Division I Women’s Soccer team. She was named a 2014 First-Team Senior All-American.

“The thing that surprised me the most was how easily and quickly I created a family here… I was able to find a group of people I love and will always love.”

“I did not expect to fall in love with central New York as much as I have. I love the changing of seasons, and will miss being in such a stunning place after I graduate.” ELOISE LAHORGUE ’15 Kentfield, California 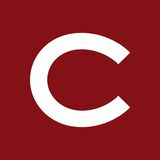