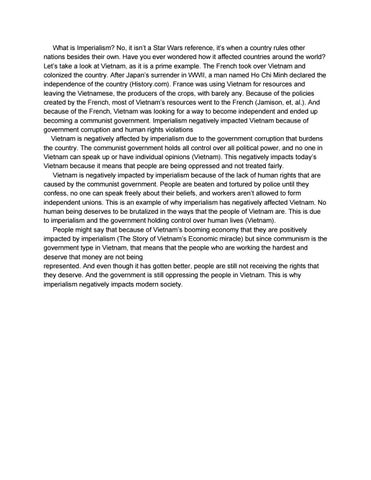 What is Imperialism? No, it isn’t a Star Wars reference, it’s when a country rules other nations besides their own. Have you ever wondered how it affected countries around the world? Let’s take a look at Vietnam, as it is a prime example. The French took over Vietnam and colonized the country. After Japan’s surrender in WWII, a man named Ho Chi Minh declared the independence of the country (History.com). France was using Vietnam for resources and leaving the Vietnamese, the producers of the crops, with barely any. Because of the policies created by the French, most of Vietnam’s resources went to the French (Jamison, et, al.). And because of the French, Vietnam was looking for a way to become independent and ended up becoming a communist government. Imperialism negatively impacted Vietnam because of government corruption and human rights violations Vietnam is negatively affected by imperialism due to the government corruption that burdens the country. The communist government holds all control over all political power, and no one in Vietnam can speak up or have individual opinions (Vietnam). This negatively impacts today’s Vietnam because it means that people are being oppressed and not treated fairly. Vietnam is negatively impacted by imperialism because of the lack of human rights that are caused by the communist government. People are beaten and tortured by police until they confess, no one can speak freely about their beliefs, and workers aren’t allowed to form independent unions. This is an example of why imperialism has negatively affected Vietnam. No human being deserves to be brutalized in the ways that the people of Vietnam are. This is due to imperialism and the government holding control over human lives (Vietnam). People might say that because of Vietnam’s booming economy that they are positively impacted by imperialism (The Story of Vietnam’s Economic miracle) but since communism is the government type in Vietnam, that means that the people who are working the hardest and deserve that money are not being represented. And even though it has gotten better, people are still not receiving the rights that they deserve. And the government is still oppressing the people in Vietnam. This is why imperialism negatively impacts modern society. 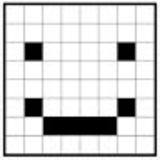