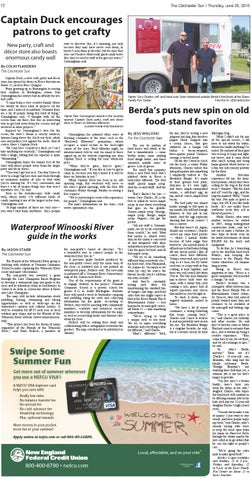 start to discover this, it’s amazing, not only because they may have never seen them, or haven’t seen them in decades, but because they also can’t believe what really good candy tastes like; they’re used to stuff in the grocery stores,” Cunningham said.

By COLIN FLANDERS The Colchester Sun Captain Duck, a new craft, party and décor store, has opened its doors in Essex Junction on Route 15, next to Price Chopper. From growing up in Bennington to raising four children in Burlington, owner Dan Cunningham has always had an affinity for arts and crafts. “I came from a very creative family where we would do these kind of projects all the time, and I noticed in northern Vermont there are a lot of people doing this kind of thing,” Cunningham said. “I thought with all the screen time out there, this was an interesting way to get kids away from the screens and get involved in other projects.” Inspired by Cunningham’s love for the ocean, the store’s theme is strictly nautical; lanterns hang above the check-out desk, while oars and pulleys rest against the walls. And of course, there’s Captain Duck. “He’s my boss. I report to a duck, so I can’t take anything too seriously,” Cunningham said with a laugh, adding that his superior is quite “demanding.” Cunningham hopes the homey feel of the store will attract people away from the larger party and décor stores. “You won’t get lost in it. You don’t have to drive to a huge big-box store and wade through an enormous number of isles to find what you’re looking for. It’s very convenient, and there’s a lot of unique things here that aren’t anywhere else,” he said. Such as the kaleidoscopic bulk candy wall, which holds 176 different kinds of candy, making it one of the largest in the state, Cunningham said. “A huge number of these are very rare— you won’t find them anywhere. Once people

Cunningham has planned other ways of drawing customers to the store, such as the “Backwall Blowouts” promotion, which occupies a small section in the back-right corner of the store. Each Monday night, an announcement will be sent via email to those signed up on the website regarding one item Captain Duck is selling for near wholesale price. “When they’re gone, they’re gone,” Cunningham said. “ If you like it, you’ve got to come in, because you don’t know if it will be there on Saturday or not.” While Captain Duck has been in its soft opening stage, this weekend will serve as the store’s grand opening, with the first 300 customers Friday through Sunday receiving a free surprise. “We’re just trying to create a fun experience for people,” Cunningham said. For more information on the store, visit www.captainduck.com.

the non-profit’s board of directors. “It’s a wonderful way to connect people to the watershed they live in.” A previous guide booklet produced by the non-profit covers only the main stem of the river, is outdated and is not printed on waterproof paper, Pollock said. The new map is patterned off a Vermont River Conservancy map of the Connecticut River. One of the requirements of the grant is to engage students in the project. Vermont Commons School is a private school for grades 6-12 in South Burlington. Students there will spend a week in September camping and paddling along the river and collecting information for the guide. According to Pollock, they will be meeting with community members, scientists and historical society members to develop information for the map, as well as researching books and Internet sites about the river. Pollock will be editing their work and collaborating with a cartographer to finalize the product. The map scheduled to be published in January.

Berda’s puts new spin on old food-stand favorites By JESS WISLOSKI For the Colchester Sun The eau de parfum of food trucks and stands at the fair is unmistakable — some brothy onion, some sizzling fried dough batter, and those saturated, middle notes of grease. Lots of grease. The smell that emanates from a new food truck that’s plunked down in Essex is noticeably different. The first whiff: purely maple syrup. And the second whiff. And the third. That’s Berda’s for you — owner Cory Charles, 38, is the first to admit he tosses maple syrup in just about everything that goes on the griddle. Onions, maple syrup. Sausage, maple syrup. Burger, maple syrup. Peppers, you get the picture. “All our stuff is Vermontmade, we try to do everything from scratch,” he said. What that means is, almost every item on the menu is conceived of and integrated with ideas and products purchased locally. Like the grass-fed beef, and all that maple syrup. “We try to do something different than everybody else,” his head chef, Sean Hammond, 40, chimes in. “As much as we want [or can] we source the flavors locally, but it’s all from our own creation.” And they’re constantly testing new ideas for transforming the standard fare of burgers, hot dogs, and fried sides that one might expect to find at the Essex Family Fun &amp; Entertainment Center — best known for its mini-golf course, off Route 15 — into something extraordinary. “We’re trying to build a unique style to our food. We try to make everything authentic and everything a little bit different,” said Charles. What’s different? Well,

for one, they’re testing a new jalapeno hot dog, that involves pepper finely chopped into a cream cheese, that gets slathered on a hoagie roll before a bacon-wrapped, three-quarter pound Viennese sausage is tucked inside. On the day I went to check out the truck, a sunny Friday afternoon, Charles talked this intrepid reporter into something I admittedly balked at: The Breakfast Burger. It’s made of their ground beef patty, delicious in it’s own right, and those maple-caramelized onions, a soft-fried egg on top, and of course, maple-fried bacon. The beef patty was almost tender enough to fall apart in my mouth, but still had enough firmness to stay put in my hands. And the egg explosion dousing that bacon crunch? I was a convert. But that wasn’t all. Again, despite my resistance, Charles served me some fried pickles — which I mainly dislike because of how soggy they tend to be. (As a pickle purist, it offends me to find batter falling off any lovely pickle.) But, of course, these were different. Using a sweet-and-spicy pickle chip as it’s base, the fry batter used was so crispy with its thin coating, it kept together, and there was still crunch left when I bit in. The two-inch-diameter mac-n-cheese balls were the same, with a dainty thin crust coating a rich, gooey ball of superb macaroni and cheese that melted as you bit right in. To wash it down: canesugared lemonade, mixed in house. “We have a lot of repeat customers, a strong following that keeps coming back,” Charles said. I have to believe it, and am probably now on his list, too. The Breakfast Burger is a singular favorite, he said, but it’s rivaled closely by their

Swipe Some Summer Fun Get more out of summer whenever you use a NEFCU VISA®! A NEFCU VISA Explorer card helps you save with: • • • • • •

More money in your pocket, more fun in your summer! Apply online at nefcu.com or call 866-80-LOANS.

Michigan Dog. While I didn’t ask for any of the special secrets, I did have to ask about the batter, which was unlike anything I’ve tasted. He said part of their goal was to keep it crispy and light, not heavy, and it came about after much testing and using home-ground wheat berries as a fine but still crunchy powder for the flour. Another first-time experience for me: the deepfried peanuts, which they were selling by the bag at the food truck’s window. “Eat the shell and all” read the sign, and the bag was marked “BBQ.” I took the bait. Not quite as good as chips, but OK if you like hully foods. (It’s not unlike those sunflower seeds they sell in flavored packets.) While Charles, who owns another business he started in 2005, doing underground construction work, said he’s not out to make a fortune, he does hope to break even on his initial investment, of about $30,000 for the truck and equipment. To do that, he’s branching out to the ArtsRiot food truck Fridays, and keeping the business at the Family Fun Center otherwise, all summer long in town. Being in Essex was important to him. “Essex is a great community, but it needed a change,” he said. Berda’s location was a synergistic effort between him and the Essex Family Fun &amp; Entertainment Center owner, Al Senecal, who had noticed people wanted more than just creemees to be available at the mini-golf and batting cage center. “This is a great place to be,” said Charles, for visibility and other reasons. He said they’ve had the cooks at Sukho Thai had come to eat more than once, and it wound up being a creative experience. “They come here to eat, we eat there, and we all exchange recipes,” he said. So… who’s Berda, anyway? Turns out it’s Charles’s 14-year-old son, Brandon, who long had the family nickname Berda. Though Brandon’s not working there full-time yet, a summer job is one his dad’s happy to provide. “I’m like, here’s a broom buddy, here’s how you wash the dishes in the sink,” laughed Charles, who hopes the food truck will continue to be offering summer jobs to his kids well into his 12-year-old daughter Kaylee’s high school years. “I’m not out to make a ton of money. I just want to stay steady, and have people enjoy my food,” said Charles, who’s already toying with ways to keep the truck open from his home on Pinecrest Drive through the winter maybe for just called-in to-go orders that he can run right to people’s cars. “We’re going the extra mile to make good food.” Berda’s is open weekdays and Sundays, 12 to 8 p.m., Fridays and Saturdays, 12 to 9 p.m. at the Essex Family Fun Center on Route 15 in Essex Junction.