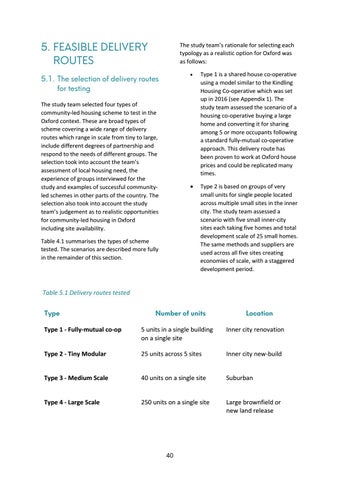 The study team’s rationale for selecting each typology as a realistic option for Oxford was as follows:

5.1. The selection of delivery routes for testing The study team selected four types of community-led housing scheme to test in the Oxford context. These are broad types of scheme covering a wide range of delivery routes which range in scale from tiny to large, include different degrees of partnership and respond to the needs of different groups. The selection took into account the team’s assessment of local housing need, the experience of groups interviewed for the study and examples of successful communityled schemes in other parts of the country. The selection also took into account the study team’s judgement as to realistic opportunities for community-led housing in Oxford including site availability. Table 4.1 summarises the types of scheme tested. The scenarios are described more fully in the remainder of this section.

Type 1 is a shared house co-operative using a model similar to the Kindling Housing Co-operative which was set up in 2016 (see Appendix 1). The study team assessed the scenario of a housing co-operative buying a large home and converting it for sharing among 5 or more occupants following a standard fully-mutual co-operative approach. This delivery route has been proven to work at Oxford house prices and could be replicated many times.

Type 2 is based on groups of very small units for single people located across multiple small sites in the inner city. The study team assessed a scenario with five small inner-city sites each taking five homes and total development scale of 25 small homes. The same methods and suppliers are used across all five sites creating economies of scale, with a staggered development period.

40 units on a single site

In March 2017, Oxford City Council received £54,000 from the Community Housing Fund to support the promotion and delivery of more community-led housing. Oxford City Council commissioned the Collaborative Housing Hub, which is a partnership between Community First Oxfordshire, Oxfordshire Community Foundation and Oxfordshire Community Land Trust, to undertake a research project to explore how community housing could be delivered sustainably within Oxford City. The methods used for this study included a combination of desk research, a needs assessment, interviews, outreach events and financial assessment. 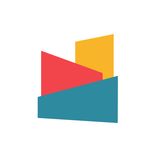 This is the Executive Summary for the research project to explore how community-led housing (CLH) could be delivered sustainably within Oxford City. The methods used for this study included a combination of desk research, a needs assessment, interviews, outreach events and financial assessment. Keywords: Cohousing Community Land Trust Co-operative