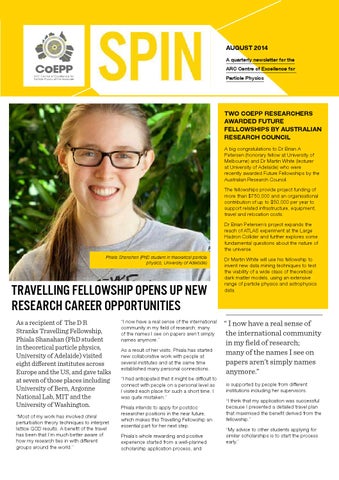 Two CoEPP researchers awarded Future Fellowships by Australian Research Council A big congratulations to Dr Brian A Petersen (honorary fellow at University of Melbourne) and Dr Martin White (lecturer at University of Adelaide) who were recently awarded Future Fellowships by the Australian Research Council. The fellowships provide project funding of more than $750,000 and an organisational contribution of up to $50,000 per year to support related infrastructure, equipment, travel and relocation costs. Dr Brian Petersen’s project expands the reach of ATLAS experiment at the Large Hadron Collider and further explores some fundamental questions about the nature of the universe. Phiala Shanahan (PhD student in theoretical particle physics, University of Adelaide)

Travelling Fellowship Opens Up New Research Career opportunities As a recipient of The D R Stranks Travelling Fellowship, Phiala Shanahan (PhD student in theoretical particle physics, University of Adelaide) visited eight different institutes across Europe and the US, and gave talks at seven of those places including University of Bern, Argonne National Lab, MIT and the University of Washington. “Most of my work has involved chiral perturbation theory techniques to interpret lattice QCD results. A benefit of the travel has been that I’m much better aware of how my research ties in with different groups around the world.”

“I now have a real sense of the international community in my field of research; many of the names I see on papers aren’t simply names anymore.” As a result of her visits, Phiala has started new collaborative work with people at several institutes and at the same time established many personal connections. “I had anticipated that it might be difficult to connect with people on a personal level as I visited each place for such a short time. I was quite mistaken.” Phiala intends to apply for postdoc researcher positions in the near future, which makes this Travelling Fellowship an essential part for her next step. Phiala’s whole rewarding and positive experience started from a well-planned scholarship application process, and

Dr Martin White will use his fellowship to invent new data mining techniques to test the viability of a wide class of theoretical dark matter models, using an extensive range of particle physics and astrophysics data.

“ I now have a real sense of the international community in my field of research; many of the names I see on papers aren’t simply names anymore.” is supported by people from different institutions including her supervisors. “I think that my application was successful because I presented a detailed travel plan that maximised the benefit derived from the fellowship.” “My advice to other students applying for similar scholarships is to start the process early.”

Staff profile with Dr Matteo Volpi on Stawell Gold Mine project Dr Matteo Volpi (postdoc researcher in experimental particle physics, University of Melbourne) has been involved in a new project with Stawell Gold Mine which is located in Western Victoria that could be used as a site in the hunt for dark matter. Having visited Stawell Gold Mine, what’s your overall impression? Stawell is a beautiful town and the gold mine has a long history. It was very exciting when I had the chance to go down to the mine. The staff who led us underground were professional and very helpful in providing us with information on the facilities down there. What do you think is the most special part about this project? There are dark matter detection sites in the northern hemisphere, but none have been built in the southern hemisphere. The idea is to do a modulation experiment in the southern hemisphere to confirm or refuse the DAMA/ LIBRA annual modulation which was based on the experiment in the northern

hemisphere. It could also be part of a new project by INFN (The National Institute for Nuclear Physics, Italy) to check the annual modulation, with the other site in Gran Sasso, Italy. What have you done for this project so far? At the moment we are making preliminarily background measurements to check the suitability of the site and where we could install the detectors. Radon monitors have already been installed to do some measuring. We have also collected rock samples that we will analyse in collaboration with ANSTO (Australian Nuclear Science and Technology Organisation). Currently the measurements have reached 880 metres below the ground, and have the potential to go deeper, as the mine site has a maximum depth of 1600 metres.

Coepp work experience week 2014 Students don’t really get into the nitty-gritty of particle physics until towards the end of their undergraduate degree, but that doesn’t preclude people of any age from learning about the concepts and theories that particle physicists work with every day. With this in mind, CoEPP’s Adelaide and Melbourne nodes held work-experience weeks during June for interested year10 students. These 15-year-olds were immersed into week-long programs of lectures, tutorials and given research projects. Adelaide students Ross and Belinda were

tasked with developing a good way of communicating their chosen research topic of dark matter to their peers. Each project was remarkably unique in content and form. Ross produced a conference-style poster, Belinda constructed a website, and both participants blogged about their time at CoEPP. Their projects can be viewed at http://outreach.coepp.org.au

the morning and a tour to the Synchrotron in the afternoon. Congratulations goes to all participants for surviving the demanding schedules and workload. Who knows, we may have just met the next generation of particle-physics researchers.

In Melbourne, the week coincided with the CAASTRO and CXS work-experience programs. Students completed intensive lab sessions in Python computational physics, a feat in itself! They ended the week in style with research presentations in

Left: Will Belcher takes students on a tour of the data hall in Queensberry Street, Melbourne. Above: Students make their final presentations (Melbourne).

FROM THE DIRECTOR Welcome to our new-look newsletter Spin. As I write this, I’m attending the ICHEP2014 conference in Valencia, Spain – two years after the renowned ICHEP2012 conference in Melbourne where the Higgs boson discovery was first announced (actually – the discovery was of the ‘Higgs-like’ boson back then – we’ve since confirmed that yes we have discovered a Higgs boson, with a planned program over the coming decade or more to look for even small differences from the standard model expectation, as a possible indication of new physics). I say ‘we’ and indeed it has taken many thousands of physicists across the world a great many years to come to this point. This field of research is a truly collaborative

one that spans all cultures and time-zones. The experiments at the LHC at CERN are the most extreme in their embracing of physicists from all corners of the world into complex organistions. Yet success results from the uniting force, the common goal to better understand the fundamental particles and forces of our universe. Since our ICHEP conference in 2012, there have been many exciting developments in particle physics research and we’re gearing up for the LHC restart in 2015. It really is an era of discovery, and a perfect time for CoEPP to be in existence and to be facilitating Australia’s role in this exciting field. The 2015 startup will see the LHC operating at full energy, further enhancing our capability for discovery in the coming years. Stay tuned.

CoEPP Updates Dr Michael Schmidt (Melbourne) Michael transferred from Melbourne to the Sydney Node on 21 July to commence a Lecturer position in the Sydney Theory Group. Dr Tony Limosani (Sydney) Tony has taken up a 2-year position as Chair of the Technical Performance Group at CERN but remains with CoEPP as a Chief Investigator. Dr Daniele Zanzi (Melbourne) Daniele has joined the Experimental group. He will work on the search for a top pair in multi-leptonic final states. Dr Lawrence Lee (Adelaide) Lawrence joined the Experimental group at Adelaide in May. Dr Tirtha Sankar-Ray (Melbourne) Tirtha takes up a position with the Physics Department at the University of Calcutta in early August.

Mirror dark matter We know through its effects on the cosmos that dark matter exists, but we still are yet to directly observe it. Particle physicists and astrophysicists have been working for years to develop and refine models to help in the search for dark matter. A recent paper by Robert Foot reviews the developments in mirror dark matter theory. This theory outlines a way of accommodating dark matter through the existence of a hidden sector that would be an exact copy of the standard model, mirroring interactions in every way but within its own sector. For each standard model particle a ‘mirror’ particle would exist. Ordinary and mirror particles are assumed to interact with each other via gravity and kinetic mixing interaction between the photon and mirror photon.

Mirror dark matter requires only a single assumption – that nature respects spacetime parity symmetry. This symmetry is enough to imply the existence of massive stable cold dark matter particles, without any additional assumptions. Mirror dark matter theory could provide a viable candidate for dark matter. It could also explain the large-scale structure of the universe, and lead to understanding some of the positive signals from various direct detection experiments and observations of neutron stars. Identifying dark matter would unlock a whole new world of discovery in both particle and astrophysics. Links to Robert Foot’s recent papers: http://arxiv.org/pdf/1401.3965.pdf http://arxiv.org/pdf/1407.4213.pdf

THE HUNT FOR DARK MATTER

Prof Juan Collar (The University of Chicago) It has been almost eighty years since scientists realised that a majority of our universe consists of a type of matter that neither emits nor absorbs light. For this reason, we call it “dark matter”. Prof Juan Collar from the University of Chicago is a leader in dark matter research. In a series of free public talks in Adelaide, Melbourne, Sydney and Perth he will talk about the worldwide hunt for dark matter and how teams of researchers search for these particles. Using highly sophisticated detectors, most of these experiments take place deep underground, in mines or tunnels that provide a quiet environment able to reduce interference from known particles. He will discuss the challenges faced by dark matter hunters, and the progress made over the past few decades. Infused by a good dose of optimism, it can be claimed that the discovery of these new particles may be near. Juan’s visit to Australia is courtesy of the Australian Institute for High Energy Physics (AUSHEP).

This workshop is co-sponsored by the Australian Research Council and The Office of the Scientific Attaché, Embassy of Italy, Canberra. This is a follow-up from the first bilateral ITA-AUS workshop on particle physics held at CoEPP in July 2012 where, in a joint declaration, it was resolved, in the light of dark matter searches underway in the Gran Sasso laboratory in Italy, to pursue the potential for a southern hemisphere partner to these efforts in Australia. SYDNEY When: Tuesday, August 19 2014 6:00 PM to 7:00 PM

For information on registration and programe, please visit: http://www.coepp. org.au/coepp-caastro-workshop-2014

Why Spin? In quantum mechanics and particle physics, spin is an intrinsic form of angular momentum carried by elementary particles, composite particles (hadrons), and atomic nuclei. It is a solely quantum-mechanical phenomenon and does not have a counterpart in classical mechanics (despite the term being reminiscent of classical phenomena such as a planet spinning on its axis). Typically, values of spin for fundamental particles are ½ for fermions (electrons, neutrinos, quarks and leptons) or integer values for bosons (eg photons and gluons have a spin of 1). The recently discovered Higgs boson is the only fundamental particle with a spin of 0. We have named our new research newsletter after this property of fundamental particles to signify that the research within CoEPP is always seeking to go beyond our current limits of knowledge and to continue to explore the unknown.

Centre of Excellence for Particle Physics at the Terascale, quarterly newsletter. August 2014 edition. 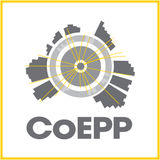