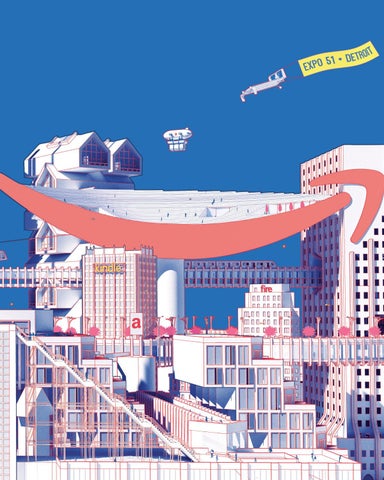 “We are continuously engaged in the attempt to organize our surroundings, to structure and identify them. Various environments are more or less amenable to such treatment. when reshaping cities it should be possible to give them form which facilitates these organizing efforts rather than frustrates them.” - Kevin Lynch • Elements of the City

The 2051 Global Exposition celebrates Detroit as a new criterion for urban life in the 21st Century. The expo is projected to exceed 150 million visitors, surpassing its predecessors and setting a new benchmark for global expositions. The international recognition Detroit is currently experiencing marks the closing chapter to a major transitional period in its lifetime. It is important to understand the forces that have molded the city‘s image since the turn of the century. This book provides a lens into the key proponents of Detroit’s evolution into greatness.

there are three main characters in this story. 8

prelude: a breif history of detroit

prelude: A Brief history of detroit

urban decay in detroit At the turn of the twentieth century, many considered Detroit to be the poster child of urban decay. Once an epicenter of industrial progress and advancement, then driven to a massive depopulation and declining quality of life. Over 30,000 residential properties had been vacated as a result of Detroitâ&amp;#x20AC;&amp;#x2122;s urban renewal and alienation of its residents. Larger manufacturing plants such as the Packard Motor Plant and cultural beacons like the Michigan Theatre now stand as weathered aftermaths of a once thriving cityscape. What drove Detroit to this level of desolation and blight?

world of tomorrow In 1938, visionary collaborative Norman Bel Geddes and Albert Kahn conceived of “Futurama,” an exhibit at the World’s Fair that imagined an urban fabric surrounding the automobile; a super highway system permeating cities, providing arteries of mass vehicular transit between major cities. This was a model of the near future, a model inspiring reconceptualization of urban life. In 1956, The Federal Highway Act fulfilled this vision of the “world of tomorrow,” beginning an infrastructural implementation that cut right through neighborhoods in Detroit. This fragmentation is one of the key contributors to Detroit’s decline over the next half century.

“Throughout the city’s decline we haven’t had a market to absorb what would be what parking lots are. There’s not enough economic return to put a building on them...As we go forward, I think rationalizing how we store automobiles is something we’re going to have to contend with particularly as we start to see growth both in downtown and midtown.” - Edward Lynch • Detroit Future City Planner (2018)

In the wake of the city’s desolation and blight in the later half of the twentieth century, members of the community began to embark on small creative endeavors to revitalize and rebuild neighborhoods. In 2014, Detroit Future City (DFC), an independent nonprofit think tank, was formed to create accessible strategies that citizens could deploy themselves to strengthen the city. DFC sought to expand their reach through large scale speculative explorations. Enter UrbEnact, a small group of designers and urban planners that partnered with DFC in 2017 to imagine radical futures of urban development through the community. The research proposed fusions of public space with systems of mobility and built entities. The work garnered positive reception from the community, sparking a movement to bring some of these ideas to life.

quote pulled from an exclusive interview with edward lynch. 15

Detroit future city Rather than managing or policing redevelopment, DFC offered Detroiters thorough sets of instructions for them to enact change themselves. UrbEnact hoped their work could inspire conversations in the community about urbanism. 16

Imbalanced mobility According the American Community Survey, an overwhelming amount of commuters chose automotive transit as their means of getting to work between the years 2011 and 2015. 18

balanced mobility UrbEnact sought to imagine an urbanity that offered a more balanced means of transportation, one that incentivizes and rewards public and pedestrian movement. 19

fragmentation UrbEnact identified one of main issues plaguing Detroit is fragmented areas of performance. Highways slice through the urban fabric, dividing the city into distinct areas that only serve one purpose. 20

fragmentation An optimal urban condition is one that breaks down boundaries and supports a rich variety of performances.

3-Dimensional development Simple geometric operations, while effective, are limited as they are typically resolved solely in plan. A three-dimensional approach allows the city to achieve 22

urban index Elements of a city can be at odds with each other when carrying out isolated performances. A careful synthesis of these elements allows for place-making that services several types of urban dwellers simultaneously. 26

Typical arrangement The familiar arrangement of a given city places different elements adjacent to one other, with little to no interaction. These elements often end up competing to serve their function. 27

captive city â&amp;#x20AC;&amp;#x153;The City of the Captive Globeâ&amp;#x20AC;? forces inhabitants to navigate around the imposing masses of the grid. Additionally, the ground plane crashes multiple modes of transit together without completely satisfying any one. 28

liberated city This exploration strengthens interdependence and interrelation within the built environment, creating new opportunities for movement and access absent in â&amp;#x20AC;&amp;#x153;The City of the Captive Globe.â&amp;#x20AC;? 32

box plaza This proposal reconfigures the Plaza De Mayor in Madrid as a volumetric public gathering space. The volume offers a stronger interface with built forms and a wider breadth of spatial conditions. 36

interchange This proposal rejects the prescribed function of a freeway interchange in Detroit, and re-imagines it as an urban community with spaces dedicated to agriculture, public space, housing, and retail. 40

existing condition The buildings of Detroit tend to stand isolated from the activity around them. UrbEnact understood that the parti of their design mission needed to address this condition.

proposed condition UrbEnactâ&amp;#x20AC;&amp;#x2122;s proposal rejected the prescribed function of a freeway interchange in Detroit, and re-imagined it as an urban community with spaces dedicated to agriculture, public space, housing, and retail. 45

The overwhelmingly positive reception of UrbEnactâ&amp;#x20AC;&amp;#x2122;s proposal made them eager to pursue this fantasy and turn it into a reality for Detroit. However, they knew a future this radical begged a set of resources beyond what the community could provide...

“My hypothesis about supply chains is that they need to become more distributed because we’re not all going to stores anymore. We are getting stuff delivered in a much more distributed way. I think the design of those things is happening and needs to be happening.” - Jennifer Pazour • Industrial + Systems Engineer, Lecturer RPI

In 2017, global tech industry titan, Amazon, announced its aspiration to erect a second headquarters in the United States. The headquarters was estimated to bring over 50,000 jobs and billions of dollars in capital investment. UrbEnact saw this as the potential catalyst for their radical urbanism. They encouraged DFC and local government officials to back a proposal that would help Detroit stand out amongst hundreds of competing cities. In 2018, UrbEnact partners went to Amazon’s primary headquarters in Seattle with an offer to relinquish authoritative control over Detroit’s policies, activities, and redevelopment operations in exchange for their new headquarters and capital investment. Amazon executives took the offer and immediately began rebuilding Detroit as a hyper-designed corporate campus that followed the principles of DFC and UrbEnact’s studies. Over the next few decades, Amazon orchestrated a redevelopment scheme that rejects automotive transit and isolated programming in favor of public space, urban agriculture, and mixed-performance buildings. The city soon became home to Amazon’s subsidiary companies and technological experiments.

quote pulled from an exclusive interview with jennifer pazour. 49

amazon technologies Amazon quickly devised a plan to integrate their extensive research and cutting-edge technology within an urban context. How could their products make the citydwelling experience more lively and convenient? 50

secure drone Package delivery drone equipped with surveillance and defense systems that can be accessed by local law enforcement.

charging + pickup unit Streetlight integrated with charging station for drones and drop off chutes for package delivery. City-dwellers can access particular unit for package pickup based on their location. 56

checkpoint turnstiles Threshold areas implemented to gather data for foot-traffic around the city. Allows the city to condition advertisements and information to individuals based on their patterns of movement. 57

amazon HQ Workplace for executives, division leaders, and main staff. Serves as a public park, performance space, a stop in the gondola transit line and, a stop the people mover transit line. Designed by UrbEnact. 61

amazon Air center Amazon division dedicated to advancing air systems for delivery and transit. Located in the re-imagined Coleman A. Young Municipal Center. The center serves as a stop for the Prime Air Bus. 66

audible hq Subsidiary company executive workplace and retail center located in the re-imagined One Woodward Building. The headquarters serves as a stop for the gondola transit line and a stop for the Prime Air Bus. 70

imbd hq Subsidiary company executive workplace located in the re-imagined One Woodward Building. The headquarters serves as a stop for the gondola transit line and a connecting point for the pedestrian mall. 72

Amazon retail stores Goods and services provided by Amazon are made physically available to the consumer along the outdoor pedestrian park.

In the midst of the cityâ&amp;#x20AC;&amp;#x2122;s booming growth, Amazon recognized that their long term success in Detroit was dependent on an enthusiasm for the world outside of itself. They imagined an event that would encourage tourism and activity throughout their urban campus...

We use architecture to tell a powerful story of when we appear to stop caring about the way we are perceived as a nation. We think all America puts out there (the products, media, television shows and movies) represents our wide diversity and values. But in fact, we’ve ended up projecting an image which is more narrow and materialistic. It’s a very fact-based criticism of what we’ve been putting out at the World’s Fair; and why the world thinks what we care about is our relationships to them through trade only. - Mina M. Chow • AIA, Adjunct Associate Professor USC School of Architecture, Director of “FACE OF A NATION:

For several decades, the United States has had little involvement in international cultural events as the World’s Fair. Amazon sought to rekindle the ambition and spirit the nation used to have for the fair. The multitude of moving parts Amazon’s redevelopment scheme were directed towards an end goal of an international exposition held on the 200th anniversary of the first ever World’s Fair. By hosting a World’s Fair in Detroit, they could rally the country behind city, give the city a global presence, and attract millions of visitors from around the world. Amazon welcomed celebrated personalities in the architecture discipline to represent different countries with iconic built works that contributed to the public realm. The city became a collection of some of the most daring pavilions in the history of the World’s Fair, most of which paid homage to previous architectural feats of the fair.

quote pulled from an exclusive interview with mina chow. 89

International pavilions Amazon aimed to recapture the national pride and excitement the United States once had for the Worldâ&amp;#x20AC;&amp;#x2122;s Fair through spectacular works of architecture, ones that reject what pavilions like the US Pavilion at the 2010 Shanghai Expo stood for. 90

The success of Expo 51 speaks to the significance of Amazonâ&amp;#x20AC;&amp;#x2122;s redevelopment project, a project that merges hyper-productivity with spectacle and attraction to create a profound experience for city dwellers...

The project presentation included a set of canvas prints, a series of printed books, a physical model, and a slide presentation. The presentation was stylized as a mock TEDTalk, spoken behind a lectern and in past tense as though the events had already taken place.

Canvas PRints One isometric drawing printed over three 30” by 40” canvas sheets with a 1.5” wrap. Prints made with Easy Canvas Printing in Texas. Prints mounted with assistance from Tom Roland.

All images in this project are originally produced or creatively transformed. 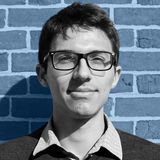