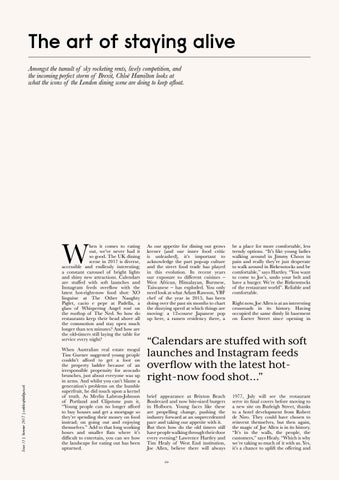 The art of staying alive Amongst the tumult of sky rocketing rents, lively competition, and the incoming perfect storm of Brexit, Chloë Hamilton looks at what the icons of the London dining scene are doing to keep afloat.

hen it comes to eating out, we’ve never had it so good. The UK dining scene in 2017 is diverse, accessible and endlessly interesting; a constant carousel of bright lights and shiny new attractions. Calendars are stuffed with soft launches and Instagram feeds overflow with the latest hot-right-now food shot: XO linguine at The Other Naughty Piglet, cacio e pepe at Padella, a glass of Whispering Angel rosé on the rooftop of The Ned. So how do restaurants keep their head above all the commotion and stay open much longer than ten minutes? And how are the old-timers still laying the table for service every night? When Australian real estate mogul Tim Gurner suggested young people couldn’t afford to get a foot on the property ladder because of an irresponsible propensity for avocado brunches, just about everyone was up in arms. And whilst you can’t blame a generation’s problems on the humble superfruit, he did touch upon a kernel of truth. As Merlin Labron-Johnson of Portland and Clipstone puts it, “Young people can no longer afford to buy houses and get a mortgage so they’re spending their money on food instead; on going out and enjoying themselves.” Add to that long working hours and smaller flats where it’s difficult to entertain, you can see how the landscape for eating out has been upturned.

As our appetite for dining out grows keener (and our inner food critic is unleashed), it’s important to acknowledge the part pop-up culture and the street food trade has played in this evolution. In recent years our exposure to different cuisines – West African, Himalayan, Burmese, Taiwanese – has exploded. You only need look at what Adam Rawson, YBF chef of the year in 2015, has been doing over the past six months to chart the dizzying speed at which things are moving: a 12-course Japanese pop up here, a ramen residency there, a

be a place for more comfortable, less trendy options. “It’s like young ladies walking around in Jimmy Choos in pain and really they’re just desperate to walk around in Birkenstocks and be comfortable,” says Hartley. “You want to come to Joe’s, undo your belt and have a burger. We’re the Birkenstocks of the restaurant world”. Reliable and comfortable. Right now, Joe Allen is at an interesting crossroads in its history. Having occupied the same dimly lit basement on Exeter Street since opening in

“Calendars are stuffed with soft launches and Instagram feeds overflow with the latest hotright-now food shot...” brief appearance at Brixton Beach Boulevard and now bite-sized burgers in Holborn. Young faces like these are propelling change, pushing the industry forward at an unprecedented pace and taking our appetite with it. But then how do the old timers still have people walking through their door every evening? Lawrence Hartley and Tim Healy of West End institution, Joe Allen, believe there will always -34-

1977, July will see the restaurant serve its final covers before moving to a new site on Burleigh Street, thanks to a hotel development from Robert de Niro. They could have chosen to reinvent themselves, but then again, the magic of Joe Allen is in its history. “It’s in the walls, the people, the customers,” says Healy. “Which is why we’re taking so much of it with us. Yes, it’s a chance to uplift the offering and

Welcome to issue 11 of the Quarterly where Chloë Hamilton interviews Tommi Tómasson of Tommi’s Burger Joint, as well as looking at how restaurants are surviving amongst the constant swell of new openings. Our good friend Zeren Wilson makes his feelings very clear about the new wave of tonic waters, and Callum Edge returns to give us his view on the phenomenon that is brunch. Adam Hyman puts on his hard hat to take a tour around the new Annabel’s and James Wood sits down with Dan Doherty to discuss branding for Duck & Waffle Local. 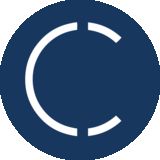