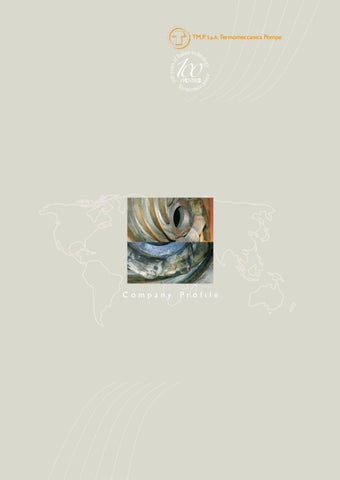 Termomeccanica was established in I9I2 in La Spezia as “Cerpelli &amp; C.” and later became a stock company in the I930s, taking the name of “Termomeccanica Italiana S.p.A.”. In January I995, further to the dissolution of EFIM, the state-owned group it belonged to, the activities and shares of Termomeccanica Italiana S.p.A. were transferred to privately-owned and -managed Termomeccanica S.p.A. with the aim to continue the company’s strong heritage in the manufacturing and turnkey plants sectors. Today, Termomeccanica is an Italian industrial Group which is amongst the main players of both the Environmental and Mechanical sectors. The Group, domestic leader in the manufacturing of large industrial pumps and in environmental turn-key plant projects, designs, develops and manages cutting edge technological solutions. 2

TM.P. The unavoidable Pump &amp; Service partner for your plants TM.P. S.p.A. - Termomeccanica Pompe, a pump designer by tradition whose history dates back as far as 1912, ranks today amongst the leading manufacturers and service providers of engineered centrifugal pumps solutions. Our fields of applications range from Desalination, Power Generation, Water Handling to Oil&amp;Gas and Heavy Industry. The entire company revolves around developing and providing solutions tailored to our Customers (EPC Contractors) &amp; End Users projects requirements, whether they be related to products or aftersales services. During the course of its long history, the Company has achieved a key position in the various reference markets it operates in and, today, TM.P.â&amp;#x20AC;&amp;#x2122;s pumps are running in major plants all over the world at full end-userâ&amp;#x20AC;&amp;#x2122;s satisfaction, as numerous certificates can prove.

Key Facts &amp; Figures A century of expertise. Over 95.000 rotating machines manufactured and supplied. Hundreds of plants equipped &amp; serviced in over 50 countries.

Research &amp; Development For more than a decade, TM.P. has been making important investments in technological &amp; quality improvement of both products and manufacturing facilities. Furthermore, dedicated Research programs on new hydraulics and materials structural analysis have been carried out by Termomeccanicaâ&amp;#x20AC;&amp;#x2122;s R&amp;D Department in cooperation with major Italian Universities.

TM.P.’s Test Centre is a unique structure allowing the testing, in real conditions, of all the pumps manufactured. The testing facilities cover a total area of 4,000 m2 and allow to perform:

• Full scale performance tests on 100% of the pumps manufactured; • Contractual model tests; • Validation of new hydraulics for product development The Test Centre is equipped with 7 test loops which main features are: • Maximum test capacity: 65000 m3/h • Maximum test power for horizontal pumps: up to 11MW at 50Hz and 4,5MW at 60Hz • Closed circuit test installation for high pressure and high temperature up to 200°C • Oil&amp;Gas pumps: closed circuit test installation for high temperature up to 350°C Each test session is conducted from the control room which is equipped with a remote control system using digital transducers and converters that allow to transfer and collect data from the test beds.

Key TM.P. Facts &amp; Figures in Water Transmission over the last 30 years The history of Termomeccanica is closely linked to the handling and transmission of medium and large masses of water. Today, thousands of TM.P. pumps are operating all over the world in hundreds of Irrigation, Land Reclamation, Potable Water and Water Treatment plants.

• The total installed power of medium- and large-sized pumps supplied amounts to 580 MW (from 100 kW to 10,000 kW) • Total number of pumps supplied: 2,800 • The pumps of the World’s largest pumping station are Termomeccanica’s

Having dedicated itself to product innovation and technological improvement, Termomeccanica pumps are, both from a design and a construction point of view, of unparallel performance, guaranteeing full customer satisfaction.

Termomeccanica Pompe has been designing and supplying engineered pumps for the Power Generation market since the 1950s, quickly establishing itself as a referenced leading manufacturer in Italy. The experience acquired worldwide and the necessity to compete in a more and more demanding market have led to constant product innovation and technological improvement.

As a result, Termomeccanica Pompe has reached today a well-established position in Power Generation, not only in its domestic market but also in Europe as well as the Middle East &amp; Gulf areas. Furthermore, the company’s presence in the Asian, African and American markets is constantly growing. Termomeccanica pumps cover all main and auxiliary services not only in Conventional but also in Geothermal and Nuclear power stations, namely:

Termomeccanica Pompe entered the Desalination market in the early 70’s, designing and manufacturing pumps for both Sea Water and Process services. Over the last 40 years, TMP has installed pumps in most of the key Desalination plants of the Middle-East &amp; Gulf areas, thus acquiring an unparalleled experience in this field. As a result, the Company ranks today amongst the world-leading manufacturers of Desalination pumps, offering products &amp; services up to the toughest technical requirements.

Termomeccanica pumps cover all process and water intake services related to the various Desalination technologies, such as MSF, MED and Reverse Osmosis.

Termomeccanica Pompe entered the Petrochemical and Oil&amp;Gas markets in the early 1960’s, markets which soon came to represent an important share of Termomeccanica Pompe’s business. Today, thanks to its century-old expertise and its constant investment in R&amp;D, Termomeccanica Pompe has renewed and enhanced its production program to supply a wide range of API 610 centrifugal pumps for the most demanding services, including oil pipelines, liquefied natural gas, on-shore and off-shore water injection. 20

Service Division Mission TM.P. Service Division’s mission is to offer a worldwide presence, guaranteeing a reliable, efficient, responsive and allencompassing assistance to its Customers &amp; End-Users, covering any need that may arise during their plants’ entire life cycle.

Considering the ever increasing internationalization of its supply chain and sales &amp; after-sales service activities, Termomeccanica Pompe has been developing a network of branches and majority-owned subsidiaries, establishing itself since the early 2000s in key geographical areas with high density of suppliers/installed products/job opportunities.

Following such localization policy, the Company has been able to better seize the opportunities offered by the local markets and to optimize its rapport with both Customers (EPC contractors) and End Users through improved closeness and responsiveness of services.

Such transfer gave way to the birth of a mechanical business “unit” allowing TM.P. and TM.C. to create synergies between their technical, commercial &amp; production structures and to reach the critical market size that will enable them to better compete in the global market.

TM.C. SS Limited Liability Company During the second half of 2009, TM.C. established TM.C.SS LLC (92% ownership) with offices and production facility based in Shanghai in order to better serve the Chinese market where Termomeccanica Compressori has had a significant presence since 2004. In fact, the constant evolution and internal growth of the Chinese market over the recent years has lead to strong competition on prices, due to both the development of local manufacturers and the transfer of production facilities to China by multinational competitors.

As a result, TM.C was driven to establish a local manufacturing company to help maintain its competitive edge on the local market thanks to the drastic cut of production costs. TM.C. SS is located in a modern warehouse, comprising a 1.000m2 of equipped production facilities plus office space, situated in the Baoshan industrial area which is less than one hour drive away from downtown Shanghai.

With a total investment of 7 million euro, TM.P. &amp; TM.C. created a centre of excellence for the manufacturing of highprecision mechanical parts. The company’s total industrial area is made of 4.500m2, 2.000m2 of which covered. Termomeccanica Service Sud workshop is equipped with machinery and tools which allow to execute any type of service activities as well as with a fully automated screw compressors production line.

S.C. TM.P. Termomeccanica Romania S.r.l. Termomeccanica Pompe entered the Romanian market in the 1980s as both a supplier of rotating machines &amp; systems equipment and a customer of local manufacturers supplying pump components. Over the years, Termomeccanica’s pumps have been installed inside the largest Romanian Power Generation plants (CNE Cernavoda nuclear plant, CE Rovinari, CE Isalnita and CE Craiova II conventional plants) as well as various Water Transmission plants. In 2005, based on the experience gained and the new strategic opportunities offered by the market, Termomeccanica Pompe decided to establish in Bucharest S.C. T.M.P Termomeccanica Romania S.r.l., a 100%-controlled company, with the aim to strengthen its commercial presence in the area as well as to provide support to both the head office’s Engineering and Procurement Departments.

With regards to Sales, Termomeccanica Romania has been designed to promote both new product and service activities on the market. More specifically, the company is able to provide a complete portfolio of services covering any need that may arise during the entire operating life a plants, offering reactive support and assistance to local customers. Since its establishment, Termomeccanica Romania’s business has significantly grown on all fronts, i.e. Sales, Engineering &amp; Procurement, and, it can be said that the controlled company has now come to represent a “flagship office” for TMP in its dealings with Eastern Europe clients and suppliers.

This new company was established with the aim of giving TM.P. a foothold in the Albanian market, which, with its wealth of pumping stations for monitoring river levels, offers great potential for the Service Division.

Termomeccanica Saudia Co. Ltd. Since 2002, the majority-owned controlled company, Termomeccanica Saudia Co. Ltd., has been offering a portfolio of services and activities to its customers related to the entire life cycle of their plants (Integrated Global Service) such as design, engineering, procurement, commissioning &amp; start-up, supervision, rehabilitation and replacement of all electromechanical components and industrial systems. Termomeccanica Saudia’s Customer portfolio include ROYAL COMMISSION, SABIC group, SEC, SWCC, SAFCO, SAUDI ARAMCO and MARAFIQ. October 2009 marked an expansion milestone for the Company as it added a new production facility in Al- Jubail to its existing Riyadh-based commercial office. The production unit is a modern facility of 4,200m2 strategically located in the core of Saudi Arabia’s Eastern Coast industrial area, at a stone’s throw from Bahrain and all the other Gulf countries.

Thanks to its Al-Jubail workshop, equipped with boring machines, cutting machines, milling machines, lathes as well as a last generation technology 30-ton crane, the company is able to develop internally any technical service and/ or engineering activity and thus, to answer any local customer need with high flexibility and quick response. The main workshop activities performed on pumps, compressors, rotating machines in general, valves and spare parts are: • machining work • balancing • overhauling and rehabilitation • reverse engineering and re-engineering. The Al-Jubail workshop has completed the existing structure in Riyadh (Sales) as well as those already present in Al-Jubail for the cost estimation and contracts development management, thus ensuring Termomeccanica Saudia and Termomeccanica Pompe are able to seize the great opportunities offered by the Saudi market for both new product and service activities.

The Branch Office has been created with the view to pave the way to the set up of a local service company with its own commercial, manufacturing and operative structures which will allow Termomeccanica Pompe to improve &amp; widen its Global Service offer to customers in the area. The opening of such local company is planned for the second semester of 2012.

The aim of the branch is to allow TM.P. to take better advantage of the strategic opportunities the Indian market presents, not only in terms of engineered centrifugal pumps and screw compressors sale related to new projects but also in terms of procurement considering the significant local supplier base to source materials/components from. The new branch will be operational by the second semester of 2012. 29