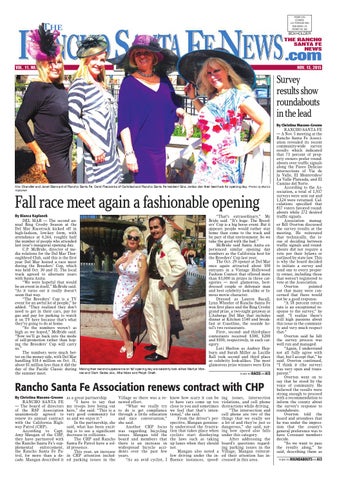 Survey results show roundabouts in the lead By Christina Macone-Greene

DEL MAR — The second annual Bing Crosby Season at the Del Mar Racetrack kicked off in high-fashion, low-key form, with attendance at 6,144, roughly half the number of people who attended last year’s inaugural opening day. C.P. McBride, director of media relations for the Del Mar Thoroughbred Club, said this is the first year Del Mar hosted a race meet during the Breeders’ Cup, which was held Oct. 30 and 31. The local track agreed to alternate years with Santa Anita. “We were hopeful that would be an event in itself,” McBride said. “As it turns out it really doesn’t seem that way. “The Breeders’ Cup is a TV event for an awful lot of people,” he added. “They realized they don’t need to get in their cars, pay for gas and pay for parking to watch it on TV here because that’s what they’re going to do at home. “So the numbers weren’t as high as we hoped,” McBride said. “Now we’ll go back into the mode of self-promotion rather than hoping the Breeders’ Cup will carry us.” The numbers were much better on the money side, with Del Mar handling $18.4 million on Oct. 31, about $1 million less than it did the day of the Pacific Classic during Making their second appearance on fall opening day are celebrity look-alikes Marilyn Monroe and Clark Gable, aka, Allie Moss and Ralph Chelli. the summer meet.

“That’s extraordinary,” Mc Bride said. “It’s huge. The Breeders’ Cup is a big horse event. But it appears people would rather stay home than come to the track and be part of that environment. So we take the good with the bad.” McBride said Santa Anita experienced similar opening day numbers as the California host for the Breeders’ Cup last year. The Oct. 29 opener at Del Mar once again attracted about 100 entrants in a Vintage Hollywood Fashion Contest that offered more than $3,000 in prizes in three categories — most glamorous, bestdressed couple or debonair man and best celebrity look-alike or famous movie character. Dressed as Lauren Bacall, Lynn Wheeler of Rancho Santa Fe won first place and the Bing Crosby grand prize, a two-night getaway at L’Auberge Del Mar that includes dinner at Kitchen 1540 and breakfast at Coastline, the seaside hotel’s two restaurants. First-, second- and third-place contestants received $300, $200 and $100, respectively, in each category. Lori Shelton as Audrey Hepburn and Sarah Miller as Lucille Ball took second and third place as celebrity look-alikes. The most glamorous prize winners were Erin TURN TO RACES ON A13

RANCHO SANTA FE — The board of directors of the RSF Association unanimously agreed to renew its annual contract with the California Highway Patrol (CHP). According to Capt. Amy Mangan of the CHP, they have partnered with the Rancho Santa Fe’s supplemental enforcement, the Rancho Santa Fe Patrol, for more than a decade. Mangan described it

as a great partnership. “I have to say that my troops love being out here,” she said. “This is a very good community for us and we enjoy it.” In the partnership, she said, what has been exciting is to see a significant decrease in collisions. The CHP and Rancho Santa Fe Patrol have a solid presence. This year, an increase in CHP attention included parking issues in the

Village so there was a renewed effort. “What we really try to do is get compliance through a little education and nice conversation,” she said. Another CHP focus was regarding bicycling issues. Mangan told the board and members that there is an increase in widespread bicycle accidents over the past few years. “As an avid cyclist, I

know how scary it can be to have cars come up too close to you and sometimes we feel that that’s intentional,” she said. From the driver’s perspective, Mangan genuinely understood the frustration that takes place when cyclists start disobeying the laws such as taking up lanes when they should not. Mangan also noted a few driving under the influence instances, speed-

ing issues, intersection violations, and cell phone distractions while driving. “The intersection and cell phone are two of the things that we really see a lot of and they’re just so dangerous,” she said, noting how speed also falls under this category. After addressing the board’s questions regarding parking issues in the Village, Mangan reiterated their attention has increased in this area.

RANCHO SANTA FE — A Nov. 5 meeting at the Rancho Santa Fe Association revealed its recent community-wide survey results which indicated that 73 percent of property owners prefer roundabouts over traffic signals along the Paseo Delicias intersections of Via de la Valle, El Montevideo/ La Valle Plateada, and El Camino del Norte. According to the Association, a total of 1,937 surveys were sent out and 1,124 were returned. Calculations specified that 817 voters favored roundabouts while 272 desired traffic signals. Association manager Bill Overton discussed the survey results at the meeting. He reiterated that technically, the issue of deciding between traffic signals and roundabouts did not require a vote per their bylaws or outlined by state law. This is why the board decided to initiate a survey and send one to every property owner, including those that weren’t registered to vote at the Association. Overton pointed out that many were concerned that there would not be a good response. “A 58 percent return rate is an exceptional response to the survey,” he said. “I realize there’s still high passions about this issue in the community and very much respect that.” Overton said he felt the survey process was well run and managed. “Again, I understand not all fully agree with that, but I accept that,” he said. Overton continued, “I think it (the survey) was very open and transparent.” Overton went on to say that he stood by the voice of community. He believed the results were strong enough to proceed with a recommendation to inform the county about the survey’s response to roundabouts. Overton told the board and attendees that he was under the impression that the county’s general preference was to have Covenant members decide. “So we want to pass the results along,” he said, describing them as TURN TO ROUNDABOUTS ON A13