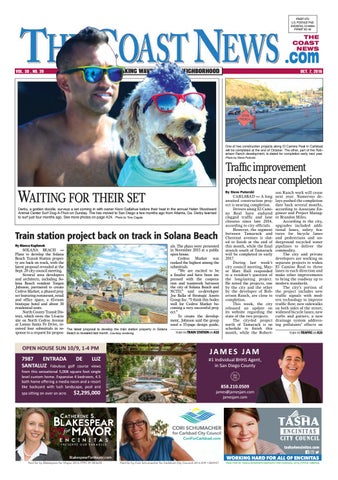 One of two construction projects along El Camino Real in Carlsbad will be completed at the end of October. The other, part of the Robertson Ranch development, is slated for completion early next year. Photo by Steve Puterski

Waiting for their set

CARLSBAD — A long awaited construction project is nearing completion. Drivers along El Camino Real have endured clogged traffic and lane closures since late 2014, according to city officials. However, the segment between Tamarack and Chestnut avenues is slated to finish at the end of this month, while the final stretch south of Tamarack will be completed in early 2017. During last week’s city council meeting, Mayor Matt Hall responded to a resident’s question of the long-lasting project. He noted the projects, one by the city and the other by the developer of Robertson Ranch, are close to completion. This week, the city released an update on its website regarding the state of the two projects. The city-led project north of Tamarack is on schedule to finish this month, while the Robert-

Derby, a golden doodle, surveys a set coming in with owner Kioni Gallahue before their heat in the annual Helen Woodward Animal Center Surf Dog-A-Thon on Sunday. The two moved to San Diego a few months ago from Atlanta, Ga. Derby learned to surf just four months ago. See more photos on page A24. Photo by Tony Cagala

from this sensational 5,008 square foot single level custom home. Expansive 4 bedroom, 4.5 bath home offering a media room and a resort like backyard with lush landscape, pool and spa sitting on over an acre.

als. The plans were presented in November 2015 at a public open house. Cedros Market was ranked the highest among the submittals. “We are excited to be a finalist and have been impressed with the cooperation and teamwork between the city of Solana Beach and NCTD,” said co-developer Joe Balla of Strategic Assets Group Inc. “I think this bodes well for Cedros Market becoming a very successful project.” To create the development, Johnson said the group used a 35-page design guide, TURN TO TRAIN STATION ON A25

son Ranch work will cease next year. Numerous delays pushed the completion date back several months, according to Associate Engineer and Project Manager Brandon Miles. According to the city, upgrades included additional lanes, safety features for bicycle lanes and pedestrians and underground recycled water pipelines to deliver the commodity. The city and private developers are working on separate projects to widen El Camino Real to three lanes in each direction and make other improvements to bring the roadway up to modern standards. The city’s portion of the project includes new traffic signals with modern technology to improve traffic flow; new sidewalks on both sides of the street; widened bicycle lanes; new curbs and gutters; a new drainage system addressing pollutants’ effects on TURN TO TRAFFIC ON A25