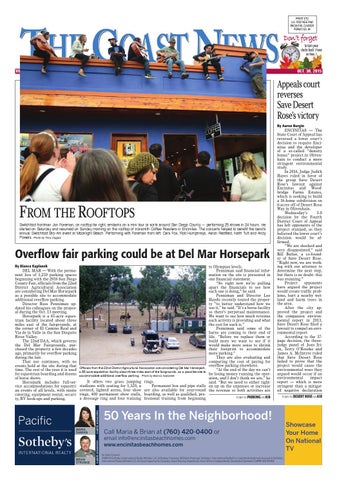 to turn your clocks back 1 hour on Nov. 1

to Olympian levels. Penniman said financial information on the site is presented in one financial statement. “So right now we’re pulling apart the financials to see how each one is doing,” he said. Penniman and Director Lee Haydu recently toured the property “to better understand how we use it,” he said. “It’s a horse facility so there’s perpetual maintenance. We want to see how much revenue each activity is providing and what the cost for each is.” Penniman said some of the barns are coming to their end of life. “Before we replace them or build more we want to see if it would make more sense to shrink their footprint to accommodate more parking.” They are also evaluating and comparing the cost of paying for overflow parking elsewhere. “At the end of the day we can’t be losing money running the operation, and I don’t think we are,” he said. “But we need to either tighten up on the expenses or increase the revenue so both activities are

ENCINITAS — The State Court of Appeal has reversed a lower court’s decision to require Encinitas and the developer of a so-called “density bonus” project in Olivenhain to conduct a more stringent environmental study. In 2014, Judge Judith Hayes ruled in favor of the group Save Desert Rose’s lawsuit against Encinitas and Woodbridge Farms Estates, which is seeking to build a 16-home subdivision on 6-acres off of Desert Rose Way in Olivenhain. Wednesday’s 3-0 decision by the Fourth District Court of Appeal has left opponents of the project stunned, as they believed the lower court’s decision would be affirmed. “We are shocked and very disappointed,” said Bill Butler, a co-founder of Save Desert Rose. “Right now, we are working with our attorney to determine the next step, but there is no doubt: this was stunning.” Project opponents have argued the project would create traffic problems, hurt a nearby wetland and harm trees in the area. After the city approved the project and the companion environmental report in 2013, Save Desert Rose filed a lawsuit to compel an environmental report. According to the 37page decision, the threejudge panel of Joan Irion, Terry O’Rourke and James A. McIntyre ruled that Save Desert Rose failed to prove that the project would cause the environmental woes they argued would occur if an environmental impact report — which is more stringent than a mitigated negative declaration

TURN TO PARKING ON A18

TURN TO DESERT ROSE ON A18

From the Rooftops Switchfoot frontman Jon Foreman, on rooftop far right, embarks on a mini tour or sorts around San Diego County — performing 25 shows in 24 hours. He started on Saturday and resumed on Sunday morning on the rooftop of Ironsmith Coffee Roasters in E ‪ ncinitas‬.‬ The concerts helped to benefit the band’s annual Switchfoot Bro-Am event at Moonlight Beach. Performing with Foreman from left: Cara Fox, Rob Humphreys, Aaron Redfield, Keith Tutt and Andy Powers. Photo by Tony Cagala

Officials from the 22nd District Agricultural Association are considering Del Mar Horsepark, a 65-acre equestrian facility about three miles east of the fairgrounds, as a possible site to accommodate additional overflow parking. Photo by Bianca Kaplanek

DEL MAR — With the permanent loss of 1,250 parking spaces beginning with the 2016 San Diego County Fair, officials from the 22nd District Agricultural Association are considering Del Mar Horsepark as a possible site to accommodate additional overflow parking. Director Russ Penniman updated his colleagues on the proposal during the Oct. 13 meeting. Horsepark is a 65-acre equestrian facility located about three miles east of the fairgrounds, at the corner of El Camino Real and Via de la Valle in the San Dieguito River Valley. The 22nd DAA, which governs the Del Mar Fairgrounds, purchased the property a few decades ago, primarily for overflow parking during the fair. That use continues, with no events held at the site during that time. The rest of the year it is used for equestrian boarding and dozens of horse shows. Horsepark includes full-service accommodations for equestrian events of all levels, with onsite catering, equipment rental, security, RV hook-ups and parking.

rings. Permanent box and pipe stalls are also available for year-round boarding, as well as qualified, professional training from beginning