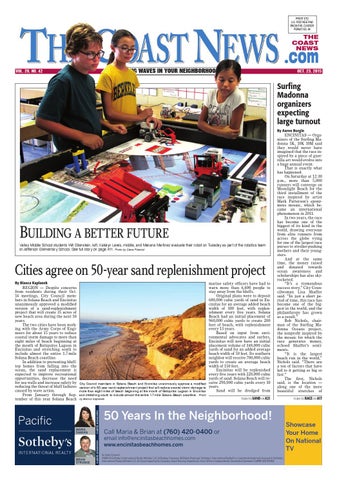 ENCINITAS — OrgaNEWS nizers of the Surfing Madonna 5K, 10K 10M said they would never have imagined that the race inspired by a piece of guerrilla art would evolve into a huge annual event. That is exactly what has happened. On Saturday at 12:30 p.m.,RANCHO more than 5,000 runners will converge on SFNEWS Moonlight Beach for the third installment of the race inspired by artist Mark Patterson’s eponymous mosaic, which became an international phenomenon in 2011. In two years, the race has become one of the biggest of its kind in the world, drawing everyone from elite runners from across the globe vying for one of the largest race purses to stroller-pushing mothers and their youngsters. And at the same time, the money raised and donated towards ocean awareness and scholarships has also skyrocketed. “It’s a tremendous success story,” City Councilwoman Lisa Shaffer said. “In just a short period of time, this race has become one of the biggest in the world, and the philanthropy has grown as a result.” Bob Nichols, chairman of the Surfing Madonna Oceans project, the nonprofit inspired by the mosaic for which the race generates money, echoed Shaffer’s sentiments. “It is the largest beach run in the world,” Nichols said. “There are a ton of factors that have led to it getting so big so fast.” The first, Nichols said, is the location — along one of the more beautiful stretches of

and stretching south to include almost the entire 1.7-mile Solana Beach coastline. Photo by Bianca Kaplanek

REGION — Despite concerns from residents during their Oct. 14 meetings, City Council members in Solana Beach and Encinitas unanimously approved a modified version of a sand-replenishment project that will create 35 acres of new beach area during the next 50 years. The two cities have been working with the Army Corps of Engineers for about 15 years to reduce coastal storm damage to more than eight miles of beach beginning at the mouth of Batiquitos Lagoon in Encinitas and stretching south to include almost the entire 1.7-mile Solana Beach coastline. In addition to preventing blufftop homes from falling into the ocean, the sand replacement is expected to improve recreational opportunities, decrease the need for sea walls and increase safety by reducing the threat of bluff failures caused by wave action. From January through September of this year Solana Beach