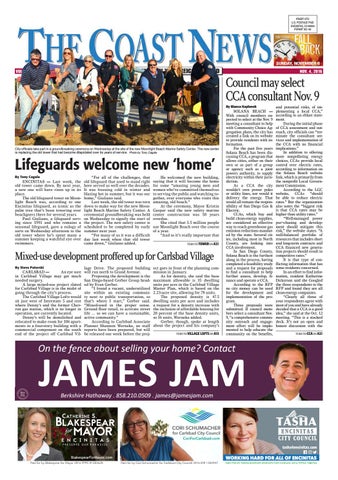 City officials take part in a groundbreaking ceremony on Wednesday at the site of the new Moonlight Beach Marine Safety Center. The new center is replacing the old tower that had become dilapidated over its years of service. Photo by Tony Cagala

ENCINITAS — Last week, the old tower came down. By next year, a new one will have risen up in its place. The old lifeguard tower on Moonlight Beach was, according to one Encinitas lifeguard, as iconic as the palm tree that’s been towering over beachgoers there for several years. Paul Giuliano, a lifeguard serving since 1991 and who remains a seasonal lifeguard, gave a eulogy of sorts on Wednesday afternoon to the old tower where he’s spent many a summer keeping a watchful eye over swimmers.

“For all of the challenges, that old lifeguard that used to stand right here served us well over the decades. It was freezing cold in winter and blazing hot in summer, but it was our home,” Giuliano said. Last week, the old tower was torn down to make way for the new Moonlight Beach Marine Safety Center. A ceremonial groundbreaking was held on Wednesday to signify the start of the project. The new safety center is scheduled to be completed by early summer next year. “For many of us it was a difficult day last week when that old tower came down,” Giuliano added.

He welcomed the new building, saying that it will become the home for some “amazing young men and women who’ve committed themselves to serving the public and watching together, over everyone who visits this amazing, old beach.” At the ceremony, Mayor Kristin Gaspar said the new safety marine center construction was 50 years overdue. She cited that 3.5 million people use Moonlight Beach over the course of a year. “And so it’s really important that TURN TO TOWER ON A21

Mixed-use development proffered up for Carlsbad Village By Steve Puterski

CARLSBAD — An eye sore in Carlsbad Village may get much needed surgery. A large mixed-use project slated for Carlsbad Village is in the midst of going through the city’s process. The Carlsbad Village Lofts would sit just west of Interstate 5 and rest where Denny’s and the former Chevron gas station, which is no longer in operation, are currently located. Denny’s will be demolished and relocated to make room for 106 apartments in a four-story building with a commercial component on the south end of the project off Carlsbad Vil-

lage Drive. The proposed building will run north to Grand Avenue. Proposing the development is the San Diego-based Gerber Group headed by Evan Gerber. “I found a vacant, underutilized site within an existing community next to public transportation, so that’s where I start,” Gerber said. “Mixed-used in the proper sense. Ground floor retail, to activate street life … so we can have a sustainable, active community.” According to Carlsbad Associate Planner Shannon Werneke, no staff reports have been prepared, but will be released one week before the proj-

ect goes in front of the planning commission in January. As for density, she said the base maximum allowable is 35 dwelling units per acre in the Carlsbad Village Master Plan, which is based on the 2.23-acre site, allowing for 78 units. The proposed density is 47.5 dwelling units per acre and includes a request for a density increase with the inclusion of affordable housing for 20 percent of the base density units, so 16 units, Werneke added. Gerber, though, spoke at length about the project and his company’s TURN TO VILLAGE LOFTS ON A15

SOLANA BEACH — With council members expected to select at the Nov. 9 meeting a consultant to help with Community Choice Aggregation plans, the city has created a link on its website to provide residents with information. For the past five years Solana Beach has been discussing CCA, a program that allows cities, either on their own or as part of a group or agency such as a joint powers authority, to supply electricity within their jurisdiction. As a CCA the city wouldn’t own power poles or utility lines, nor would it delivery the energy. That would all remain the responsibility of San Diego Gas &amp; Electric. CCAs, which buy and build clean-energy supplies, are considered an effective way to reach greenhouse gas emission reductions mandated by the state. Several cities, including most in North County, are looking into CCA involvement. In San Diego County, Solana Beach is the furthest along in the process, having completed a feasibility study and a request for proposals to find a consultant to help further assess, develop, finance and operate a CCA. According to the RFP no city money can be used for the development and implementation of the program. Three proposals were submitted. If council members select a consultant Nov. 9, “a comprehensive community outreach and engagement effort will be implemented to help educate the community on the benefits,

and potential risks, of implementing a local CCA,” according to an eblast statement. During the initial phase THE of CCA assessment and outVISTA reach, city officials can “terminate the consultant serNEWS vices and implementation of the CCA with no financial implications.” In addition to offering more nonpolluting energy choices, CCAs provide local control over electric rates, according to information on the Solana Beach website link, which is primarily from the nonprofit Local GovernRANCHO ment Commission. SFNEWS According to the LGC website, CCAs “should be able to reduce electric rates.” But the organization also notes the “biggest risk is that CCA rates may be higher than utility rates.” “Well-managed power pur¬chasing and development should mitigate this risk,” the website states. “A well-balanced portfolio of resources that includes short and long-term contracts and CCA financed new generation projects should result in competitive rates.” It is that type of conflicting information that has some residents concerned. In an effort to find information, resident Katherine Dickerson said she Googled the three respondents to the RFP and found they are all clean-energy companies. “Clearly all three of your respondents agree with most of you and have already decided that a CCA is a good idea,” she said at the Oct. 12 meeting. “This is a stacked deck. It’s not an open and honest discussion with the