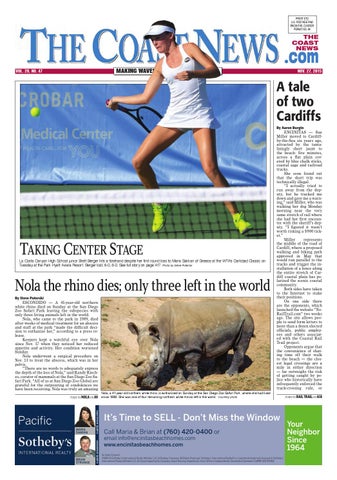 A tale of.com two Cardiffs THE By Aaron Burgin

ENCINITAS — Sue NEWS Miller moved to Cardiffby-the-Sea six years ago, attracted by the tantalizingly short jaunt to the beach: five minutes, across a flat plain covered by blue chalk sticks, coastal sage and railroad tracks. She soon found out that the short trip was technically illegal. RANCHO “I actually tried to SFNEWS run away from the deputy, but he tracked me down and gave me a warning,” said Miller, who was walking her dog Monday morning near the very same stretch of rail where she had her first encounter with the sheriff’s deputy. “I figured it wasn’t worth risking a $900 ticket.” Miller represents the middle of the road of Cardiff, where a proposed walking and biking path approved in May that would run parallel to the tracks and trigger the installation of a fence along the entire stretch of Cardiff coastal plain has polarized the scenic coastal community. Both sides have taken to the Internet to stake their positions. On one side there are the opponents, which launched the website “NoRailTrail.com” two weeks ago. The site allows people to send form letters to more than a dozen elected officials, public employees and others associated with the Coastal Rail Trail project. Opponents argue that the convenience of shaving time off their walk to the beach — the closest legal crossings are a mile in either direction — far outweighs the risk of getting caught by police who historically have infrequently enforced the track-crossing rule, or

La Costa Canyon High School junior Brett Berger hits a forehand despite her first round loss to Maria Sakkari of Greece at the WTA’s Carlsbad Classic on Tuesday at the Park Hyatt Aviara Resort. Berger lost, 6-0, 6-0. See full story on page A17. Photo by Steve Puterski

Nola the rhino dies; only three left in the world By Steve Puterski

ESCONDIDO — A 41-year-old northern white rhino died on Sunday at the San Diego Zoo Safari Park leaving the subspecies with only three living animals left in the world. Nola, who came to the park in 1989, died after weeks of medical treatment for an abscess and staff at the park “made the difficult decision to euthanize her,” according to a press release. Keepers kept a watchful eye over Nola since Nov. 17 when they noticed her reduced appetite and activity. Her condition worsened Sunday. Nola underwent a surgical procedure on Nov. 13 to treat the abscess, which was in her pelvis. “There are no words to adequately express the depth of the loss of Nola,” said Randy Rieches, curator of mammals at the San Diego Zoo Safari Park. “All of us at San Diego Zoo Global are grateful for the outpouring of condolences we have been receiving. Nola was truly an amazing

TURN TO NOLA ON A9

TURN TO RAIL TRAIL ON A18