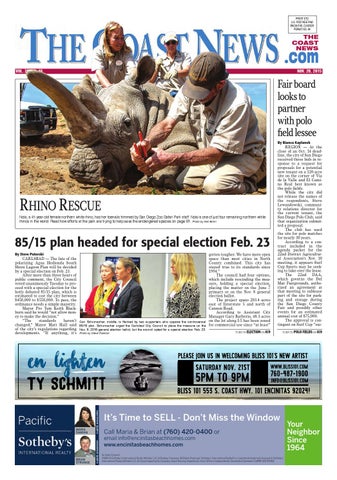 Fair board looks to . partner with polo THE VISTA field lessee NEWS

gotten tougher. We have more open space than most cities in North County combined. This city has stayed true to its standards since 1994.” The council had four options, which include rescinding the measure, holding a special election, placing the matter on the June 7 primary or on the Nov. 8 general election ballot. The project spans 203.4 acres east of Interstate 5 and north of Cannon Road. According to Assistant City Manager Gary Barberio, 48.3 acres on the lot along I-5 has been zoned for commercial use since “at least”

REGION — At the close of an Oct. 14 deadline, the city of San Diego received three bids in response to a request for proposals for a potential new tenant on a 120-acre site on the corner of Via de la Valle and El CamiRANCHO no Real best known as the polo fields. SFNEWS While the city did not release the names of the respondents, Steve Lewandowski, community relations director for the current tenant, the San Diego Polo Club, said that organization submitted a proposal. The club has used the site for polo matches for nearly 30 years. According to a contract included in the agenda packet for the 22nd District Agricultural Association’s Nov. 10 meeting, it appears Surf Cup Sports may be seeking to take over the lease. The 22nd DAA, which governs the Del Mar Fairgrounds, authorized an agreement at that meeting to sublease part of the site for parking and storage during the San Diego County Fair and possibly other events for an estimated annual cost of $75,000. The approval is contingent on Surf Cup “suc-

TURN TO ELECTION ON A19

TURN TO POLO FIELDS ON A19

Rhino Rescue Nola, a 41-year-old female northern white rhino, has her toenails trimmed by San Diego Zoo Safari Park staff. Nola is one of just four remaining northern white rhinos in the world. Read how efforts at the park are trying to help save the endangered species on page B1. Photo by Ken Bohn

CARLSBAD — The fate of the polarizing Agua Hedionda South Shore Lagoon Plan will be decided by a special election on Feb. 23. After more than three hours of public comment, the City Council voted unanimously Tuesday to proceed with a special election for the hotly debated 85/15 plan, which is estimated to cost the city between $450,000 to $550,000. To pass, the ordinance needs a simple majority. Mayor Pro Tem Keith Blackburn said he would “not allow money to make the decision.” “The standards haven’t Cori Schumacher, middle, is flanked by two supporters who oppose the controversial changed,” Mayor Matt Hall said 85/15 plan. Schumacher urged the Carlsbad City Council to place the measure on the of the city’s regulations regarding Nov. 8, 2016 general election ballot, but the council opted for a special election Feb. 23. developments. “If anything, it’s Photo by Steve Puterski