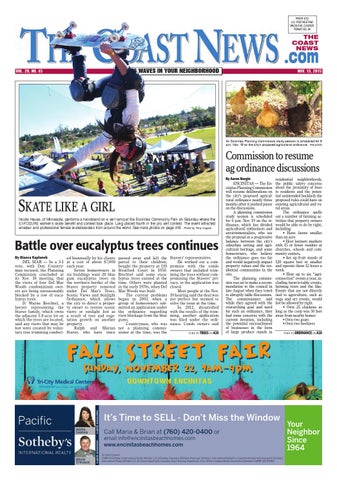 Skate like a girl Nicole Hause, of Minnesota, performs a handstand on a vert ramp at the Encinitas Community Park on Saturday where the EXPOSURE women’s skate benefit and contest took place. Long placed fourth in the pro vert contest. The event attracted amateur and professional female skateboarders from around the world. See more photos on page A18. Photo by Tony Cagala

Battle over eucalyptus trees continues ed biannually by his clients at a cost of about $7,000 each year. Seven homeowners in six buildings want 20 blue gum eucalyptus trees on the northern border of the Staver property removed under Del Mar’s Trees, Scenic Views and Sunlight Ordinance, which allows the city to direct a property owner to restore scenic views or sunlight lost as a result of tree and vegetation growth on another property. Ralph and Marian Staver, who have since

passed away and left the parcel to their children, bought the property at 110 Stratford Court in 1950. Brechtel said some eucalyptus trees existed at the time. Others were planted in the early 1970s, when Del Mar Woods was built. The current problems began in 2003, when a group of homeowners submitted an application under the ordinance regarding view blockage from the blue gums. Countryman, who was not a planning commissioner at the time, was the

Stavers’ representative. He worked out a compromise with the condo owners that included trimming the trees without compromising the Stavers’ privacy, so the application was closed. Most people at the Nov. 10 hearing said the deal was not perfect but seemed to solve the issue at the time. In 2012, dissatisfied with the results of the trimming, another application was filed under the ordinance. Condo owners said TURN TO TREES ON A20

residential neighborhoods, RANCHO the public safety concerns about SFNEWS the proximity of bees to residents and the potential unintended backlash the proposed rules could have on existing agricultural and rural areas. The ordinance spells out a number of farming activities that property owners would be able to do by right, including: • Have farms smaller than an acre • Host farmers markets with 15 or fewer vendors at churches, schools and community centers, • Set up fruit stands of 120 square feet or smaller and operate them 12 hours a week • Host up to six “agriconnection” events a year, including farm-to-table events, farming tours and the like. Events that are not directly tied to agriculture, such as yoga and art events, would not be allowed by right. • Own 25 chickens as long as the coop was 50 feet away from nearby homes • Own two goats • Own two beehives

TURN TO ORDINANCE ON A20

DEL MAR — In a 3-1 vote, with Don Countryman recused, the Planning Commission concluded at its Nov. 10 meeting that the views of four Del Mar Woods condominium owners are being unreasonably blocked by a row of eucalyptus trees. D. Wayne Brechtel, a lawyer representing the Staver family, which owns the adjacent 5.8-acre lot on which the trees are located, said any views that may be lost were created by voluntary tree trimming conduct-

ENCINITAS — The Encinitas Planning Commission will resume deliberations on the city’s proposed agricultural ordinance nearly three months after it pushed pause on the discussions. A planning commission study session is scheduled for 6 p.m. Nov. 19 on the ordinance, which has divided agricultural enthusiasts and environmentalists, who see the proposal as a progressive balance between the city’s suburban setting and agricultural heritage, and some homeowners, who believe the ordinance goes too far and would negatively impact property values and the residential communities in the city. The planning commission was set to make a recommendation to the council in late August when they voted to abruptly table discussions. The commissioners said while they agreed with the overarching goal and need for such an ordinance, they had some concerns with the current iteration, including the potential encroachment of businesses in the form of large produce stands in