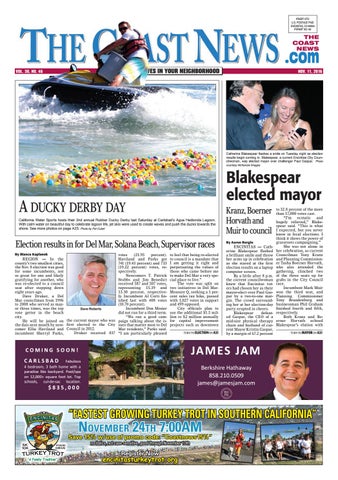 REGION — In the county’s two smallest cities, the Nov. 8 election was good for some incumbents, not so great for one and likely gratifying for another, who was re-elected to a council seat after stepping down eight years ago. Dave Druker, a Del Mar councilman from 1996 to 2008 who served as mayor three times, was the top Dave Roberts vote getter in the beach city. He will be joined on the current mayor who was the dais next month by new- first elected to the City comer Ellie Haviland and Council in 2012. Druker received 837 incumbent Sherryl Parks,

votes (21.95 percent). Haviland and Parks got 741 (19.43 percent) and 733 (19.22 percent) votes, respectively. Newcomers T. Patrick Stubbs and Jim Benedict received 587 and 507 votes, representing 15.39 and 13.30 percent, respectively. Incumbent Al Corti finished last with 408 votes (10.70 percent). Incumbent Don Mosier did not run for a third term. “We ran a good campaign talking about the issues that matter most to Del Mar residents,” Parks said. “I am particularly pleased

to feel that being re-elected to council is a mandate that I am getting it right and perpetuating the values of those who came before me to make Del Mar a very special place to live.” The vote was split on two initiatives in Del Mar. Measure Q, seeking a 1 percent sales tax hike, passed with 1,027 votes in support and 499 opposed. City officials plan to use the additional $1.5 million to $2 million annually for capital improvement projects such as downtown TURN TO ELECTION ON A21

Kranz, Boerner Horvath and Muir to council By Aaron Burgin

ENCINITAS — Catherine Blakespear flashed a brilliant smile and threw her arms up in celebration as she stared at the first election results on a laptop computer screen. By a little after 8 p.m. the current councilwoman knew that Encinitas voters had chosen her as their mayor-elect over Paul Gaspar by a two-to-one margin. The crowd surrounding her at her election-day party erupted in cheers. Blakespear defeated Gaspar, the CEO of a mid-size physical therapy chain and husband of current Mayor Kristin Gaspar, by a margin of 67.2 percent

to 32.8 percent of the more than 17,000 votes cast. “I’m ecstatic and hugely relieved,” Blakespear said. “This is what I expected, but you never know in local elections. I think it shows the power of grassroots campaigning.” She was not alone in her celebration, as current Councilman Tony Kranz and Planning Commissioner Tasha Boerner Horvath, who also attended the gathering, clinched two of the three seats up for grabs in the City Council race. Incumbent Mark Muir won the third seat, and Planning Commissioner Tony Brandenburg and businessman Phil Graham finished fourth and fifth, respectively. Both Kranz and Boerner Horvath echoed Blakespear’s elation with TURN TO MAYOR ON A21