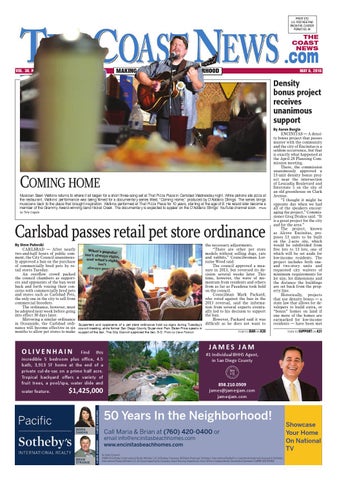 the necessary adjustments. “There are other pet store models without selling dogs, cats and rabbits,” Councilwoman Lorraine Wood said. The council approved a measure in 2013, but reversed its decision several weeks later. This time, however, the wave of momentum from residents and others from as far as Pasadena took hold on the council. Councilman Mark Packard, who voted against the ban in the 2013 reversal, said the information from several experts eventually led to his decision to support the ban. However, Packard said it was difficult as he does not want to

ENCINITAS — A densiNEWS ty bonus project that passes muster with the community and the city of Encinitas is a seldom occurrence, but that is exactly what happened at the April 28 Planning Commission meeting. There, the commission unanimously approved a 13-unit density bonus project near the intersection RANCHO of Leucadia Boulevard and Interstate 5 on the site of SFNEWS an old greenhouse on Clark Avenue. “I thought it might be opposite day when we had all of the speakers encouraging the project,” Commissioner Greg Drakos said. “It is a great project for the city and for the area.” The project, known as Alcove Encinitas, proposes 13 units to be built on the 2-acre site, which would be subdivided from five lots to 13 lots, one of which will be set aside for low-income residents. The project includes both oneand two-story units and requested city waivers of minimum requirements for lot size, lot dimensions and the distance the buildings are set back from the property line. Historically, projects that use density bonus — a state law that allows for developers to build extra, or “bonus” homes on land if one more of the homes are earmarked for low-income residents — have been met

TURN TO SUPPORT ON A21

Coming home Musician Sean Watkins returns to where it all began for a short three-song set at That Pizza Place in Carlsbad Wednesday night. While patrons ate pizza at the restaurant, Watkins’ performance was being filmed for a documentary series titled, “Coming Home,” produced by D’Addario Strings. The series brings musicians back to the place that brought inspiration. Watkins performed at That Pizza Place for 10 years, starting at the age of 8. He would later become a member of the Grammy Award-winning band Nickel Creek. The documentary is expected to appear on the D’Addario Strings’ YouTube channel soon. Photo

CARLSBAD — After nearly two-and-half hours of public comment, the City Council unanimously approved a ban on the purchase of commercially bred pets by retail stores Tuesday. An overflow crowd packed the council chambers as supporters and opponents of the ban went back and forth voicing their concerns with commercially bred pets and stores such as Carlsbad Pets, the only one in the city to sell from commercial breeders. The ordinance, however, must be adopted next week before going into effect 30 days later. Mirroring a similar ordinance in Oceanside, the Carlsbad ordi- Supporters and opponents of a pet store ordinance hold up signs during Tuesday’s nance will become effective in six council meeting, while former San Diego County Supervisor Pam Slater-Price speaks in months to allow pet stores to make support of the ban. The City Council approved the ban, 5-0. Photo by Steve Puterski

Find this incredible 5 bedroom plus office, 4.5 bath, 3,913 SF home at the end of a private cul-de-sac on a prime half acre. Tropical backyard offers a variety of fruit trees, a pool/spa, water slide and