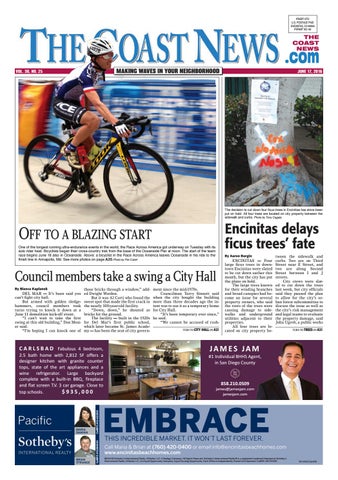 .com The decision to cut down four ficus trees in Encinitas has since been put on hold. All four trees are located on city property between the sidewalk and curbs. Photo by Tony Cagala

Off to a blazing start One of the longest running ultra-endurance events in the world, the Race Across America got underway on Tuesday with its solo rider heat. Bicyclists began their cross-country trek from the base of the Oceanside Pier at noon. The start of the team race begins June 18 also in Oceanside. Above: a bicyclist in the Race Across America leaves Oceanside in his ride to the finish line in Annapolis, Md. See more photos on page A20.Photo by Pat Cubel

DEL MAR — It’s been said you can’t fight city hall. But armed with golden sledgehammers, council members took turns trying to knock it down at a June 11 demolition kick-off event. “I can’t wait to take the first swing at this old building,” Don Mosier said. “I’m hoping I can knock one of

those bricks through a window,” added Dwight Worden. But it was Al Corti who found the sweet spot that made the first crack in the nearly 100-year-old facility. “Down, down,” he shouted as bricks hit the ground. The facility — built in the 1920s for Del Mar’s first public school, which later became St. James Academy — has been the seat of city govern-

ment since the mid-1970s. Councilman Terry Sinnott said when the city bought the building more than three decades ago the intent was to use it as a temporary home for City Hall. “It’s been temporary ever since,” he said. “We cannot be accused of rushTURN TO CITY HALL ON A21

ENCINITAS — Four large ficus trees in downtown Encinitas were slated to be cut down earlier this month, but the city has put the plans on hold. The large trees known for their winding branches and broad canopies had become an issue for several property owners, who said the roots of the trees were causing damage to sidewalks and underground utilities adjacent to their properties. All four trees are located on city property be-

tween the sidewalk and curbs. Two are on Third Street near E Street, and two are along Second Street between I and J streets. City crews were slated to cut down the trees last week, but city officials said they paused the plan to allow for the city’s urban forest subcommittee to discuss the issue as well as the city’s risk management and legal teams to evaluate the property damage, said John Ugrob, a public works TURN TO TREES ON A21