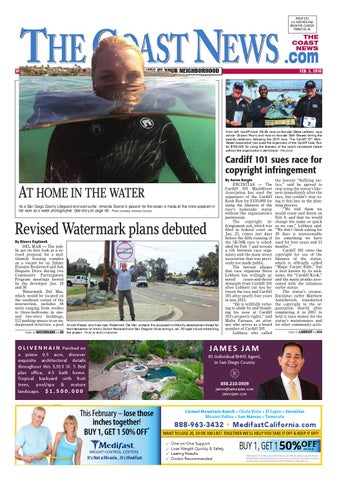 awards ceremony following the 2014 race. The Cardiff 101 MainStreet Association has sued the organizers of the Cardiff Kook Run for $150,000 for using the likeness of the race’s namesake statue without the organization’s permission. File photo

ENCINITAS — The Cardiff 101 MainStreet Association has sued the organizers of the Cardiff Kook Run for $150,000 for using the likeness of the race’s namesake statue without the organization’s permission. The copyright infringement suit, which was filed in federal court on Jan. 25, comes just days before the fifth running of the 5K/10K race is scheduled for Feb. 7 and reveals a rift between race organizers and the main street association that was previously not made public. The lawsuit alleges that race organizer Steve Lebherz has willingly ignored cease-and-desist demands from Cardiff 101 after Lebherz cut ties between the race and Cardiff 101 after nearly four years in late 2015. “He is willfully refusing to abide by and thumbing his nose at Cardiff 101’s property rights,” said Malte Farnaes, an attorney who serves as a board member of Cardiff 101. Lebherz, who called

At home in the water As a San Diego County Lifeguard and avid surfer, Amanda Scarski’s passion for the ocean is made all the more apparent in her work as a water photographer. See story on page A8. Photo courtesy Amanda Scarski

DEL MAR — The public got its first look at a revised proposal for a multifamily housing complex on a vacant lot on Jimmy Durante Boulevard and San Dieguito Drive during two Community Participation Program meetings hosted by the developer Jan. 28 and 30. Watermark Del Mar, which would be located on the southeast corner of the intersection, includes 48 units ranging from studios to three-bedrooms in oneand two-story buildings, 112 parking spaces in an underground structure, a pool Arnold Wiesel, who lives near Watermark Del Mar, protests the proposed multifamily development slated for TURN TO WATERMARK ON A9

the intersection of Jimmy Durant Boulevard and San Dieguito Drive during a Jan. 30 open house introducing the project. Photo by Bianca Kaplanek

the lawsuit “bullying tactics,”RANCHO said he agreed to SFNEWS stop using the statue’s likeness immediately after the race, but couldn’t stop using it this late in the planning process. “We told them we would cease and desist on Feb. 8, and that we would change the name as quick as we can,” Lebherz said. “We don’t think asking for 30 days is unreasonable for something we have used for four years and 11 months.” Cardiff 101 owns the copyright for use of the likeness of the statue, which is officially called “Magic Carpet Ride,” but is best known by its nickname, the “Cardiff Kook,” and the many pranks associated with the infamous surfer statue. The statue’s creator, Encinitas surfer Matthew Antichevich, transferred the copyright to the organization shortly after completing it in 2007 to help it raise money for the statue’s maintenance and for other community activ-

TURN TO LAWSUIT ON A14