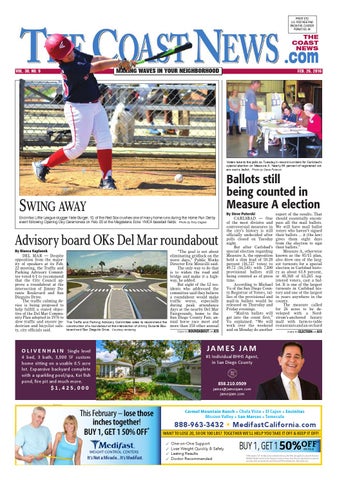 .com Voters take to the polls on Tuesday in record numbers for Carlsbad’s special election on Measure A. Nearly 64 percent of registered voters cast a ballot. Photo by Steve Puterski

Ballots still RANCHO SFNEWS being counted in . Measure A election

TURN TO ELECTION ON A15

It’s Not a Miracle...It’s Medifast.

TURN TO ROUNDABOUT ON A15

report of the results. That should essentially encompass all the mail ballots. We still have mail ballot voters who haven’t signed their ballots … it (the law) gives them eight days from the election to sign their ballots.” Measure A, otherwise known as the 85/15 plan, also drew one of the largest turnouts for a special election in Carlsbad history as about 63.8 percent, or 40,368 of 63,265 registered voters, cast a ballot. It is one of the largest turnouts in Carlsbad history and one of the largest in years anywhere in the county. The measure called for 26 acres to be developed with a Nordstrom’s-anchored luxury mall with farm-to-table restaurants and an orchard

“The goal is not about eliminating gridlock on the worst days,” Public Works Director Eric Minicilli said. The only way to do that is to widen the road and bridge and make it a highway, he added. But eight of the 12 residents who addressed the committee said they believe a roundabout would make traffic worse, especially during peak attendance days at the nearby Del Mar Fairgrounds, home to the San Diego County Fair, annual horse race meet and more than 350 other annual

CARLSBAD — One of the most divisive and controversial measures in the city’s history is still officially undecided after polls closed on Tuesday night. But after Carlsbad’s special election regarding Measure A, the opposition held a slim lead of 50.28 percent (16,727 votes) to 49.72 (16,541) with 7,100 provisional ballots still being counted as of press time. According to Michael Vu of the San Diego County Registrar of Voters, tallies of the provisional and mail-in ballots would be released on Thursday and Friday evenings. “Mail-in ballots will get into the count first,” Vu explained. “We will work over the weekend and on Monday do another