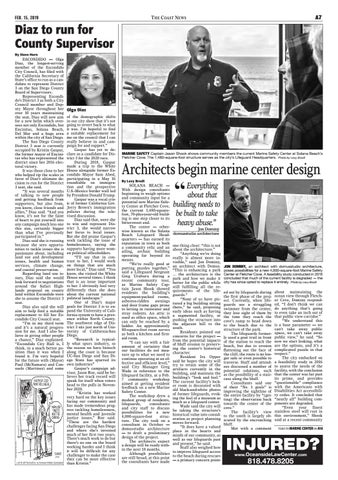 Diaz to run for County Supervisor By Steve Horn

ESCONDIDO — Olga Diaz, the longest-serving member of the Escondido City Council, has filed with the California Secretary of State’s office to run as a candidate to represent District 3 on the San Diego County Board of Supervisors. Representing Escondido’s District 3 as both a City Council member and Deputy Mayor throughout her over 10 years maintaining the seat, Diaz will now aim for a new helm which oversees not only Escondido, but Encinitas, Solana Beach, Del Mar and a huge area within the city of San Diego. The San Diego County District 3 seat is currently occupied by Kristin Gaspar, the former mayor of Encinitas who has represented the district since her 2016 electoral victory. It was those close to her who helped tip the scales in favor of Diaz’s ultimate decision to run for the District 3 seat, she said. “It was several months of talking to new people and getting feedback from supporters, but also from, you know, close friends and allies,” Diaz said. “And you know, it’s not for the faint of heart to put yourself into any campaign much less one this size, certainly bigger than what I’ve previously participated in.” Diaz said she is running because she sees opportunities to tackle issues she is passionate about, including land use and development issues, health and human services, climate change, and coastal preservation. Regarding land use issues, Diaz said she would look forward to negotiations around the Safari Highlands proposal on county land within Escondido were she to assume the District 3 seat. Diaz also said she will aim to help find a suitable replacement to fill her Escondido City Council seat. “I’m in my third term and it’s a natural progression for me. And I also believe in giving other people a chance,” Diaz explained. “Escondido City Hall is, I think, in a much better position than it was when I found it. I’m very hopeful for the future with (Mayor) Paul (McNamara) and Consuelo (Martinez) and some

Olga Diaz of the demographic shifts in our city show that it’s not going to revert back to what it was. I&#39;m hopeful to find a suitable replacement for me on the council that I can really believe in and campaign for and support.” Gaspar has yet to declare as a candidate for District 3 for the 2020 race. During 2018, Gaspar made a trip to the White House alongside former Escondido Mayor Sam Abed, participating in a May 16 roundtable on immigration and the prospective U.S.-Mexico border wall led by President Donald Trump. Gaspar was a vocal critic of former California Gov. Jerry Brown’s immigration policies during the televised discussion. Diaz said that, were she to win and represent District 3, she would narrow her focus to local issues. But she did praise Gaspar’s work tackling the issue of homelessness, saying she supports having more women political officeholders. “I&#39;ll say that in contrast to her, I would work on things that are much more local,” Diaz said. “You know, she visited the White House several times. I think that is an issue important to her. I obviously feel very differently than she does about the current national political landscape.” One of Diaz’s major goals for District 3 is to expand the University of California system to have a presence within North County. The southwest edge of District 3 sits just north of University of California-San Diego. “Research is typically what spurs industry, so the reason we have biotech along the coast is because UC-San Diego and San Diego State has spurred its own industries” Gaspar’s campaign advisor, Jason Roe, said he believes her track record will speak for itself when voters head to the polls in November 2020. “Kristin has worked very hard on the key issues facing our community and has made tremendous progress tackling homelessness, mental health and juvenile justice issues,” Roe said. “These are the hardest challenges facing San Diego and where she’s invested much of her first two years. There’s much work to do but there’s no one on the board working harder and I think it will be difficult for any challenger to make the case they can be more effective than Kristin.”

SOLANA BEACH — With design consultants beginning to weigh options and community input for a potential new Marine Safety Center at Fletcher Cove, the current 1,480-squarefoot, 70-plus-year-old building is one step closer to its bittersweet end. The center — otherwise known as the Solana Beach Lifeguard Headquarters — has earned its reputation in town as both a community relic and an ailing, archaic building operating far beyond its means. “We’re really good at putting puzzles together,” said a Lifeguard Sergeant Greg Uruburu during a recent community tour, as Marine Safety Captain Jason Shook showed residents the building’s equipment-packed rooms, asbestos-ridden awnings and door frame gaps prone to letting in rainwater and stray rodents. An attic is used as office space, which can only be reached by a ladder. An approximately 80-square-foot room serves as both a kitchen and firstaid room. “I can say with a fair amount of certainty that our facilities do not measure up to what we need to continue operating at an effective and efficient level,” said City Manager Greg Wade in reference to the lifeguard facility, at a Feb. 7 community workshop aimed at getting resident feedback on a new Marine Safety Center. The workshop drew a modest group of residents, lifeguards, consultants and city staff to discuss possibilities for a new 4,000-square-foot structure. The city took on a consultant in October — domusstudio architecture — to draft a preliminary design of the project. The architects expect a design will be ready within the next 18 months. Although possibilities are still broad, at this point the consultants have made

Everything about that building needs to be built to take heavy abuse.” Jon Dominy domusstudio architecture

one thing clear: “this is not about the architecture.” “Anything we’re doing really is almost more invisible,” said Jon Dominy, an architect with Domus. “This is enhancing a park … the architecture is the park and how we make it better for the public while still fulfilling all the requirements of the lifeguards.” “None of us have pictured a big building sitting there,” he said, proposing early ideas such as having a segmented facility, or pushing the structure into the adjacent hill to the south. Residents pointed out concerns for the project — from the potential impacts of bluff erosion to preserving the center’s historical character. Resident Ira Opper said he hopes the city will try to retain some of the artifacts currently in the building, and maintain the building’s “look and feel.” The current facility’s locker room is decorated with old black-and-white photos of former lifeguards, evoking the feel of a museum as much as a lifeguard center. Wade said the city will be taking the structure’s historical value into consideration as project planning moves forward. “It does have a valued place in the hearts and minds of our community, as well as our lifeguards past and present,” he said. Staff also weighed how to improve lifeguard access to the beach during rescues — a primary concern point-

JON DOMINY, an architect with domusstudio architecture, poses possibilities for a new 4,000-square-foot Marine Safety Center at Fletcher Cove. A feasibility study conducted in 2016 concluded that much of the current facility is degraded — the city has since opted to replace it entirely. Photo by Lexy Brodt

ed out by lifeguards during the first phase of the project. Currently, when lifeguards see a struggling swimmer from the center, they lose sight of them by the time they reach the cove’s ramp to head down to the beach due to the structure of the park. The lifeguards formerly used a goat trail in front of the station to reach the beach, but due to erosion flattening out the face of the cliff, the route is no longer safe or even possible to traverse. Staff and attendees discussed a number of potential solutions, such as the possibility of a staircase along the bluff. Consultants said one of their “No. 1 goals” is improving the sightline of the entire facility by “(getting) the observation back towards the center of the cove.” The facility’s view to the south is largely obscured by the encroaching bluff. Met with a comment

about maintaining the ocean view through Fletcher Cove, Dominy responded, “I don’t think we can do anything that’s going to even take an inch out of that public view corridor.” “We understand this is a base parameter — we can’t take away public space, we can’t take away public view,” he said. “So now we start looking, what are the options, and it’s a complicated puzzle in that respect.” The city embarked on a feasibility study in 2016 to assess the needs of the facility, with the conclusion that the center was far past its prime, and provides “questionable” compliance with the Americans with Disabilities Act accessibility codes. It concluded that “nearly all” building components are degraded. “Even your finest stainless steel will rust in this environment,” Shook said at a recent community TURN TO MARINE CENTER ON A16