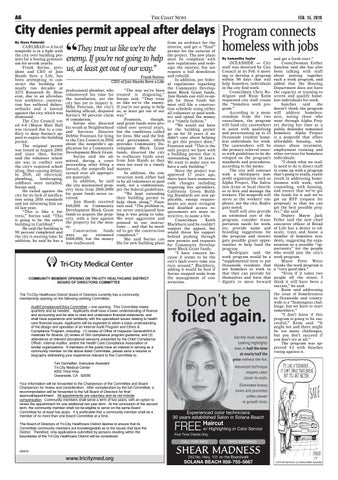 CARLSBAD — A local nonprofit is in a fight with the city over building permits for a boxing gymnasium for at-risk youths. Frank Sorino, president and CEO of Join Hands Save a Life, has been attempting to construct the building for nearly two decades at 3275 Roosevelt St. However, due to an all-volunteer workforce, construction has suffered delays, setbacks and a lawsuit against the city, which was dismissed. The City Council voted 4-0 (Mayor Matt Hall was recused due to a conflict) to deny Sorino’s appeal to expire the building permit. The original permit was issued in August 2001 and since then, Sorino said the volunteer schedule was in conflict over the city’s required scheduling, thus causing delays. In 2018, all electrical, plumbing, landscaping, subfloors were installed, Sorino said. He railed against the city for its lack of notification using 2016 standards and not informing him until last year. “This is like a fortress,” Sorino said. “This is going to be the safest building in Carlsbad.” He said the building is 90 percent completed and the city is wasting time. In addition, he said he has a

They treat us like we’re the enemy. If you’re not going to help us, at least get out of our way.” Frank Sorino CEO of Join Hands Save a Life

professional plumber, who volunteered his time for the installation, yet the city has yet to inspect it. Mike Peterson, the city’s building official, disputed Sorino’s 90 percent claim of completion. Sorino also directed his wrath at Neighborhood and Services Director Debbie Fountain for lying to the City Council in 2002 about the nonprofit’s application for a Community Development Block Grant. Sorino said she admitted, during a court proceeding after filing a lawsuit, the nonprofit had turned over all appropriate materials. In addition, he said the city maintained property liens from 2001-2006 for grant funds never received. Join Hands received $60,000 in Community Development Block Grant funds to acquire the property, with a lien against the property for the money. Construction funds were an estimated $600,000, but the money was reallocated.

“The way we’ve been treated is disgusting,” Sorino said. “They treat us like we’re the enemy. If you’re not going to help us, at least get out of our way.” Fountain, though, said grant funds were provided over several years, but the conditions called for liens. She said the federal government, which provides Community Development Block Grant funds, directed the city to reallocate funds away from Join Hands as they were not used in a timely manner. In addition, the construction work either had to be all volunteers or paid work, not a combination, per the federal guidelines. “We kept extending their building permit to help them along,” Fountain said. “The problem is, we never anticipated how long it was going to take. We were aggressive and pointed in our instructions … and that he needed to get the construction completed.” She said Sorino can file for new building plans

Audit/Compliance/Ethics Committee – one opening. This Committee meets quarterly and as needed. Applicants shall have a basic understanding of finance and accounting and be able to read and understand financial statements, and shall have experience and familiarity with the specialized issues relating to health care financial issues. Applicants will be expected to attain a basic understanding of the design and operation of an Internal Audit Program and Ethics &amp; Compliance Program, including: (1) review of Office of Inspector General/AHLA materials for Boards; (2) review of OIG compliance program guidance; and (3) attendance at relevant educational sessions presented by the Chief Compliance Officer, Internal Auditor, and/or the Health Care Compliance Association or similar organizations. If members of the public have an interest in serving as a community member on the above listed Committee, please send a resume or biography delineating your experience relevant to this Committee to: Teri Donnellan, Executive Assistant Tri-City Medical Center 4002 Vista Way Oceanside, CA 92056

Your information will be forwarded to the Chairperson of the Committee and Board Chairperson for review and consideration. After consideration by the full Committee, a recommendation will be forwarded to the full Board of Directors for final approval/appointment. All appointments are voluntary and do not include compensation. Community members shall serve a term of two years, with an option to renew the appointment for one additional two year term. At the conclusion of the second term, the community member shall not be eligible to serve on the same Board Committee for at least two years. It is preferable that a community member shall be a member of no more than one Board Committee at a time. The Board of Directors of Tri-City Healthcare District desires to ensure that its Committee community members are knowledgeable as to the issues that face the District. Therefore, only applications submitted by persons residing within the boundaries of the Tri-City Healthcare District will be considered.

from an architect for the interior, and get a “final” permit for the exterior of the project. The new plans must be compliant with new regulations and redesign the interior, but not require a full demolition and rebuild. In addition, per federal regulations regarding the Community Development Block Grant funds, Join Hands can still re-apply for those funds but must still file a construction schedule using either all volunteer or paid workers and spend the money in a “timely fashion.” “We would not have let the building permit go on for 18 years if we didn’t care about helping to get this project done,” Fountain said. “This is the only project we have with a building permit that is outstanding for 18 years. We want to make sure we have a safe building.” Since the project was approved 17 years ago, there have been numerous code changes including requiring fire sprinklers, California Green Building Standards are now applicable, energy requirements are more stringent and disabled access requirements are more restrictive, to name a few. Councilman Keith Blackburn said he couldn’t support the appeal, but would throw his support behind pushing through new permits and requests for Community Development Block Grant funds. “I have concern because it seems to be the city’s fault every time you turn around,” Blackburn, adding it would be best if Sorino stepped aside from the management of construction.

OCEANSIDE — City staff was directed by City Council at its Feb. 6 meeting to develop a program within 90 days that will help homeless individuals in the city find work. Councilmen Chris Rodriguez and Ryan Keim requested city staff create the “homeless work program.” According to a memorandum from the two councilmen, the program will fund city caseworkers to assist with qualifying and prescreening up to 25 Oceanside resident homeless individuals for work. The caseworkers will be the primary referral sources with guidelines to be developed on the program’s standards and procedures, according to the memo. The city will contract with a third-party nonprofit organization such as Alpha Project, The Salvation Army or local churches to hire and manage the workers. The nonprofit will serve as the workers’ employer, not the city, Rodriguez noted. Staff will also provide an estimated cost of the program, consider transportation needs for workers, provide name and branding suggestions for the program and investigate possible grant opportunities to help fund the program. Rodriguez said the work program would be a “supplemental item to put Oceanside residents that are homeless to work so that they can provide for themselves and have that dignity to move forward

and get a fresh start.” Councilwoman Esther Sanchez said she has also been talking with staff about putting together such a work program, and added that the Housing Department does not have the capacity or training to screen and qualify homeless individuals for work. Sanchez said she doesn’t think the program will address homelessness, noting those who went through Alpha Project during her time as a public defender remained homeless. Alpha Project is a nonprofit that offers affordable housing, substance abuse treatment, employment training and other services for homeless individuals. “I think what we really need to do is direct staff to come up with a program that’s going to really, really result in addressing homelessness with work, with counseling, with housing, and ensure that we’ve got the funds for it and we’ve got an RFP (request for proposal) so that we can get the best possible project,” she said. Deputy Mayor Jack Feller said the new chief executive officer of Bread of Life has a desire to educate, train and house a number of homeless residents, suggesting the organization as a possible “opportunity” for the people who would join the city’s work program. Mayor Peter Weiss thinks the work program is a “very good idea.” “Even if it takes two people off the street, I think it will have been a success,” he said. Keim said addressing the issue of homelessness in Oceanside and countywide is a “humongous challenge, but we have to start somewhere.” “I don’t know if this program is going to be successful,” Keim said. “It might not and there might be too many challenges, but you don’t succeed if you don’t try at all.” The program was approved 4-1 with Sanchez voting against it.