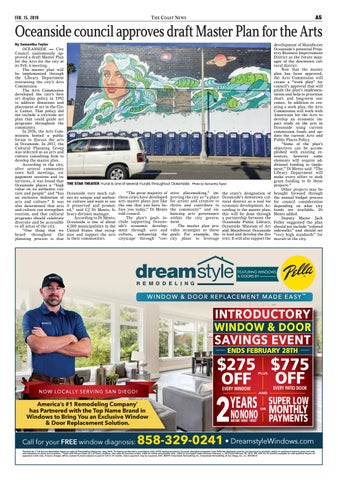 OCEANSIDE — City Council unanimously approved a draft Master Plan for the Arts for the city at its Feb. 6 meeting. The master plan will be implemented through the Library Department overseeing the city’s Arts Commission. The Arts Commission developed the city’s first art display policy in 1992 to address donations and placement of art in the Civic Center. That policy did not include a citywide art plan that could guide art programs throughout the community. In 2016, the Arts Commission hosted a public forum to discuss the arts in Oceanside. In 2017, the Cultural Planning Group was selected as an arts and culture consulting firm to develop the master plan. According to the city, after several community town hall meetings, engagement sessions and interviews, it was found that Oceanside places a “high value on its authentic culture and people” and “has an inclusive definition of arts and culture.” It was also determined that arts and culture can strengthen tourism, and that cultural programs should celebrate diversity and be accessible to all areas of the city. “One thing that we heard throughout the planning process is that

THE STAR THEATER mural is one of several murals throughout Oceanside.

Oceanside very much values its unique and authentic culture and want to see it preserved and promoted,” said CJ Di Mento, library division manager. According to Di Mento, Oceanside is one of about 4,500 municipalities in the United States that recognize and support the arts in their communities.

“The great majority of these cities have developed arts master plans just like the one that you have before you today,” Di Mento told council. The plan’s goals include supporting Oceanside’s economic development through arts and culture, enhancing the cityscape through “cre-

ative placemaking,” improving the city as “a place for artists and creative to thrive and contribute to the community” and enhancing arts governance within the city government. The master plan provides strategies to these goals. For example, the city plans to leverage

the state’s designation of Oceanside’s downtown cultural district as a tool for economic development. According to the master plan, this will be done through a partnership between the Oceanside Public Library, Oceanside Museum of Art and MainStreet Oceanside to lead and develop the district. It will also support the

development of MainStreet Oceanside’s potential Property Business Improvement District as the future manager of the downtown cultural district. Now that the master plan has been approved, the Arts Commission will create a “work plan” for council’s approval that will guide the plan’s implementation and help to prioritize short- and long-term outcomes. In addition to creating a work plan, the Arts Commission will work with Americans for the Arts to develop an economic impact study on the arts in Oceanside using current commission funds and update the current Arts and Public Places Policy. “Some of the plan’s objectives can be accomplished with existing resources, however some elements will require additional funding to implement,” Di Mento said. “The Library Department will make every effort to seek grant funding to fit these projects.” Other projects may be brought forward through the annual budget process for council consideration depending on what city funds are available, Di Mento added. Deputy Mayor Jack Feller suggested the plan should not include “colored sidewalks” and should set “very high standards” for murals in the city.

America’s #1 Remodeling Company1 has Partnered with the Top Name Brand in Windows to Bring You an Exclusive Window &amp; Door Replacement Solution.

Call for your FREE window diagnosis:

1 Ranked No.1 Full Service Remodeler based on sales by Remodeling Magazine, May 2018. *In testing performed in accordance with ASTM testing standards, Duracast fiberglass composite from Pella has displayed superior performance in strength, ability to withstand extreme heat and cold, and resistance to dents and scratches. **Valid with the purchase of 4 or more windows. Not valid on previous orders. Valid on initial consultation only. Valid on purchases made between February 1, 2019 and February 28, 2019. 0% APR for 24 months available to well qualified buyers on approved credit only. Finance charges will be waived if promo balance is paid in full in 24 months. Down payment may be required, OAC. ©2019 Dreamstyle Remodeling Inc. Dreamstyle Remodeling of San Diego, Inc. Lic. 995160 B-