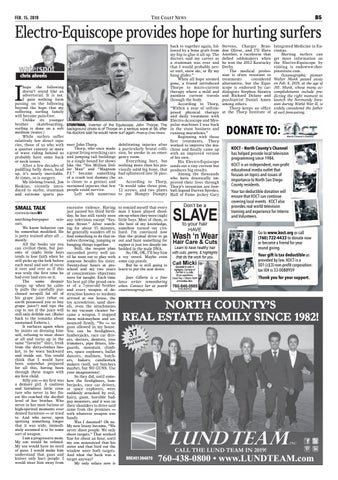 hope the following doesn’t sound like an advertorial. It is not. I gain nothing form passing on the following beyond the hope that my suffering surfing family will become pain-free. Unlike its younger brother skateboarding, surfing is done on a soft medium (water.) While surfers suffer relatively few direct injuries, those of us who with a quarter century or more of wave riding behind us probably have some back or neck issues. After a few decades of paddling belly down, head up, it’s nearly inevitable. At times, so is surgery. My lifelong friend, Jim Hoskins, recently introduced to surfer, stuntman and extreme sports pio-

SMALL TALK CONTINUED FROM B1

anything-but-paper scissors. We know behavior can be somewhat modified. He is potty trained after all … mostly. All the books say you can civilize them, but parents of (sigh) little boys tends to lose faith when he still picks up the fork before each meal and sort of turns it over and over as if this was truly the first time he had ever laid eyes on it. The same despair creeps up when he calmly pulls the carefully purchased no-spill lid off of his grape juice (what on earth possessed you to buy grape juice?) and tips the cup to see if the juice will still only dribble out. (Refer back to the remarks about unstained T-shirts.). It surfaces again when he insists on dressing himself, refusing to wear shoes at all and turns up in the same “favorite” shirt, fresh from the dirty-clothes basket, to be worn backward and inside out. You would think that I would have been somewhat prepared for all this, having been through these stages with my first child. Silly you — my first was a demure girl. A cautious and fastidious little creature who never in her finest fits reached the decibel level of her brother. Who never in her most furious or high-spirited moments ever dented furniture — or tried to. And who never, upon spotting something longer that it was wide, immediately assumed it to be some sort of weapon. I am a progressive mom. My son would be refined. My son would have no need of guns. I would make him understand that guns and knives only hurt people. I would steer him away from

STUNTMAN, inventor of the Equiscope, John Thorpe. The background photo is of Thorpe on a serious wave at 56, after his doctors said he would never surf again. Photo by Chris Ahrens

neer John Thorp. Thorp, who once made a great living wrecking cars and jumping tall buildings in a single bound for shows like the “Six Million Dollar Man” and “Magnum P.I.” became something of a crash test dummy (he is closer to a genius) and sustained injuries that few people could survive. Left with numerous

debilitating injuries after a particularly brutal collision, he awoke in an emergency room. Everything hurt, but nothing more than his previously solid leg bone, that had splintered into 56 pieces. According to Thorp, “It would take three pins, 12 screws, and two plates to put Humpty Dumpty

excessive violence. Having just passed his third birthday, he has still rarely seen any television except “Sesame Street.” After watching for about 15 minutes, he generally wanders off to find something to do that involves throwing, jumping or banging things together. Still, the no-gun plan succeeded pretty well until he went out to play with someone besides his sister. Twenty-four hours at preschool and my two years of conscientious objections were for naught. Each time his best pal (the proud owner of a 7-year-old brother and every weapon of destruction known to toydom) arrived at our house, the toy screwdriver, sand shovels, even the attachments to my vacuum cleaner became a weapon. I stopped them mid-mayhem and announced firmly, “No — no guns allowed in my house. You can be firefighters, lumberjacks, race car drivers, doctors, dentists, tree trimmers, pipe fitters, lifeguards, mountain climbers, space explorers, ballet dancers, mailmen, butchers, bakers, candlestick makers (well, not butchers maybe), but NO GUNS. Use your imaginations! So they did, until somehow the firefighters, lumberjacks, race car drivers, or space explorers, were suddenly attacked by evil, hairy, giant, horrible badguy monsters, and it was on their shoulders to drive said same from the premises — with whatever weapon was handy. Was I daunted? Oh no. My new litany became, “We never shoot people. We only shoot targets.” That worked fine for about an hour, until my son announced that his sister and that bird out the window were both targets. And what the heck was a target anyway? My only solace now is

to remind myself that every man I know played shootem-up when they were (sigh) little boys. Most of them, to the best of my knowledge, somehow turned out civilized. I’m convinced now that the primal drive to go out and hunt something for supper is just too deeply imbedded in the male DNA. So, OK, OK, I’ll buy him a toy sword. Maybe even some cap pistols. But he is still going to learn to put the seat down. Jean Gillette is a freelance writer remembering when. Contact her at jean@ coastnewsgroup.com.

back to together again, followed by a bone graft from my hip to glue it all up. The doctors said my career as a stuntman was over and that I would probably never surf, snow ski, or fly my hang glider.” When all hope seemed gone, a friend introduced Thorpe to micro-current therapy where a mild and painless current travels through the body. According to Thorp, “Within a year of self-imposed physical therapy and daily treatment with Electro-Acuscope and Myopulse machines I was back in the stunt business and running marathons.” Beginning with those first treatments, Thorp worked to improve the machine and finally came up with an improved version of his own. His Electro-Equiscope sends out a tiny current but produces big results. Among the thousands who have drastically improved their lives through Thorp’s invention are football legend Darren Sproles, Hall of Fame jockey Gary

SLAVE to your hair HAVE

Stevens, Charger Brandon Oliver, and I’ll Have Another, a racehorse that defied oddsmakers when he won the 2012 Kentucky Derby. The medical profession is often resistant to treatments considered alternative, but the Equiscope is endorsed by cardiologists Stephen Sinatra and Richard Delany and psychiatrist Daniel Amen among others. Thorp keeps an office at the Thorp Institute of

Integrated Medicine in Encinitas. Hurting surfers can get more information on the Electro-Equiscope by visiting is endowww.thorpinstitute.com. Oceanographic pioneer Walter Munk passed away on Feb. 8, 2019, at the age of 101. Munk, whose many accomplishments include predicting the right moment to launch the Normandy Invasion during World War II, is widely considered the father of surf forecasting.

Thank you for your support.