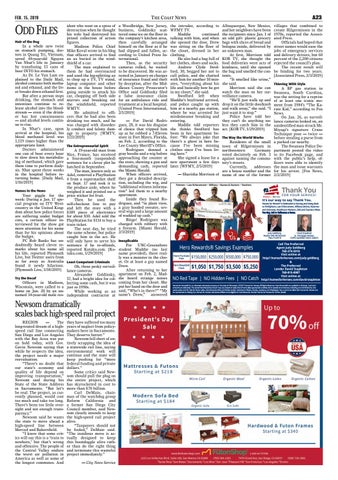 Odd Files Hair of the Dog

In a whole new twist on stomach pumping, doctors in Quang Tri, Vietnam, saved 48-year-old Nguyen Van Nhat’s life in January by transfusing 15 cans of beer INTO his stomach. As Dr. Le Van Lam explained to the Daily Mail, alcohol contains both methanol and ethanol, and the liver breaks down ethanol first. But after a person stops drinking, the stomach and intestines continue to release alcohol into the bloodstream — even if the drinker has lost consciousness — and alcohol levels continue to rise. In Nhat’s case, upon arrival at the hospital, his blood methanol level was 1,119 times higher than the appropriate limit. Doctors administered one can of beer every hour to slow down his metabolizing of methanol, which gave them time to perform dialysis. Nhat spent three weeks in the hospital before returning home. [Daily Mail, 1/16/2019]

Names in the News

Your giggle for the week: During a Jan. 17 special program on ITV Westcountry in the United Kingdom about how police forces are suffering under budget cuts, a certain officer interviewed for the show got more attention for his name than for his opinions about the budget. PC Rob Banks has undoubtedly heard clever remarks about his name all his life, reported Plymouth Live, but Twitter users from as far away as Australia found it newly hilarious. [Plymouth Live, 1/18/2019]

Officers in Madison, Wisconsin, were called to a home on Jan. 20 by an unnamed 34-year-old male res-

ident who went on a spree of destruction when he thought his wife had destroyed his prized collection of action figures. Madison Police Chief Mike Koval wrote in his blog that officers arrived to find an ax buried in the windshield of a car. The man explained to them he had overreacted and used the log-splitting ax to chop up a TV, TV stand, laptop computer and other items in the house before going outside to attack his car, chopping off both side mirrors and breaking out the windshield, reported WMTV. He admitted to officers that he had also been drinking too much, and he was charged with disorderly conduct and felony damage to property. [WMTV, 1/21/2019] The Entrepreneurial Spirit

a Woodbridge, New Jersey, business, Goldinsky scattered some ice on the floor in the company’s kitchen area, then carefully arranged himself on the floor as if he had slipped and fallen, according to United Press International. Then, as the security cameras rolled, he waited to be discovered. He was arrested in January on charges of insurance fraud and theft by deception, after the Middlesex County Prosecutor’s Office said Goldinsky filed a false insurance claim for an ambulance ride and treatment at a local hospital. [United Press International, 2/1/2019] — For David Rodriguez, 28, it was his disguise of choice that tripped him up as he robbed a 7-Eleven store in Fort Myers, Florida, on Feb. 2, according to the Lee County Sheriff’s Office. Rodriguez donned a gray hoodie and a wig before approaching the counter at the store, showing a gun and demanding cash, reported the Miami Herald. When officers arrived, they got a detailed description, including the wig, and “additional witness information” led them to a nearby apartment. Inside they found Rodriguez, and “in plain view, a gray hooded sweater, several wigs and a large amount of wadded up cash.” Bingo! Rodriguez was charged with robbery with a firearm. [Miami Herald, 2/3/2019]

A 19-year-old man from Nice, France, has received a four-month (suspended) sentence for a clever plot he hatched in September. The man, known only as Adel, removed a PlayStation 4 from a supermarket shelf on Sept. 17 and took it to the produce aisle, where he weighed it and printed out a price sticker for fruit. Then he used the self-checkout line to pay and left the store with a $389 piece of electronics for about $10. Adel sold the PlayStation for $114 to buy a train ticket. The next day, he tried the same scheme, but police caught him in the act. He will only have to serve his Inexplicable sentence if he re-offends, For UNC-Greensboro reported Kotaku.com. [Ko- student Maddie (no last taku.com, 1/29/2019] name provided), there really was a monster in the closet. Or at least a guy named Least Competent Criminals Oh, those pesky surveil- Drew. After returning to her lance cameras. Alexander Goldinsky, apartment on Feb. 2, Mad57, had a bright idea for col- die heard strange noises lecting some cash, but it was coming from her closet. She put her hand on the door and just so 1990s. While working as an said, “Who’s in there?” “My independent contractor at name’s Drew,” answered

Newsom dramatically scales back high-speed rail project REGION — The long-touted dream of a highspeed rail line connecting San Diego and Los Angeles with the Bay Area was put on hold today, with Gov. Gavin Newsom saying that while he respects the idea, the project needs a major reevaluation. “There’s no doubt that our state’s economy and quality of life depend on improving transportation,’’ Newsom said during his State of the State Address in Sacramento. “But let’s be real. The project, as currently planned, would cost too much and take too long. There’s been too little oversight and not enough transparency.” Newsom said he wants the state to move ahead a high-speed line between Merced and Bakersfield. “I know that some critics will say this is a ‘train to nowhere,’ but that’s wrong and offensive. The people of the Central Valley endure the worst air pollution in America as well as some of the longest commutes. And

they have suffered too many years of neglect from policymakers here in Sacramento. They deserve better.’’ Newsom fell short of entirely scrapping the idea of a statewide rail line, saying environmental work will continue and the state will keep pushing for “more federal funding and private dollars.’’ Some critics said Newsom should pull the plug on the entire project, which has skyrocketed in cost to more than $70 billion. Carl DeMaio, chairman of the watchdog group Reform California and a former San Diego City Council member, said Newsom clearly intends to keep the high-speed rail project alive. “Taxpayers should not be fooled,” DeMaio said. “The insidious move is actually designed to keep this boondoggle alive rather than do the right thing and terminate this wasteful project immediately.’’ — City News Service

the intruder, according to WFMY TV. Maddie continued talking with him, and when she opened the door, Drew was sitting on the floor of the closet, dressed in her clothing. He also had a bag full of her clothes, shoes and socks. Andrew Clyde Swofford, 30, begged her not to call police, and she chatted with him for another 10 minutes, “everything about his life and basically how he got in my closet,” she said. Swofford left when Maddie’s boyfriend arrived, and police caught up with him at a nearby gas station, where he was arrested for misdemeanor breaking and entering. Maddie told reporters she thinks Swofford has been in her apartment before: “We always joke that there’s a ghost in here because I’ve been missing clothes since I’ve been living here.” She signed a lease for a new apartment a few days later. [WFMY, 2/5/2019]

Albuquerque, New Mexico, and her neighbors have been the recipients since Jan. 1 of an odd gift: plastic grocery bags with slices of bread and bologna inside, delivered by an unknown man. At first, Morrison told KOB TV, she thought the food deliveries were acts of kindness, until she opened the bag and smelled the contents. “It smelled like urine,” she said. Morrison said she can watch the man on her surveillance camera. “He’ll just walk up and drop it on the little doorknob and walk away,” she said. “I just want it to stop.” Police have told her they can’t do anything unless they catch him in the act. [KOB TV, 1/29/2019] The Way the World Works

Residents of the small town of Hilgermissen in northwestern Germany voted decisively on Feb. 3 against naming the community’s streets. Currently, addresses are a house number and the — Sharisha Morrison of name of one of the former

villages that combined to create Hilgermissen in the 1970s, reported the Associated Press. Officials had hoped that street names would ease the jobs of emergency services and delivery drivers, but 60 percent of the 2,200 citizens rejected the council’s plan. The recent result will be binding for two years. [Associated Press, 2/3/2019] Thieving With Style

A BP gas station in Swansea, South Carolina, was the setting for a reprise of at least one iconic moment from 1984’s “The Karate Kid,” according to Fox News. On Jan. 26, as surveillance cameras looked on, an unidentified man struck Mr. Miyagi’s signature Crane Technique pose — twice — before stealing a purse from a parked car nearby. The Swansea Police Department posted the video to its Facebook page, and with the public’s help, officers were able to identify the man and issue warrants for his arrest. [Fox News, 2/2/2019]

Thank You FOR YOUR SERVICE!

F O R Y OisUDedicated R SERVICE! Homes for Heroes® to our Serving and Back toYou. It’s way toGiving say Thank Homes Heroes® is Dedicated Homes for Heroesfor isLaw Dedicated to Serving and Giving Back Firefighters, Enforcement, to Serving and Giving Back to Reserves to Firefighters, Law Enforcement, Military (Active, Military (Active, Reserves and and Veterans), Healthcare Workers, EMS and Teachers When Firefighters, Law Enforcement, You Buy, Sell or Refinance a Home. Veterans), Healthcare Workers, Military (Active, Reserves and Veterans), Healthcare EMS and Teachers WhenWorkers, You EMS Teachers When You Buy, Selland or Refinance a Home. Buy, Sell or Refinance a Home. ®

“Great experience! Would definitely recommend! I will $1,050 $1,750 $3,500 $5,250 http//:homesforheroes.com/judy-goldberg &amp;for allmade always goHomes to Homes for Heroes my real “The for Heroes program meestate feel like my

sacrifices to my community and my country were worth needs!” - Patricia

it. That there was somebody there, to tell me, thank you for your service and shaking my hand.” - Cinda

Visit online atme, thank you it. That there was somebody there, to tell Call Judy Goldberg, TODAY for more DETAIS 760-274-5910 for your service and shaking my hand.” - Cinda http//:homesforheroes.com/david-stapleton or Visit us on line at: http://www.homesforheroes.com/affiliate/judy-goldberg

NO Red Tape | NO Hidden Fees | NO Catch

or Visit us on line