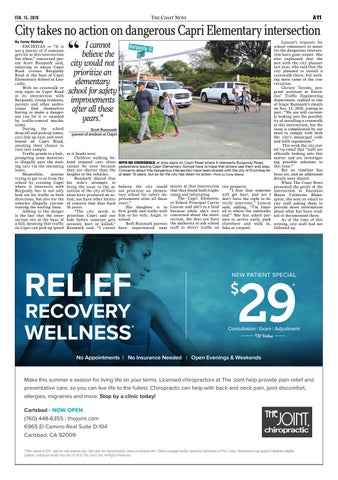 ENCINITAS — “It is not a matter of if someone gets hit at this intersection but when,” concerned parent Scott Runmark said, referring to where Capri Road crosses Burgundy Road at the base of Capri Elementary School in Leucadia. With no crosswalk or stop signs on Capri Road at its intersection with Burgundy, young students, parents and other pedestrians find themselves having to make a dangerous run for it — unaided by traffic-control mechanisms. During the school drop-off and pick-up times, cars line up east- and westbound on Capri Road, awaiting their chance to turn into campus. Traffic grinds to a halt, prompting some motorists to illegally pass the waiting cars via the oncoming lanes. Meanwhile, anyone trying to get to or from the school by crossing Capri where it intersects with Burgundy has to not only look out for traffic in both directions, but also for the vehicles illegally circumventing the waiting lines. Adding to the danger is the fact that the intersection sits at the base of a hill, meaning that traffic on Capri can pick up speed

I cannot believe the city would not prioritize an elementary school for safety improvements after all these years.” Scott Runmark parent of student at Capri

as it heads west. Children walking behind stopped cars often cannot be seen because they are shorter than the heights of the vehicles. Runmark shared that his wife’s attempts to bring the issue to the attention of the city of Encinitas have produced no action, nor have other letters of concern that date back 16 years. “The city needs to prioritize Capri and our kids before someone gets severely hurt or killed,” Runmark said. “I cannot

WITH NO CROSSWALK or stop signs on Capri Road where it intersects Burgundy Road, pedestrians leaving Capri Elementary School have to hope that drivers see them and stop. Concerns about this dangerous intersection have been shared with the city of Encinitas for at least 16 years, but so far the city has taken no action. Photo by Carey Blakely

believe the city would not prioritize an elementary school for safety improvements after all these years.” His daughter is in first grade and walks with him or his wife, Angie, to school. Both Runmark parents have experienced near

misses at that intersection that they found both frightening and infuriating. The Capri Elementary School Principal Carrie Lancon said she’s in a bind because while she’s very concerned about the intersection, she does not have the authority to ask school staff to direct traffic on

city property. “I fear that someone will get hurt, and yet I don’t have the right to directly intervene,” Lancon said, adding, “I’m limited to where the sidewalks end.” She has asked parents to arrive early, park elsewhere and walk in, bike or carpool.

Lancon’s requests for school volunteers to monitor the dangerous intersection have gone unmet. She also explained that she met with the city planner last year, who said that the city planned to install a crosswalk there, but nothing more came of the conversation. Christy Tersolo, program assistant at Encinitas’ Traffic Engineering department, replied to one of Angie Runmark’s emails on Nov. 13, 2018, stating in part, “We are still currently looking into the possibility of installing a crosswalk at this intersection, but the issue is complicated by our need to comply with both the city’s municipal code and ADA regulations.” This week the city stated via email that “staff are officially looking into this matter and are investigating possible solutions to this issue.” But no timeline has been set, and no additional details were shared. When The Coast News presented the perils of the intersection to Encinitas Mayor Catherine Blakespear, she sent an email to city staff asking them to provide more information about what has been studied or documented there. As of the time of this writing, city staff had not followed up.

Make this summer a season for living life on your terms. Licensed chiropractors at The Joint help provide pain relief and preventative care, so you can live life to the fullest. Chiropractic can help with back and neck pain, joint discomfort, allergies, migraines and more. Stop by a clinic today! Carlsbad - NOW OPEN (760) 448-6355 | thejoint.com 6965 El Camino Real Suite D-104 Carlsbad, CA 92009 *Offer valued at $39. Valid for new patients only. See clinic for chiropractor(s)’ name and license info. Clinics managed and/or owned by franchisee or Prof. Corps. Restrictions may apply to Medicare eligible patients. Individual results may vary. © 2019 The Joint Corp. All Rights Reserved.