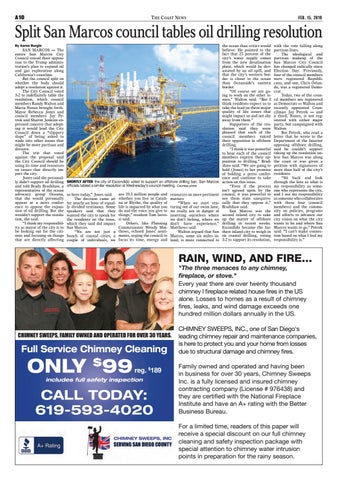 SAN MARCOS — The entire San Marcos City Council voiced their opposition to the Trump administration’s plan to expand oil and gas exploration along California’s coastline. But the council split on whether the body should adopt a resolution against it. The City Council voted 3-2 to indefinitely table the resolution, which council members Randy Walton and Maria Nunez brought forth. Mayor Rebecca Jones and council members Jay Petrek and Sharon Jenkins expressed concern that adopting it would lead the City Council down a “slippery slope” of being asked to wade into other issues that might be more partisan and divisive. The trio that voted against the proposal said the City Council should be using its time and resources on issues that directly impact the city. Jones said she personally didn’t support oil drilling and told Brady Bradshaw, a representative of the ocean advocacy group Oceana, that she would personally appear at a news conference to oppose the expansion of oil drilling. But she wouldn’t support the resolution, she said. “I think my responsibility as mayor of the city is to be looking out for the citizens and focusing on things that are directly affecting

us here today,” Jones said. The decision came after nearly an hour of equally divided testimony. Some speakers said that they wanted the city to speak for the residents on the issue, which they said did impact San Marcos. “We are not just a bunch of coastal cities, a couple of individuals, we

are 39.5 million people and whether you live in Catalina or Blythe, the quality of life is impacted by what you do and the voice you give to things,” resident Tom Iarossi said. Others, like Planning Commissioner Wendy Matthews, echoed Jones’ sentiments, urging the council to focus its time, energy and

resources on more pertinent matters “When we start venturing out of our swim lane, we really are in danger of inserting ourselves where we don’t belong, where we don’t have experience,” Matthews said. Walton argued that San Marcos, some six miles inland, is more connected to

the ocean than critics would believe. He pointed to the fact that 25 percent of the city’s water supply comes from the new desalination plant, which would be devastated by an oil spill, and that the city’s western border is closer to the ocean than Oceanside’s eastern border. “Of course we are going to work on the other issues,” Walton said. “But I think residents expect us to take the lead on these major quality of life issues that might impact us and not shy away from them.” Supporters of the resolution said they were pleased that each of the council members voiced their opposition in offshore drilling. “I think it was powerful to hear each of the council members express their opposition to drilling,” Bradshaw said. “We are going to hold (Jones) to her promise of holding a press conference and continue to take action on this issue. “Even if the process isn’t agreed upon by the council, it was powerful to see them state unequivocally that they oppose it,” Bradshaw said. San Marcos was the second inland city to take up the matter of offshore drilling in recent weeks. Escondido became the farthest inland city to weigh in on coastal drilling, voting 3-2 to support its resolution,

with the vote falling along partisan lines. The ideological and partisan makeup of the San Marcos City Council has changed radically since Election Day. Previously, four of the council members were registered Republicans, and one, Chris Orlando, was a registered Democrat. Today, two of the council members are registered as Democrats — Walton and recently appointed Councilman Jay Petrek — and a third, Nunez, is not registered with either major party, but campaigned with Walton. But Petrek, who read a letter that he wrote to the Department of the Interior opposing offshore drilling, said he couldn’t support taking up the resolution unless San Marcos was along the coast or was given a petition with signatures of more than half of the city’s residents. “Sit back and look through the lens as what is my responsibility as someone who represents the city, and I see my responsibility as someone who collaborates with these four (council members) and the community on policies, programs and efforts to advance our city vision on what the city wants to be and where San Marcos wants to go,” Petrek said. “I can’t make connection based on what I feel my responsibility is.”

RAIN, WIND, AND FIRE... &quot;The three menaces to any chimney, fireplace, or stove.&quot; Every year there are over twenty thousand chimney I fireplace related house fires in the US alone. Losses to homes as a result of chimney fires, leaks, and wind damage exceeds one hundred million dollars annually in the US. CHIMNEY SWEEPS, FAMILY OWNED AND OPERATED FOR OVER 30 YEARS.

CHIMNEY SWEEPS, INC., one of San Diego&#39;s leading chimney repair and maintenance companies, is here to protect you and your home from losses due to structural damage and chimney fires. Family owned and operated and having been in business for over 30 years, Chimney Sweeps Inc. is a fully licensed and insured chimney contracting company (License # 976438) and they are certified with the National Fireplace Institute and have an A+ rating with the Better Business Bureau. For a limited time, readers of this paper will receive a special discount on our full chimney cleaning and safety inspection package with special attention to chimney water intrusion points in preparation for the rainy season.