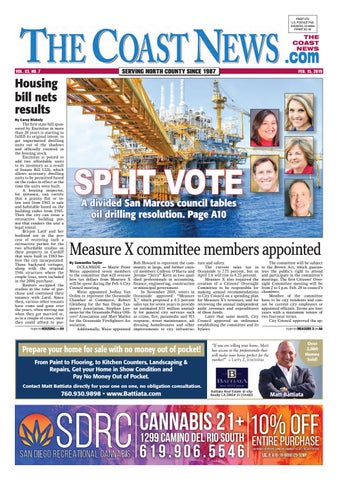 The first state bill sponsored by Encinitas in more than 20 years is starting to fulfill its original intent: to get unpermitted dwelling units out of the shadows and officially counted in the housing stock. Encinitas is poised to add two affordable units to its inventory as a result of Senate Bill 1226, which allows accessory dwelling units to be permitted based on the codes in effect at the time the units were built. A housing inspector, for instance, can certify that a granny flat or inlaw unit from 1965 is safe and habitable based on the building codes from 1965. Then the city can issue a retroactive building permit that renders the unit a legal rental. Brisjon Latif and her husband are in the process of receiving such a retroactive permit for the two affordable studios on their property in Cardiff that were built in 1983 before the city incorporated. Those backyard cottages, along with the original 1946 structure where the couple lives, were included in the 2006 purchase. Renters occupied the studios at the time of purchase and continued their tenancy with Latif. Since then, various other tenants have come and gone over the years, often moving out when they got married or, as in a couple of cases, once they could afford to purTURN TO HOUSING ON A9

ture and safety. The current sales tax in Oceanside is 7.75 percent, but on April 1 it will rise to 8.25 percent. Measure X also required the creation of a Citizens’ Oversight Committee to be responsible for making annual recommendations to City Council on a spending plan for Measure X’s revenues, and for reviewing the annual independent audit revenues and expenditures of those funds. Later that same month, City Council approved an ordinance establishing the committee and its bylaws.

Prepare your home for sale with no money out of pocket! From Paint to Flooring, to Kitchen Counters, Landscaping &amp; Repairs, Get your Home in Show Condition and Pay No Money Out of Pocket.

The committee will be subject to the Brown Act, which guarantees the public’s right to attend and participate in the committee’s meetings. The first Citizens’ Oversight Committee meeting will be from 2 to 5 p.m. Feb. 28 in council’s chambers. Member of the committee have to be city residents and cannot be current city employees or appointed officials. Terms are four years with a maximum tenure of two four-year terms. City Council approved the apTURN TO MEASURE X ON A8

“If you are selling your home, Matt has access to the professionals that will make your home perfect for the market!” — Larry Z, Encinitas

Contact Matt Battiata directly for your one on one, no obligation consultation.