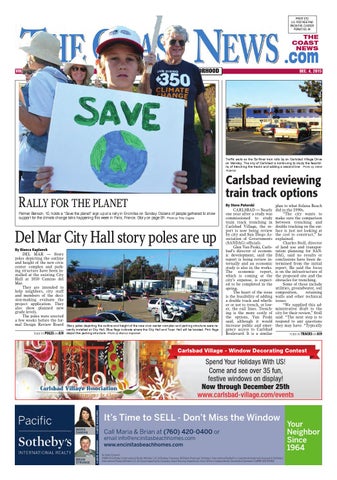 .com Traffic waits as the Surfliner train rolls by on Carlsbad Village Drive on Monday. The city of Carlsbad is continuing to study the feasibility of trenching the tracks and adding a second line. Photo by Steve

Rally for the planet Palmer Benson, 10, holds a “Save the planet” sign up at a rally in Encinitas on Sunday. Dozens of people gathered to show support for the climate change talks happening this week in Paris, France. Story on page B1. Photo by Tony Cagala

TURN TO POLES ON A19

CARLSBAD — Nearly one year after a study was commissioned to study train track trenching in Carlsbad Village, the report is now being review by city and San Diego Association of Governments (SANDAG) officials. Glen Van Peski, Carlsbad’s director of economic development, said the report is being review internally and an economic study is also in the works. The economic report, which is coming at the city’s expense, is expected to be completed in the spring. The heart of the issue is the feasibility of adding a double track and whether or not to trench, or lower, the rail lines. Trenching is the more costly of the options, Van Peski said, although it would increase public and emergency access to Carlsbad Boulevard. It is a similar

plan to what Solana Beach did in the 1990s. “The city wants to make sure the comparison between trenching and double tracking on the surface is just not looking at the cost to construct,” he explained. Charles Stoll, director of land use and transportation planning for SANDAG, said no results or conclusions have been determined from the initial report. He said the focus is on the infrastructure of the proposed site and the obstacles for trenching. Some of those include utilities, groundwater, soil composition, retaining walls and other technical issues. “We supplied this administrative draft to the city for their review,” Stoll said. “The next step is to respond to any questions they may have. “Typically

TURN TO TRACKS ON A19