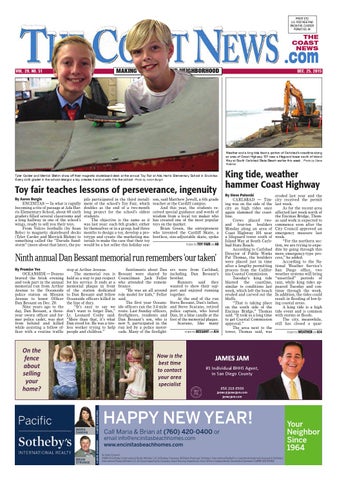 Weather and a king tide blast a portion of Carlsbad’s coastline along an area of Coast Highway 101 near a lifeguard tower south of Island Way at South Carlsbad State Beach earlier this week. Photo by Steve Puterski

Tyler Carder and Merrick Blehm show off their magnetic skateboard deck at the annual Toy Fair at Ada Harris Elementary School in Encinitas. Every sixth grader in the school designs a toy, creates it and unveils it to the school. Photo by Aaron Burgin

ENCINITAS — In what is rapidly becoming a rite of passage at Ada Harris Elementary School, about 60 sixth graders filled several classrooms and a long hallway in one of the school’s wings, ready to sell you their toys. From Velcro footballs (by Sean Bobo) to magnetic skateboard decks (Tyler Carder and Merrick Blehm) to something called the “Darude Sandstorm” (more about that later), the pu-

pils participated in the third installment of the school’s Toy Fair, which doubles as the end of a two-month long project for the school’s oldest students. The objective is the same as it was last year: each 6th grader, either by themselves or in a group, had three months to design a toy, develop a prototype and create the marketing materials to make the case that their toy would be a hot seller this holiday sea-

son, said Matthew Jewell, a 6th grade teacher at the Cardiff campus. And this year, the students received special guidance and words of wisdom from a local toy maker who has created one of the most popular toys on the market. Brian Green, the entrepreneur who invented the Cardiff Skate, a bootless, size-adjustable skate, spoke TURN TO TOY FAIR ON A8

OCEANSIDE — Dozens braved the brisk evening and took part in the annual memorial run from Arthur Avenue to the Oceanside police station on Mission Avenue to honor Officer Dan Bessant on Dec. 20. Nine years ago to the day, Dan Bessant, a threeyear sworn officer and former police cadet, was shot from behind and killed while assisting a fellow officer with a routine traffic

stop at Arthur Avenue. The memorial run is held as a way to pay respect for his service. It ends at a memorial plaque in front of the station dedicated to Dan Bessant and fellow Oceanside officers killed in the line of duty. “It’s easy to say we don’t want to forget Dan,” Lt. Leonard Cosby said. “More than that, it’s what Dan stood for. He was a tireless worker trying to help people and children.”

Sentiments about Dan Bessant were shared by Councilman Jack Feller who attended the remembrance. “He was an all around role model for kids,” Feller said. The first year Oceanside officers ran the 3.4-mile route. Last Sunday officers, firefighters, residents and Dan Bessant’s son, who is now 9, participated in the run led by a police motorcade. Many of the firefight-

ers were from Carlsbad, including Dan Bessant’s brother. Runners said they wanted to show their support and enjoyed running together. At the end of the run Steve Bessant, Dan’s father, and Steve Scarano, retired police captain, who hired Dan, lit a blue candle at the foot of the memorial plaque. Scarano, like many TURN TO BESSANT ON A14

CARLSBAD — Timing was on the side of the city as high tides once again slammed the coastline. Crews placed twoand four-ton boulders Monday along an area of Coast Highway 101 near a lifeguard tower south of Island Way at South Carlsbad State Beach. According to Carlsbad Director of Public Works Pat Thomas, the boulders were placed just in time after a lengthy permitting process from the California Coastal Commission. Tuesday’s king tide blasted the coastline, similar to conditions last week, which left the beach eroded and carved out the bluffs. “That is taking place on the south side of the Encinas Bridge,” Thomas said. “It took us a long time to get Coastal Commission approval.” The area next to the tower, Thomas said, was

eroded last year and the city received the permit last week. As for the recent area affected last week north of the Encinas Bridge, Thomas said work is expected to commence soon after the City Council approved an emergency measure last week. “For the northern section, we are trying to expedite by going through this more emergency-type process,” he added. According to the National Weather Service’s San Diego office, two weather systems will bring “unsettled” periods of rain, while king tides appeared Tuesday and continue through the week. In addition, the tides could result in flooding of low-lying coastal areas. A king tide is a high tide event and is common with storms or floods. The city, meanwhile, still has closed a quarTURN TO WEATHER ON A14