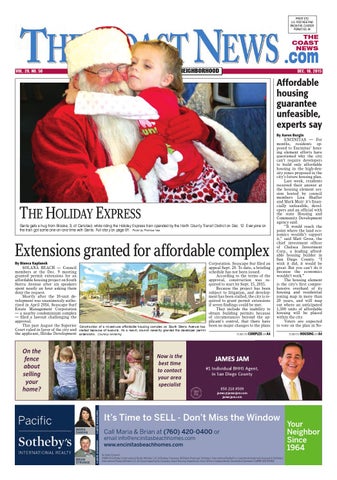 Corporation. Seascape Sur filed an appeal Sept. 28. To date, a briefing schedule has not been issued. According to the terms of the approval, construction was required to start by Sept. 15, 2015. Because the project has been subject to litigation, and development has been stalled, the city is required to grant permit extensions if seven findings could be met. They include the inability to obtain building permits because of circumstances beyond the applicant’s control, that there have been no major changes to the plans

ENCINITAS — For months, residents opposed to Encinitas’ housing element efforts have questioned why the city can’t require developers to build only affordable housing in the high-density zones proposed in the city’s future housing plan. Last week, residents RANCHO received their answer at SFNEWS the housing element session hosted by council members Lisa Shaffer and Mark Muir: it’s financially unfeasible, developers and an official with the state Housing and Community Development agency said. “It would reach the point where the land economics wouldn’t support it,” said Matt Grosz, the chief investment officer of Chelsea Investment Corp., a leading affordable housing builder in San Diego County. “I wish it did, it would be great. But you can’t do it because the economics wouldn’t work.” The housing element is the city’s first comprehensive overhaul of its housing and residential zoning map in more than 20 years, and will map out where an anticipated 1,300 units of affordable housing will be placed within the city. Voters are expected to vote on the plan in No-

TURN TO COMPLEX ON A4

TURN TO HOUSING ON A4

The Holiday Express Santa gets a hug from Brooke, 3, of Carlsbad, while riding the Holiday Express train operated by the North County Transit District on Dec. 12. Everyone on the train got some one-on-one time with Santa. Full story on page B1. Photo by Promise Yee

SOLANA BEACH — Council members at the Dec. 9 meeting granted permit extensions for an affordable housing project on South Sierra Avenue after six speakers spent nearly an hour asking them deny the request. Shortly after the 10-unit development was unanimously authorized in April 2014, Seascape Surf Estate Management Corporation — a nearby condominium complex — filed a lawsuit challenging the approval. This past August the Superior Construction of a mixed-use affordable housing complex on South Sierra Avenue has Court ruled in favor of the city and stalled because of lawsuits. As a result, council recently granted the developer permit the applicant, Hitzke Development extensions. Courtesy rendering