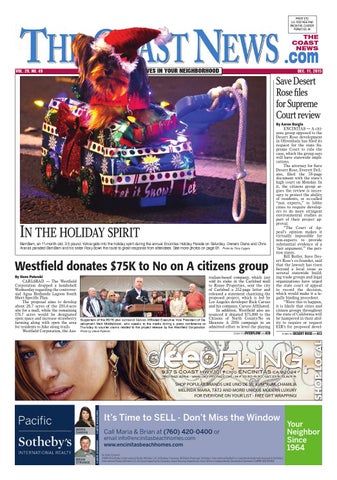 tralian-based company, which just sold its stake in the Carlsbad mall to Rouse Properties, sent the city of Carlsbad a 252-page letter and released a statement chastising the proposed project, which is led by Los Angeles developer Rick Caruso and his company, Caruso Affiliated. In addition, Westfield also announced it donated $75,000 to the Citizens of North County/No on Measure A 2016 campaign in an admitted effort to level the playing

ENCINITAS — A citiVISTA zens group opposed to the Desert Rose NEWS development in Olivenhain has filed its request for the state Supreme Court to rule the case, which the group says will have statewide implications. The attorney for Save Desert Rose, Everett DeLano, filed the 58-page document with the state’s high RANCHO court on Monday. In it, the citizens group arSFNEWS gues the review is necessary to protect the ability of residents, or so-called “non experts,” to lobby cities to require developers to do more stringent environmental studies as part of their project approval. “The Court of Appeal’s opinion makes it virtually impossible for non-experts to provide substantial evidence of a ‘fair argument,’” the petition states. Bill Butler, Save Desert Rose’s co-founder, said that the lawsuit has risen beyond a local issue as several statewide building trade groups and legal organizations have urged the state court of appeal to record the decision, which would make it a legally binding precedent. “Were this to happen, it is likely that cities and citizen groups throughout the state of California will be hampered in their ability to require or request EIR’s for proposed devel-

TURN TO OVERFLOW ON A18

TURN TO DESERT ROSE ON A12

In the holiday spirit BamBam, an 11-month-old, 3.5 pound Yorkie gets into the holiday spirit during the annual Encinitas Holiday Parade on Saturday. Owners Diana and Chris Aranas paraded BamBam and his sister Roxy down the route to great response from attendees. See more photos on page B1. Photo by Tony Cagala

CARLSBAD — The Westfield Corporation dropped a bombshell Wednesday regarding the controversial Agua Hedionda Lagoon South Short Specific Plan. The proposal aims to develop about 26.7 acres of the 203.4-acre site for a mall, while the remaining 176.7 acres would be designated open space and increase strawberry Supporters of the 85/15 plan surround Caruso Affiliated Executive Vice President of Defarming along with open the area velopment Matt Middlebrook, who speaks to the media during a press conference on for residents to hike along trails. Thursday to counter claims related to the project release by the Westfield Corporation. Westfield Corporation, the Aus- Photo by Steve Puterski