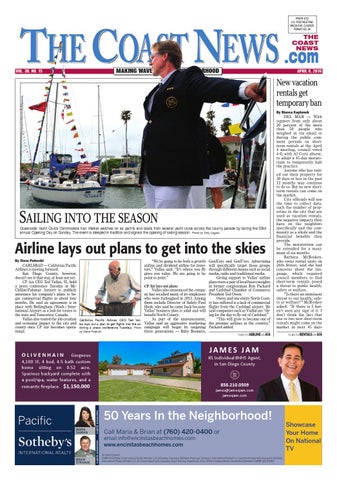 GenX’ers and GenY’ers. Advertising will specifically target those groups through different means such as social media, radio and traditional media. Giving support to Vallas’ airline plans were a pair of local heavyweights in former congressman Ron Packard and Carlsbad Chamber of Commerce President Ted Owen. Owen said one entity North County has suffered is a lack of commercial flights from the Carlsbad airport. He said companies such as ViaSat are “dying for the day to fly out of Carlsbad.” “This will grow to become one of the premier airlines in the country,” Packard added.

DEL MAR — With support from only about THE 20 percent of the more than 50 people who VISTA weighed in via email or during the NEWS public comment periods on shortterm rentals at the April 4 meeting, council voted 4-0, with Al Corti absent, to adopt a 45-day moratorium to temporarily halt the practice. Anyone who has rented out their property for 30 days or less in the past RANCHO 12 months may continue to do SFNEWS so. But no new shortterm rentals can come on the market. City officials will use the time to collect data, such the number of properties in the city that are used as vacation rentals, the negative impacts they have on the neighbors specifically and the community as a whole and the financial benefits they provide. The moratorium can be extended for a maximum of six months. Barbara McRoskey, who owns rental units on 26th Street, said she had concerns about the language, which required council members to find short-term rentals posed a threat to public health, safety or welfare. “Is there an imminent threat to our health, safety or welfare?” McRoskey asked. “If there is I haven’t seen any sign of it. I don’t think the fact that one or two new short-term rentals might come on the market in next 45 days

TURN TO AIRLINE ON A16

TURN TO RENTALS ON A16

Sailing into the season

Oceanside Yacht Club’s Commodore Karl Walker watches on as yachts and boats from several yacht clubs across the county parade by during the 53rd annual Opening Day on Sunday. The event is steeped in tradition and signals the opening of sailing season. Photo by Tony Cagala

CARLSBAD — California Pacific Airlines is moving forward. San Diego County, however, doesn’t see it that way, at least not yet. CP Air CEO Ted Vallas, 95, held a press conference Tuesday at McClellan-Palomar Airport to publicly announce his company’s plans to begin commercial flights in about four months. He said an agreement is in place with Bellingham (Wash.) International Airport as a hub for routes to the state and Vancouver, Canada. Vallas also touted the job creation California Pacific Airlines CEO Ted Valand economic impact to the city and las lays out a plan to get flights into the air county once CP Air becomes opera- during a press conference Tuesday. Photo by Steve Puterski tional.

“We’re going to be both a growth airline and dividend airline for investors,” Vallas said. “It’s where you fly gives you value. We are going to be point to point.” CP Air lays out plans Vallas also announced the company has recalled many of its employees who were furloughed in 2013. Among them include Director of Safety Paul Hook, who said he came back because Vallas’ business plan is solid and will benefit North County. As part of the announcement, Vallas said an aggressive marketing campaign will begin by targeting three generations — Baby Boomers,