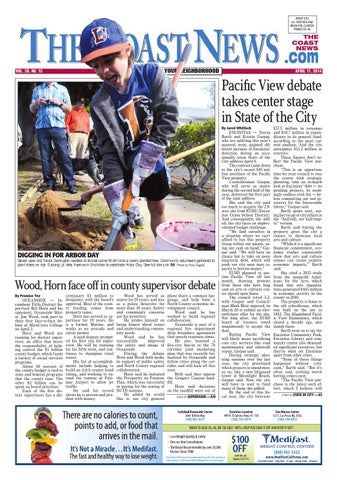 DIGGING IN FOR ARBOR DAY

OCEANSIDE — Incumbent Fifth District Supervisor Bill Horn and his opponent, Oceanside Mayor Jim Wood, took part in their first face-to-face debate at MiraCosta College on April 3. Horn and Wood are running for district supervisor, an office that bears the responsibility of helping control the $5 billion county budget, which funds a variety of social services programs. About 80 percent of the county budget is tied to state and federal programs that the county runs. The other $2 billion can be spent on board priorities. Each of the five district supervisors has a dis-

cretionary $1 million to designate, with the board’s approval. Most of the county funding comes from property taxes. Horn has served as supervisor for 19 years. He is a former Marine, and works as an avocado and citrus farmer. A land dispute prompted his first run for supervisor. He will be running for his fifth term, and continues to champion rural issues. His list of accomplishments include helping to build an AAA county bond rating, and working to extend the runway at Palomar Airport to allow jet traffic. He said his record shows he is proven and prudent with money.

Wood has served as mayor for 10 years, and was as a police detective for more than 30 years. Safety and community concerns are his priorities. He prides himself on being honest about issues and understanding community needs. Wood said he has successfully improved the safety and image of Oceanside. During the debate Horn and Wood both spoke in support of public safety and North County regional collaboration. Horn said he initiated the Prosperity on Purpose Plan, which was successful in paying for the zoning of NCTD stations. He added he would like to see city general

plans share a common language, and help form a North County economic development council. Wood said he has worked to build regional collaboration. Oceanside is part of a regional fire department drop boundary agreement that speeds response times. He also boasted a five-city buy-in to the 78 corridor joint marketing plan that was recently formalized by Oceanside and fellow cities along the corridor, and will kick off this year. Both said they oppose the Gregory Canyon landfill. Horn said decisions on the landfill were out of TURN TO SUPERVISOR ON A19

ENCINITAS — Teresa Barth and Kristin Gaspar, who are splitting this year’s mayoral term, painted different pictures of Encinitas’ direction during an occasionally tense State of the City address April 4. The contrast came down to the city’s recent $10 million purchase of the Pacific View property. Councilwoman Gaspar, who will serve as mayor during the second half of the year, delivered the first part of the joint address. She said the city paid too much to acquire the 2.8acre site from EUSD (Encinitas Union School District). And consequently, she added, the city faces an unprecedented budget challenge. “We find ourselves in a situation where we can’t afford to buy this property living within our means, using our cash on hand,” Gaspar said. “We will have no choice but to take on more long-term debt, which will push our city near max capacity to borrow money.” EUSD planned to auction Pacific View off last month, drawing protests from those who have long said an arts or cultural center should open there. The council voted 3-2, with Gaspar and Councilman Mark Muir opposed, on March 20 to submit an eleventh-hour offer for the site. Not long after, the EUSD board of trustees voted unanimously to accept the deal. Buying Pacific View will likely mean sacrificing core city services like road maintenance and sidewalk repair, Gaspar said. During strategic planning sessions over the last year, the city prioritized which projects to spend money on, like a new lifeguard tower at Moonlight Beach, Gaspar said. Now, the city will have to wait to fund many of them, she added. By the end of this fiscal year, the city forecasts

$57.5 million VISTA in revenues and $58.7 million in expenditures in its NEWS general fund, according to the most current analysis. And the city anticipates $11.2 million in reserves. Those figures don’t reflect the Pacific View purchase. “This is an opportune time for your council to stay the course with strategic planning, take an in-depth RANCHO look at Encinitas’ debt — its SFNEWS pending projects, its seemingly endless wish list — before committing our last resources for the foreseeable future,” Gaspar said. Barth spoke next, saying her recap of city affairs is the “hall-full, not half-empty” version. Barth said buying the property gives the city a chance to showcase local arts and culture. “While it is a significant financial commitment, economic studies consistently show that arts and culture venues can create positive economic impacts,” Barth said. She cited a 2012 study from the nonprofit Americans for the Arts, which found that arts organizations generated $665 million in economic activity in the county in 2010. The property is home to the old schoolhouse, which was built on the site in 1883. The dilapidated Pacific View Elementary, which closed a decade ago, also stands there. Barth went on to say the Encinitas Community Park, Encinitas Library and community center also demanded significant resources, but they’re what set Encinitas apart from other cities. “None of these things happened without criticism,” Barth said. “But it’s often said, nothing worth having comes easy. “The Pacific View purchase is the latest such effort, which I believe will

TURN TO STATE OF CITY ON A3 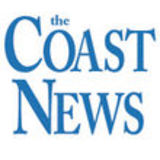