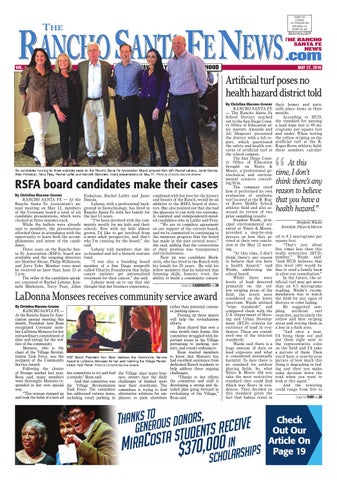 RSFA board candidates make their cases By Christina Macone-Greene

RANCHO SANTA FE — At the Rancho Santa Fe Association’s annual meeting on May 12, members of the Covenant heard a total of six candidate presentations, which were clocked at three minutes each. While the ballots were already sent to members, the presentations afforded those in attendance with the opportunity to learn both the accomplishments and intent of the candidates. Three seats on the Rancho Santa Fe Association (RSFA) board are available and the outgoing directors are Heather Slosar, Philip Wilkinson, and Jerry Yahr. Member votes must be received no later than June 13 at 5 p.m. The order of the candidate speakers consisted of Rachel Leheny, Kenneth Markstein, Terry Peay, Allen

Finkelson, Rachel Laffer and Janet Danola. Leheny, with a professional background in biotechnology, has lived in Rancho Santa Fe with her family for the last 13 years. “I’ve been involved with the community mostly for my kids and their schools. Now with my kids almost grown, I’d like to get involved from a more adult perspective, and that’s why I’m running for the board,” she said. Leheny told members that she co-founded and led a biotech venture fund. “I was also a founding board member of a San Diego nonprofit called Clearity Foundation that helps cancer patients get personalized treatment for their cancer,” she said. Leheny went on to say that she thought that her business experience,

combined with her love for the history and beauty of the Ranch, would be an additive to the RSFA board of directors. She also pointed out that she had the pleasure to run with two extremely talented and independently-minded candidates who in Laffer and Peay. “We are in complete agreement on our support of the current board, and we’re committed to continuing to the immense progress that the board has made in the past several years,” she said, adding that the cornerstone of their position was transparency and inclusiveness. Next up was candidate Markstein, who has lived in the Ranch with his family for 29 years. He told his fellow members that he believed that listening skills, honesty, trust, the ability to build a community consenTURN TO CANDIDATES ON 20

RANCHO SANTA FE — At the Rancho Santa Fe Association annual meeting this month, President Ann Boon recognized Covenant member LaDonna Monsees for her extraordinary commitment of time and energy for the welfare of the community. Monsees, who is the chair of the Village Revitalization Task Force, was the recipient of the Community Service Award. Following the closure of Stumps market last year, Boon said, many members were distraught. Monsees responded in her own special way. “This woman stepped up and took the helm of a new ad

hoc committee to try and find a remedy,” Boon said. And that committee was the Village Revitalization Task Force. The committee has addressed various items, including retail parking in

the Village since many business owners face the daily challenges of limited spots near their storefronts. The committee is trying to find alternative solutions for employees to park elsewhere

rather than potential customer parking spaces. Freeing up these spaces will help the revitalization efforts. Boon shared that over a nine month time frame, this committee struggled with important issues in the Village pertaining to parking, permits, and county ordinances. Boon wanted members to know that Monsees has had excellent assistance from dedicated Ranch residents to help address these ongoing challenges. “Thanks to her efforts the committee and staff is developing a strong and detailed plan going forward in revitalizing of the Village,” Boon said.

RANCHO SANTA FE — The Rancho Santa Fe School District reached out to the San Diego County Office of Education after parents Amanda and Ali Shapouri presented the district with a lab report, which questioned the safety and health concerns of artificial turf at the school campus. The San Diego County Office of Education brought on Ninyo &amp; Moore, a professional geotechnical and environmental sciences consulting firm. The company cited how it performed its own evaluation of synthetic turf located at the R. Roger Rowe Middle School athletic field and also assessed its review of two prior sampling results. Stephen Waide, principal environmental scientist at Ninyo &amp; Moore, provided a step-by-step process on how they arrived at their own conclusion at the May 12 meeting. “At this time, I don’t think there’s any reason to believe that you have a health hazard,” said Waide, addressing the school board. While there were levels of lead detected primarily on the yellow striping areas of the field, the levels were considered on the lower spectrum. Waide utilized “wipe standards” and compared them with the U.S. Department of Housing and Urban Development (HUD) criteria for existence of lead in residences. These are considered one of the strictest standards. Waide said there is a huge amount of data on lead exposure and what is considered potentially harmful. To date there is no standard for outdoor playing fields. So, what Ninyo &amp; Moore did was take the most restrictive standard they could find which was floors in residences. They decided on this standard given the fact that babies crawl in

homes and naturally place items in their mouths. According to HUD, the standard for passing a lead wipe test is 40 micrograms per square foot and under. When testing the yellow striping on the artificial turf at the R. Roger Rowe athletic field, those numbers calculat-

At this time, I don’t think there’s any reason to believe that you have a health hazard.” Stephen Waide Scientist, Ninyo &amp; Moore

ed to 8.5 micrograms per square foot. “That’s just about five times less than this really restrictive (HUD) number,” Waide said. “And HUD believes that this level (40) would be fine to send a family back in after our remediation.” In the future, the artificial turf may get more than an 8.5 micrograms reading. Waide’s recommendation was to watch the field for any signs of distress or color fading. He suggested sampling artificial turf swatches, particularly the yellow and blue striping areas and storing them in a box in a dark area. “And once a year, I’d bring them out and put them right next to the representative color on the field and I’d take a picture of them. Then you’d have a year-by-year picture of how much this thing is degrading or fading and then you make some decision down the road when you want to look at this again.” And the retesting could range from five to TURN TO TURF ON 20

Check Out Our Article On Page 19