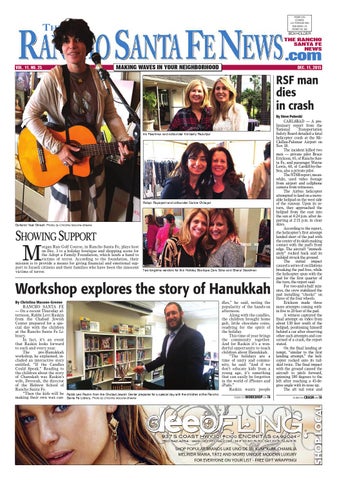 TURN TO WORKSHOP ON 16

organ Run Golf Course, in Rancho Santa Fe, plays host on Dec. 3 to a holiday boutique and shopping scene for the Adopt a Family Foundation, which lends a hand to victims of terror. According to the foundation, their mission is to provide a means for giving financial and emotional support to Israeli citizens and their families who have been the innocent victims of terror.

Workshop explores the story of Hanukkah By Christina Macone-Greene

dles,” he said, noting the popularity of the hands-on afternoon. Along with the candles, the children brought home gelt, little chocolate coins, readying for the spirit of the holiday. This time of year brings the community together. And for Raskin it’s a wonderful opportunity to teach children about Hanukkah. “The holidays are a time of unity and community, he said. “And if we don’t educate kids from a young age, it’s something that can easily be forgotten in the world of iPhones and iPads.” Raskin wants people

CARLSBAD — A preliminary report from the National Transportation Safety Board detailed a fatal helicopter crash at the McClellan-Palomar Airport on Nov. 18. The incident killed two men — private pilot Bruce Erickson, 65, of Rancho Santa Fe, and passenger Wayne Lewis, 60, of Cardiff-by-theSea, also a private pilot. The NTSB report, meanwhile, used video footage from airport and cellphone camera from witnesses. The Airbus helicopter attempted to land on a moveable helipad on the west side of the runway. Upon its return, they approached the helipad from the east into the sun at 4:24 p.m. after departing at 2:11 p.m. in clear skies. According to the report, the helicopter’s first attempt landed short of the pad with the center of its skids making contact with the pad’s front edge. The aircraft “immediately” rocked back and its tailskid struck the ground. The initial impact caused a series of oscillations breaking the pad free, while the helicopter spun with the pad for the first quarter of the turn, the report said. For two-and-a-half minutes, the crew stabilized the pad installing “chocks” on three of the four wheels. Erickson made three more attempts coming within five to 20 feet of the pad. A witness captured the final attempt on video from about 130 feet south of the helipad, positioning himself behind a car after observing other such attempts and concerned of a crash, the report stated. On the final landing attempt, “similar to the first landing attempt,” the helicopter rocked onto its tailskid twice. The final impact with the ground caused the aircraft to pitch forward, spinning 180 degrees to the left after reaching a 45-degree angle with its nose up. The aft tail rotor and