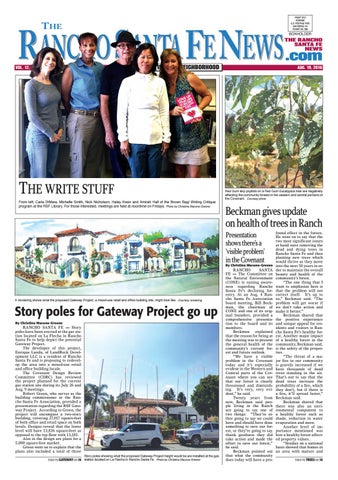 The write stuff From left: Carla DiMare, Michelle Smith, Nick Nicholson, Haley Kwon and Amirah Hall of the Brown Bag/ Writing Critique program at the RSF Library. For those interested, meetings are held at noontime on Fridays. Photo by Christina Macone Greene

Red Gum lerp psyllids on a Red Gum Eucalyptus tree are negatively affecting the community forests in the western and central portions of the Covenant. Courtesy photo

A rendering shows what the proposed Gateway Project, a mixed-use retail and office building site, might look like. Courtesy rendering

Story poles for Gateway Project go up By Christina Macone-Greene

RANCHO SANTA FE — Story poles have been erected at the gas station located on La Flecha in Rancho Santa Fe to help depict the potential Gateway Project. The developer of this project, Enrique Landa, of LandRock Development LLC is a resident of Rancho Santa Fe and is proposing to redevelop the area into a mixed-use retail and office building locale. The Covenant Design Review Committee (CDRC) has reviewed the project planned for the current gas station site during its July 26 and Aug. 9 meetings. Robert Green, who serves as the building commissioner at the Rancho Santa Fe Association, provided a presentation regarding the RSF Gateway Project. According to Green, the project will encompass a two-story building, covering 27,017 square-feet of both office and retail space on both levels. Designs reveal that the lower level will have 13,836 square-feet as opposed to the top floor with 13,181. Also in the design are plans for a 5,000 square-foot market. Green went on to explain that the plans also included a total of three TURN TO GATEWAY ON 16

Story poles showing what the proposed Gateway Project height would be are installed at the gas station located on La Flecha in Rancho Santa Fe. Photo by Christina Macone Greene

RANCHO SANTA FE — The Committee on the Natural Environment (CONE) is raising awareness regarding Rancho Santa Fe’s declining forestry. At an Aug. 4 Rancho Santa Fe Association board meeting, Bill Beckman, the chairman of CONE and one of its original founders, provided a comprehensive presentation to the board and its members. Beckman explained that the reason for being at the meeting was to present the general health of the community’s current forest and future outlook. “We have a visible problem in the Covenant today and it’s especially evident in the Western and Central parts of the Covenant where you can see that our forest is clearly threatened and diminishing. It’s very, very evident,” he said. Twenty years from now, Beckman said people living in the Ranch are going to say one of two things: “They’re either going to say we could have and should have done something to save our forest, or they’re going to say thank goodness they did take action and made the effort to save our forest,” he said. Beckman pointed out that what the community does today will have a pro-

found effect in the future. He went on to say that the two most significant issues at hand were removing the dead and dying trees in Rancho Santa Fe and then planting new trees which would thrive as they move into the next 50 years in order to maintain the overall beauty and health of the community’s forest. “The one thing that I want to emphasize here is that the problem will not correct itself. It’s up to us,” Beckman said. “The problem will get worse if we don’t take action and make it better.” Beckman shared that the positive experience and unique appeal for residents and visitors is Rancho Santa Fe’s healthy forest. Another major impact of a healthy forest in the community, Beckman said, is the safety of the properties. “The threat of a major fire in our community is gravely increased if we have thousands of dead trees standing in the air. That’s not to say that the dead trees increase the probability of a fire, which they don’t, but if there is a fire, it’ll spread faster,” Beckman said. Beckman shared that there was also an environmental component to a healthy forest such as shade, reduction in water evaporation and more. Another level of importance mentioned was how a healthy forest affected property values. “Studies on a national basis showed that homes in an area with mature and TURN TO TREES ON 16