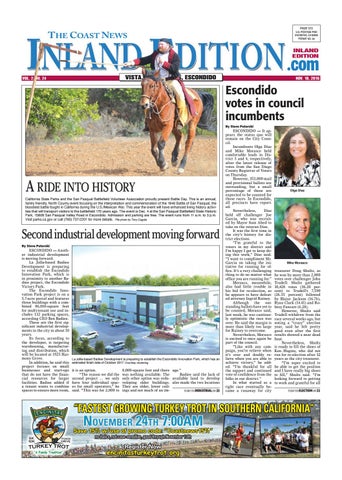 A ride into history California State Parks and the San Pasqual Battlefield Volunteer Association proudly present Battle Day. This is an annual, family friendly, North County event focusing on the interpretation and commemoration of the 1846 Battle of San Pasqual, the bloodiest battle fought in California during the U.S./Mexican War. This year the event will have enhanced living history activities that will transport visitors to the battlefield 170 years ago. The event is Dec. 4 at the San Pasqual Battlefield State Historic Park, 15808 San Pasqual Valley Road in Escondido. Admission and parking are free. The event runs from 11 a.m. to 3 p.m. Visit parks.ca.gov or call (760) 737-2201 for more details. File photo by Tony Cagala

ESCONDIDO — Another industrial development is moving forward. La Jolla-based Badiee Development is preparing to establish the Escondido Innovation Park, which is in proximity to another Badiee project, the Escondido Victory Park. The Escondido Innovation Park project is on a 5.7-acre parcel and features three buildings with a combined 86,010-square feet for multi-tenant use and includes 132 parking spaces, according CEO Ben Badiee. These are the first significant industrial developments in the city in about 10 years. Its focus, according to the developer, is targeting warehousing, manufacturing and distribution, which will be located at 1925 Harmony Grove. In addition, he said this project focuses on small businesses and start-ups that do not have the financial resources for larger facilities. Badiee added if a tenant wants to combine spaces to ensure more room,

La Jolla-based Badiee Development is preparing to establish the Escondido Innovation Park, which has an estimated finish date of October 2017. Courtesy rendering

it is an option. “The reason we did the second project … we only have four individual spaces for small operators,” he said. “This was for 2,000 to

8,000-square feet and there age.” Badiee said the lack of was nothing available. The only other option was rede- available land to develop veloping older buildings. also made the two locations They are older, lower ceilings and not much of an imTURN TO INDUSTRIAL ON 22

ESCONDIDO — It appears the status quo will remain on the City Council. Incumbents Olga Diaz and Mike Morasco held comfortable leads in District 3 and 4, respectively, after the latest release of votes from the San Diego County Registrar of Voters on Thursday. However, 353,000 mail and provisional ballots are outstanding, but a small percentage of those are expected to be counted for those races. In Escondido, all precincts have reported. Nevertheless, Diaz held off challenger Joe Garcia, who was recruited by Mayor Sam Abed to take on the veteran Diaz. It was the first time in the city’s history for district elections. “I’m grateful to the voters in my district and I’m happy I get to keep doing this work,” Diaz said. “I want to compliment Mr. Garcia on taking the initiative for running for office. It’s a very challenging thing to do no matter what office you are running for.” Morasco, meanwhile, also had little trouble in his bid for re-election, as he appears to have defeated attorney Ingrid Rainey. Although the outstanding ballots have yet to be counted, Morasco said, last week, he was cautiously optimistic the race was over. He said the margin is more than likely too large for Rainey to overcome. Nevertheless, Morasco is excited to once again be part of the council. “Like with any campaign, you’re relieve when it’s over and doubly relieve when you are able to achieve victory,” he added. “I’m thankful for all the support and continued vote of confidence from the folks in our district.” In what started as a tight race eventually became a runaway for city

treasurer Doug Shultz, as he won by more than 2,000 votes over challenger John Trudell. Shultz gathered 10,428 votes (36.20 percent) to Trudell’s 7,590 (26.35 percent) followed by Blaise Jackson (16.76), Ryan Clark (14.41) and Robroy Fawcett (6.28). However, Shultz said Trudell withdrew from the race several weeks ago, but noting a “crazy” election year, said he felt pretty good even after the first results showed a near dead heat. Nevertheless, Shultz is ready to fill the shoes of Ken Hugins, who did not run for re-election after 32 years as the city treasurer. “I’m super excited to be able to get the position and I have really big shoes to fill,” Shultz said. “I’m looking forward to getting to work and grateful for all TURN TO ELECTION ON 22