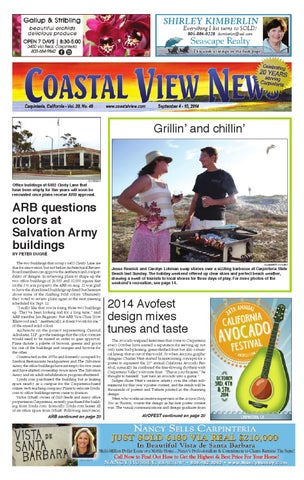 SHIRLEY KIMBERLIN Everything I list turns to SOLD! 805-886-0228 skimberlin@aol.com

This week’s listings on the back page

Ofﬁce buildings at 6402 Cindy Lane that have been empty for ﬁve years will soon be renovated once plans receive ARB approval.

The two buildings that occupy 6402 Cindy Lane are due for renovation, but not before Architectural Review Board members can approve the aesthetics and compatibility of designs. In reviewing plans to shape up the two ofﬁce buildings of 26,000 and 32,000 square feet on the 3 ½ acre property, the ARB on Aug. 28 was glad to have the abandoned buildings updated but hesitant about some of the clashing bold colors. Ultimately they voted to review plans again at the next meeting scheduled for Sept. 11. “I really like that you’re ﬁxing those two buildings up. They’ve been looking sad for a long time,” said ARB member Jim Reginato. But ARB Vice Chair Scott Ellinwood said, “Aesthetically, it doesn’t work for me,” of the mixed solid colors. Architects on the project representing Cearnal Adrulaitis, LLP., got the message that the color contrast would need to be muted in order to gain approval. Plans dictate a palette of browns, greens and grays for one of the buildings and oranges and browns for the other. Constructed in the 1970s and formerly occupied by Sambos Restaurants headquarters and The Salvation Army, the ofﬁce buildings have sat empty for ﬁve years and have shifted ownership twice since The Salvation Army and its adult rehabilitation program shuttered. Lynda.com purchased the building but is leasing space nearby as a campus for the Carpinteria-based online, tech teaching company. Plans to relocate lynda. com to ofﬁce buildings never came to fruition. Victor Schaff, owner of S&amp;S Seeds and many ofﬁce properties in Carpinteria, recently purchased the building from lynda.com. Ironically, lynda.com leases all of its ofﬁce space from Schaff. Following renovation,

Jesse Resnick and Carolyn Lohman swap stories over a sizzling barbecue at Carpinteria State Beach last Sunday. The holiday weekend offered up clear skies and perfect beach weather, drawing a swell of tourists to local shores for three days of play. For more photos of the weekend’s recreation, see page 14.

The avocado-inspired festivities that come to Carpinteria every October have earned a reputation for serving up not only taste bud-pleasing, green-ﬂeshed fruit but also a musical lineup that is out of this world. So when Arizona graphic designer Charles West started brainstorming concepts for a poster to represent the 28th annual California Avocado Festival, naturally he combined the free-ﬂowing rhythms with Carpinteria Valley’s favorite fruit. “This is a no-brainer,” he thought to himself, “just turn an avocado into a guitar.” Judges chose West’s creative artistry over the other submissions for this year’s poster contest, and the result will be thousands of posters and T-shirts printed in the charming design. West, who works as creative supervisor at the Arizona Daily Star in Tucson, counts the design as his ﬁrst poster contest win. The visual communications and design graduate from