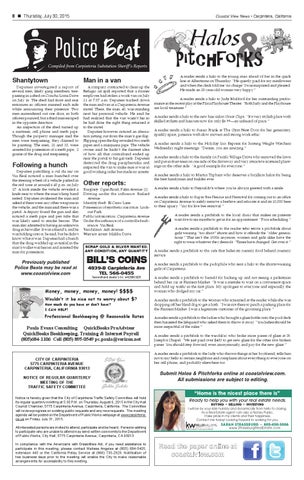 Deputies investigated a report of several men, likely gang members, trespassing in a shed on Concha Loma Drive on July 16. The shed had front and rear entrances so ofﬁcers manned each side while announcing their presence. Two men surrendered out one door, so both ofﬁcers pounced, but a third man escaped in the opposite direction. An inspection of the shed turned up a mattress, cell phone and meth pipe. Though the property manager said the men were trespassing; they claimed to be painting. The men, 28 and 33, were arrested for possession of a meth pipe, .2 grams of the drug and trespassing.

Deputies patrolling a cul du sac on Via Real noticed a man hunched over the steering wheel of a vehicle parked in the red zone at around 6:45 p.m. on July 17. A look inside the vehicle revealed a knife near to where the man’s limp hand rested. Deputies awakened the man and asked if there were any other weapons in the vehicle, and the man said there was a pistol. A deputy found the gun and also noticed a meth pipe and pen tube that was likely used to smoke heroin. The man also admitted to having an unknown drug in his wallet. It was a friend’s, and he was holding onto it, he said, but he didn’t know what it was. Deputies had a hunch that the drug wadded up in tinfoil in the man’s wallet was heroin and arrested the man for possession.

Previously published Police Beats may be read at www.coastalview.com

Man in a van

A company contracted to clean up the Refugio oil spill reported that a former employee had stolen a work van on July 21 at 7:57 a.m. Deputies tracked down the man and van at a Carpinteria Avenue motel. There, the man, 40, was standing next his personal vehicle. He said he had realized that the van wasn’t his so he had done the right thing returned it to the motel. Deputies however noticed an aberration jutting out from the man’s gas ﬂap. Flipping open the ﬂap revealed two meth pipes and a marijuana pipe. The vehicle owner said he hadn’t the faintest idea of how all that contraband ended up near the portal to his gas tank. Deputies destroyed the drug paraphernalia and inspected the van to make sure it was in good working order but made no arrests.

CITY OF CARPINTERIA 5775 CARPINTERIA AVENUE CARPINTERIA, CALIFORNIA 93013 NOTICE OF REGULAR QUARTERLY MEETING OF THE TRAFFIC SAFETY COMMITTEE Notice is hereby given that the City of Carpinteria Trafﬁc Safety Committee will hold its regular quarterly meeting at 5:30 P.M. on Thursday, August 6, 2015 in the City Hall Council Chamber, 5775 Carpinteria Avenue, Carpinteria, California. The Committee will review progress on existing public requests and any new requests. The meeting agenda will be posted on the Department of Public Works webpage at www.carpinteria. ca.us on Friday, July 31, 2015. All interested persons are invited to attend, participate and be heard. Persons wishing to participate who are unable to attend may send written comments to the Department of Public Works, City Hall, 5775 Carpinteria Avenue, Carpinteria, CA 93013. In compliance with the Americans with Disabilities Act, if you need assistance to participate in this meeting, please contact Melissa Angeles at (805) 684-5405, extension 445 or the California Relay Service at (866) 735-2929. Notiﬁcation of two business days prior to the meeting will enable the City to make reasonable arrangements for accessibility to this meeting.

Submit Halos & Pitchforks online at coastalview.com. All submissions are subject to editing. “Home is the nicest place there is” Ready to help you with your real estate needs. Buying • Selling • inveSting

I will be by your side humbly and dynamically from hello to closing. As a Real Estate agent I am also a Notary Public. I take pride in my clients and their happiness. Contact me today! Looking forward to working for you.

Read the paper online at coastalview.com