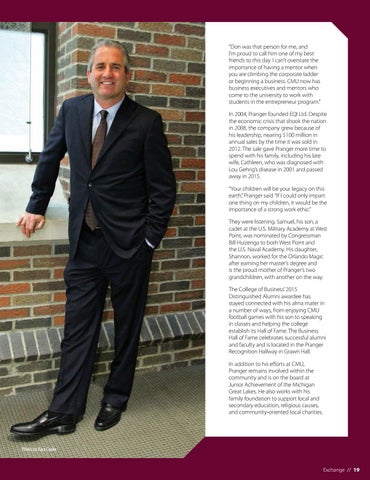 “Don was that person for me, and I’m proud to call him one of my best friends to this day. I can’t overstate the importance of having a mentor when you are climbing the corporate ladder or beginning a business. CMU now has business executives and mentors who come to the university to work with students in the entrepreneur program.” In 2004, Pranger founded EQI Ltd. Despite the economic crisis that shook the nation in 2008, the company grew because of his leadership, nearing $100 million in annual sales by the time it was sold in 2012. The sale gave Pranger more time to spend with his family, including his late wife, Cathleen, who was diagnosed with Lou Gehrig’s disease in 2001 and passed away in 2015. “Your children will be your legacy on this earth,” Pranger said. “If I could only impart one thing on my children, it would be the importance of a strong work ethic.” They were listening. Samuel, his son, a cadet at the U.S. Military Academy at West Point, was nominated by Congressman Bill Huizenga to both West Point and the U.S. Naval Academy. His daughter, Shannon, worked for the Orlando Magic after earning her master’s degree and is the proud mother of Pranger’s two grandchildren, with another on the way. The College of Business’ 2015 Distinguished Alumni awardee has stayed connected with his alma mater in a number of ways, from enjoying CMU football games with his son to speaking in classes and helping the college establish its Hall of Fame. The Business Hall of Fame celebrates successful alumni and faculty and is located in the Pranger Recognition Hallway in Grawn Hall. In addition to his efforts at CMU, Pranger remains involved within the community and is on the board at Junior Achievement of the Michigan Great Lakes. He also works with his family foundation to support local and secondary education, religious causes, and community-oriented local charities.