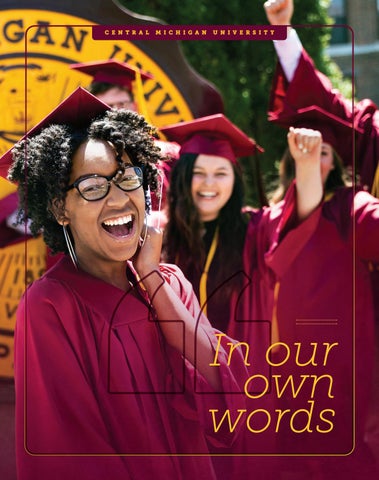 In our own words

have at CMU, but that’s not really true. There are a lot of words to describe it. Hear it straight from those who live and breathe it: your future classmates, friends, colleagues and professors.

Alanna Sparks thought her brain cyst diagnosis in 2018 would mean the end of her time at CMU. She’s set to graduate with a degree in photojournalism this year. Read her story – Page 8

I thought I knew what to expect, but it turned into something better.â&#x20AC;? Yvon Bergner, junior

If you don’t know what you want to do, that’s OK. It’s not going to stop you from succeeding.” Quinton Mitchell, senior

You can come here with an idea about the future, but you’ll be amazed where you end up.” Cole Phillips, junior

CMU values students. We play a huge role on campus. Every student has a voice.â&#x20AC;? Brett Houle, sophomore

A lot of schools are only focused on scores, but CMU is about you as a person, too.â&#x20AC;? Katie Avery, junior

I’ve had professors stay after class and check on me. They want me to do well. It made me think,‘Wow, they really do care.’” Makenzie Morales, senior

Fight for maroon and gold

Alanna Sparks couldn’t even peek out from under her stack of blankets. The junior’s migraines had gotten worse, making any light seem as though it was a flash from her camera.

Treatment meant undergoing brain surgery. Doctors placed a shunt in her brain, where it will remain for her entire life, to relieve pressure and drain fluid from the cyst.

She initially chalked it up to regular college stress, dehydration and a lack of caffeine.

As she sat listening to the doctor explain the situation to her mother over the phone, Alanna was left wondering about her future. She had chosen CMU specifically for the photojournalism program and the award-winning professors who could help her be the best.

“When I started getting sick, that’s when my roommate started to worry,” the Toledo, Ohio, native said. They were so concerned, one of her roommates took her to the local emergency room. The staff took Alanna back to get a CT scan. Shortly after, a doctor came in and asked her how she got to the hospital that day. “He didn’t believe me when I told him I walked in,” she said. “He told me I shouldn’t be able to walk.” It turned out Alanna had a massive cyst in her brain, something doctors later found out had been there her whole life.

She knew the diagnosis would mean leaving CMU, at least temporarily. What she found was CMU refused to leave her. While in the hospital recovering from brain surgery, Kent Miller, a photojournalism faculty member and a close mentor, sent Alanna photos of elephants he had taken during his visit to Kenya. He had remembered how much Alanna loved elephants after having her in class. He also remembered what Alanna meant to CMU, especially the photojournalism program and her peers.

Not many schools are worth coming back to after brain surgery, but Central is my home.” 8

“She’s incredible,” Miller said. “The way she lifts people up by her presence, her smile, her encouragement of other people. I think that she being who she is has strengthened the program because we need that positive reinforcement she provides.” He also wasn’t about to let Alanna forget the support she had from her family on campus. Everyone from faculty to students were there with her through this journey. “CMU students are amazing individuals,” Miller said. “They’re happy to be here. They lift each other. If we lift each other up, we’re better off. That can only lead to better things.” Support poured in from more than those who knew Alanna personally. CMU Chippewas who had never met her rallied around her, helping cover twothirds of her medical bills after hearing her story.

“That’s what CMU is about: family,” Alanna said. “Chips rally. That’s Central to me. Everyone is just so supportive.” That is what brought Alanna back, and it has helped her thrive while facing what she calls the scariest time of her life. Alanna’s surgery was in February 2018 and by June, she underwent hours of therapy to relearn how to walk.

She works for Central Michigan Life, the student-run newspaper on campus. She’s following her dream and credits being part of the CMU Chippewa family.

She missed her CMU Chippewa family and was determined to return to class. “Not many schools are worth coming back to after brain surgery, but Central is my home,” Alanna said. “I love that something so far from home can feel like home.” Now back at CMU and once again on her path to a career in photojournalism, Alanna graduates in December 2020.

I’m usually very reserved and shy, but here I’m comfortable. I received so much support, and I’ve done so much more because of it.” Tamia Briscoe, senior 10

We are a community here at Central. We have students who really care about each other. That matters.” Joseph Sommers, faculty English language and literature

You’re a part of a team, and you have friends for life.” Carlos Clark, senior 11

Everyone wants to be student-centered, but this is the best place Iâ&#x20AC;&#x2122;ve worked. Students can study here and flourish.â&#x20AC;? Shayesteh Jahanfar, faculty Health sciences

Student leaders are making an impact with the work they’re doing and are learning how to lead.” Mary Miller, senior

Some people say you’re too young or it’s too early to get an internship, but I earned one freshman year.” Emily Houde, sophomore

What will your CMU experience be? Fuel your passion. Ignite your future. Join the CMU Chippewa family. Fire Up Chips! Take your next steps to becoming a CMU Chippewa.

Set up your CMU account and reserve your place in the incoming class by submitting your one-time enrollment reservation deposit at admissions. cmich.edu/enroll.

Schedule your orientation. Sessions are held from April through August. Registration is now open at cmich.edu/ orientation.

Stay up to date on all things CMU. Check out #LifeAtCentral to see what you can experience here.

Personal Impact ’20 - In our own words

Personal Impact ’20 - In our own words