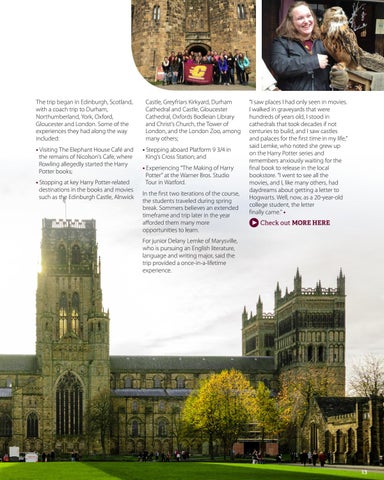 The trip began in Edinburgh, Scotland, with a coach trip to Durham, Northumberland, York, Oxford, Gloucester and London. Some of the experiences they had along the way included: • Visiting The Elephant House Café and the remains of Nicolson’s Cafe, where Rowling allegedly started the Harry Potter books; • Stopping at key Harry Potter-related destinations in the books and movies such as the Edinburgh Castle, Alnwick

Castle, Greyfriars Kirkyard, Durham Cathedral and Castle, Gloucester Cathedral, Oxfords Bodleian Library and Christ’s Church, the Tower of London, and the London Zoo, among many others; • Stepping aboard Platform 9 3/4 in King’s Cross Station; and • Experiencing “The Making of Harry Potter” at the Warner Bros. Studio Tour in Watford. In the first two iterations of the course, the students traveled during spring break. Sommers believes an extended timeframe and trip later in the year afforded them many more opportunities to learn.

“I saw places I had only seen in movies. I walked in graveyards that were hundreds of years old, I stood in cathedrals that took decades if not centuries to build, and I saw castles and palaces for the first time in my life,” said Lemke, who noted she grew up on the Harry Potter series and remembers anxiously waiting for the final book to release in the local bookstore. “I went to see all the movies, and I, like many others, had daydreams about getting a letter to Hogwarts. Well, now, as a 20-year-old college student, the letter finally came.” • Check out MORE HERE

For junior Delany Lemke of Marysville, who is pursuing an English literature, language and writing major, said the trip provided a once-in-a-lifetime experience.

Newsletter of the College of Humanities & Social & Behavioral Sciences

Newsletter of the College of Humanities & Social & Behavioral Sciences